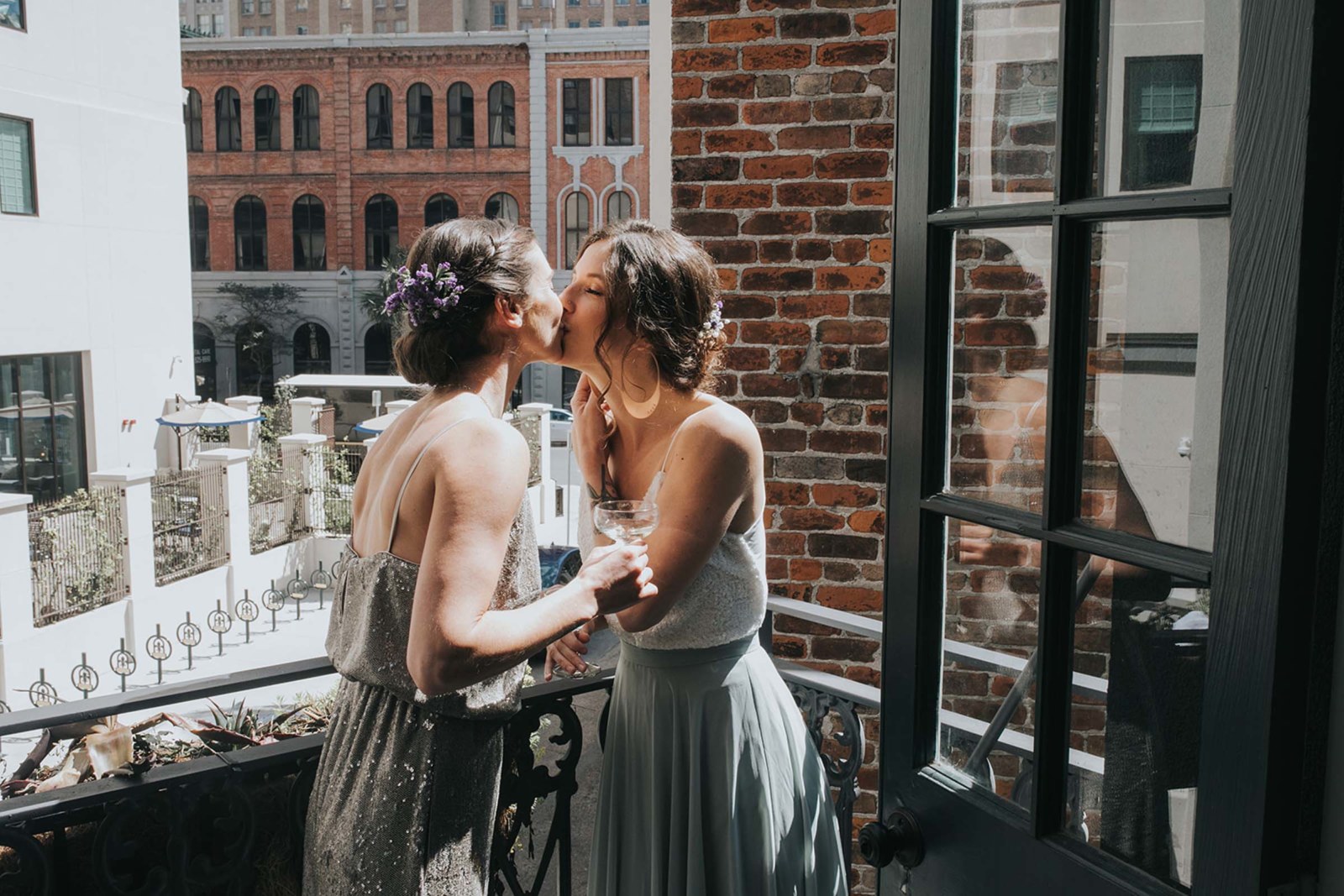 Kim proposed. It was in the backyard of the house in Virginia when Juliet was still a veterinary student. We were sitting on a little love seat, and it was the night before Juliet’s birthday. Kim didn’t get down on one knee, so Juliet had no idea she was even proposing. In fact, Juliet just thought she was cute and romantic.

When she said, “are you going to marry me?” Juliet replied, “yea, I already told you I would!” and then Kim pulled the ring out of her pocket, and Juliet finally realized what was going on and burst into tears- and said yes for real.

They were engaged for nine months before they married.

They debated for a while on the wedding’s size and venue – they considered a big potluck in a field, something intimate with close family and friends, local to their home, something far away. Everything ended up feeling stressful and complicated for the lovers, especially Juliet’s packed veterinary school schedule.

In the end, a “planned elopement” somewhere easy and fun felt truly authentic to them. They promised our closest loved ones that they would share awesome photos [thanks, Ollie] and make FaceTime calls, and they gave the couple all their love and support. The theme of the wedding was ‘us’ and ‘celebrating finding our person.’

Kim ordered a gold sequin jumpsuit, but it didn’t fit her quite right, so Juliet tried it on, and it was perfect. Kim’s accessories had a lot of special details – her shoes [white flats, so it was easy to walk around the city all day] said “hello” “love”; one word on each shoe. Her rose gold earrings not only coordinated with her rose gold engagement ring but also read “true” “love”; again, one word stamped into each earring.

They got married in March and spent the night before in the master suite of a cute boutique hotel in New Orleans [the Catahoula], which had the perfect little balcony. The room & balcony itself was the venue for their vows.

The morning of, they had their hair and make-up professionally done and got themselves dressed before 11 am. Leaving the two of them essentially “all dressed up with nowhere to go”. Completely ready an hour early in their hotel room, waiting for the officiant.

Kim started to spend this hour pacing nervously. So Juliet decided a pre-ceremony glass of champagne was needed to calm the nerves.

By 12.30, they were officially married on their little hotel balcony with only a few tears shed. Ollie [the photographer] and their officiant were the only witnesses. After the officiant said his goodbyes, it was time for a toast on the balcony!

Early afternoon found the newlyweds [and Ollie, of course!] sitting at the bar at Peche in our sequins, dining on oysters and Sazeracs – their favorite.

The rest of the day was spent wandering the city while drinking bubbles, soaking in the New Orleans sun.

Photography by Love is Rad