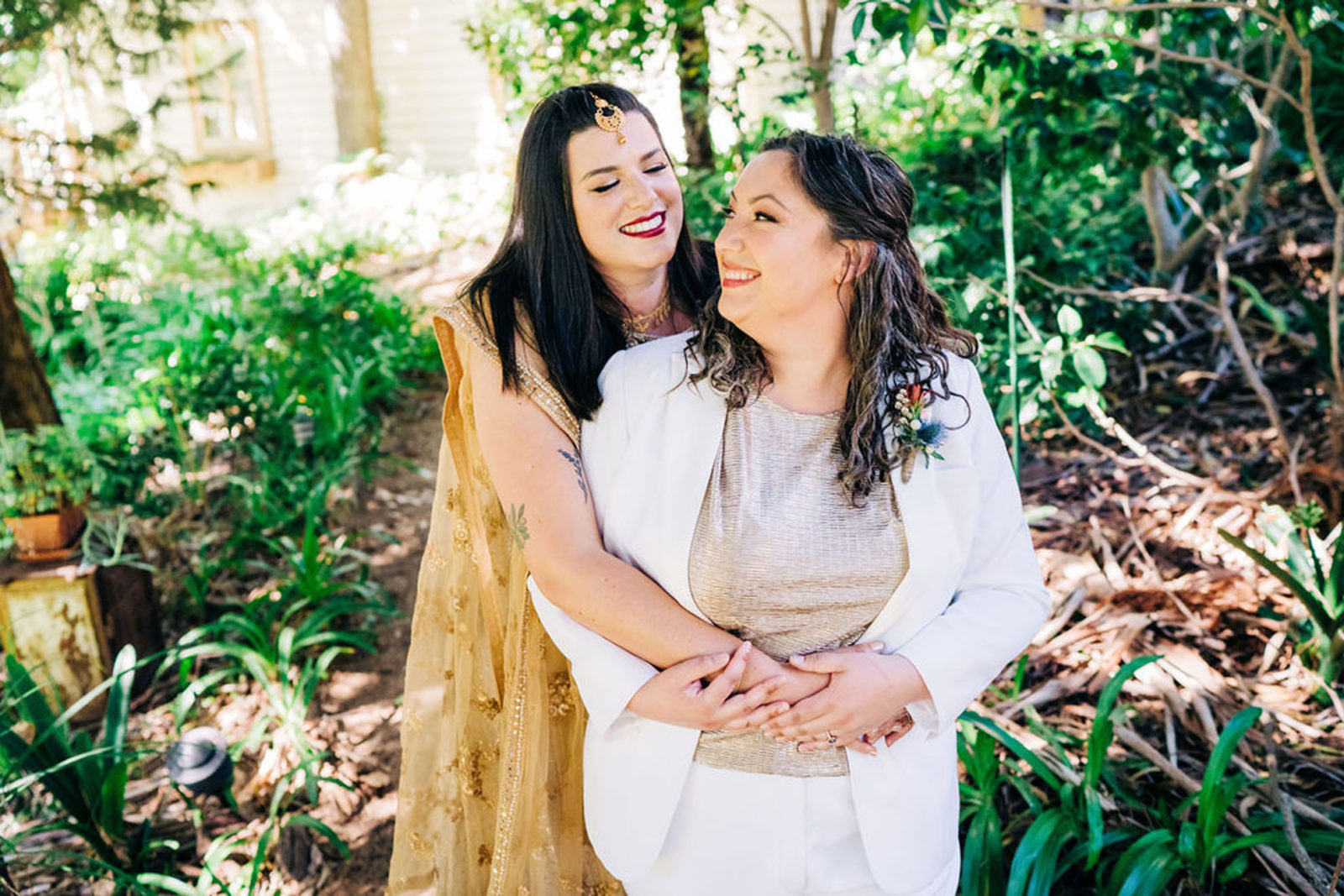 Kari & Rina have been together for just over two years, and they met on Tinder. Kari had written on her profile that she loved Mexican food. So, Rina knew that at least they would have that in common! Naturally, their first date was at a Mexican restaurant. Where it became clear that we had a lot more in common than our love for tacos and margaritas.

We’d talked about marriage as a concept and debated the merits of the ‘institution’ several times because of feminism. One night, not long after our first anniversary, we were chilling on the couch during hard lockdown 2.0. Rina asked Kari if she wanted to get married. She was like, “you know I do,” but then Rina asked if Kari wanted to marry her specifically. Then it became clear that this was a proposal. Kari didn’t have to hesitate, and the answer was yes.

What led you to Norton Summit?

Norton Summit is a town special to both Rina and Kari – Rina lived there for the first two years of her life, and Kari’s dad used to take her and her brother on day trips to Norton Summit. When we were looking for a venue, we were generally looking in the Adelaide Hills. Our criteria were pretty much just being in nature and low-key. Then, we came across Sinclair’s Gully Winery, and not only did it tick the boxes, but it was also in Norton Summit!

Did you undertake any DIY projects for the big day?

While a florist put together the bouquet/boutonniere/arbor, we got loose flowers to put together vase arrangements. We had a couple of close friends over the day before the event to do this and put together our favors, which were native floral seeds that we had selected to put into little envelopes that said: “Let Love Grow.”

Talk to us about your experience finding the perfect outfits.

We both struggled to find the perfect outfit. Kari had a clear idea of what she wanted – a white suit with a satin strip down the side. The only problem with this was finding a suit that was flattering on her body when suits shops are often targeted at men and don’t specialise in suits for other body types. However, after more alteration sessions than she would have liked, she was finally able to get to a point where she felt comfortable in the suit.

Rina knew that she wanted to wear gold, but she wasn’t quite sure what it would look like. She asked her mum for ideas about where she could find an outfit that reflected her cultural heritage. But, like many others, she asked, the response of “usually we would just go to India to find an outfit” wouldn’t work out due to COVID. So on a trip to Sydney to visit her friends, she spent a day searching Indian clothing shops for the type of outfit she had in mind. Eventually, her friend encouraged her to look at something that wasn’t as “gold” as the idea Rina had considered, and it ended up being perfect.

People always say their wedding day was the best day of their lives, and I don’t think we really understood that until our wedding, regardless of any stress or obstacle on the day. So the fact that we got to stand in front of our families and publicly commit ourselves to each other meant that it was perfect.

We loved the speeches our family did for us, but Kari’s youngest brother’s speech took the cake (so to speak!). He had us all sobbing after his beautiful words about always looking up to Kari his whole life and all the things she taught him. Especially that it is not just okay to be gay, it’s great.

Rather than traditions dictating what we did, we wanted to move away from tradition at our wedding instead of cultivating a day that reflected who we were as a couple. Rina comes from a religious family, but her dad offered support for this when he told Rina that he and her mum’s day was quite stressful. With so many people telling them what they should and shouldn’t do.

Marriage was a very personal decision to make a public and formal commitment to each other. Which echoes the beliefs that we both already held about our relationship and what we want for our lives as individuals and a couple. While we don’t believe a legal recognition of our commitment is required to make it valid. It was important for us to include our friends and families in a celebration of our relationship. Above all, it was a commitment to one another to love each other the best we could and build a happy life together.

Telling our families that we were getting married was pretty nerve-wracking. Rina was worried that her mum might not support the marriage. While her mum had expressed her support for her relationship with Kari, there were some tough times in previous years after Rina came out.

Her mum surprised her by not only being supportive of the wedding but also being excited about it.

We were so, so lucky to have the support of our families. We feel for people who may not have support from those closest to them and want to say that things do get better. And there is a community out there who will support you even if your family doesn’t.