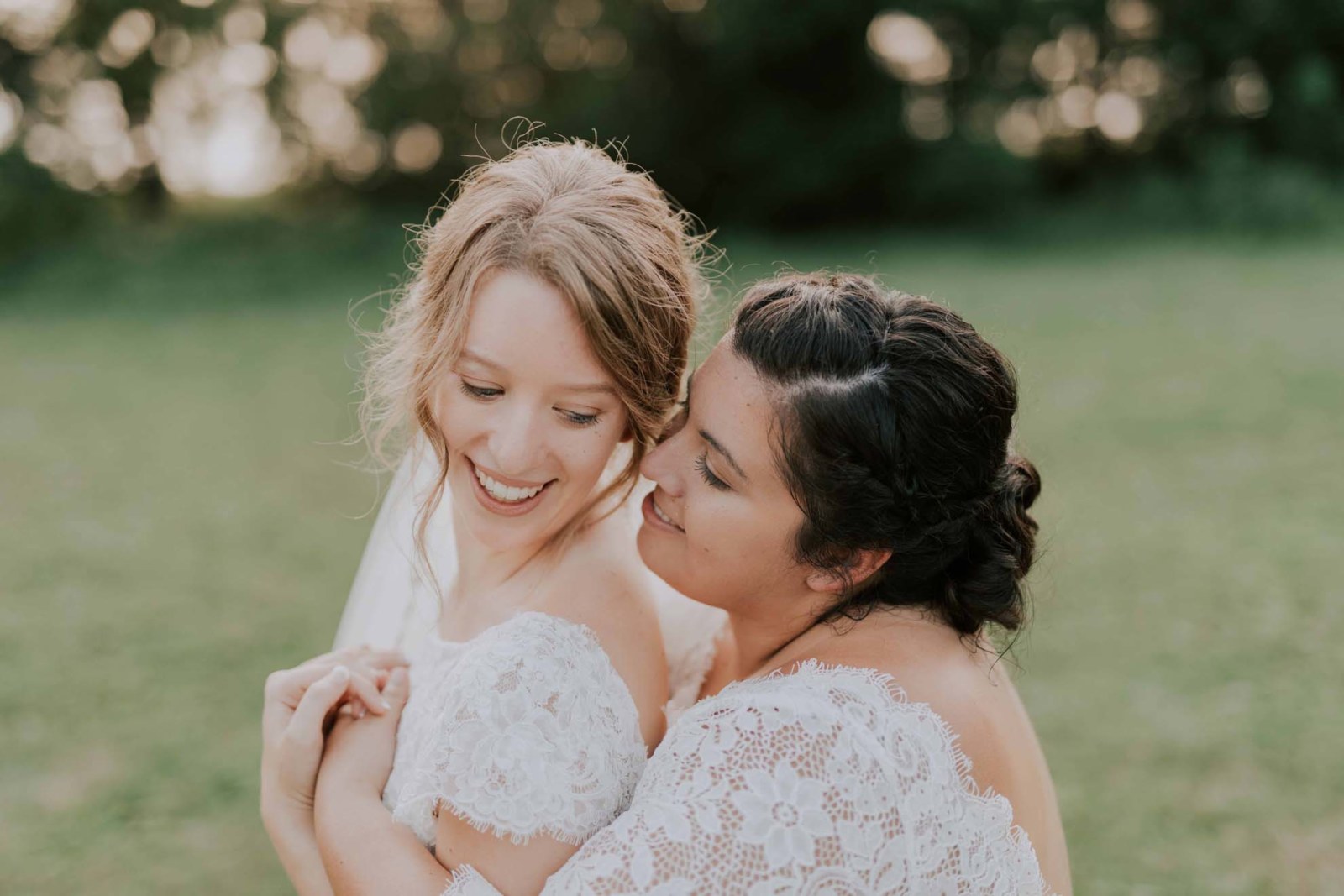 Karla and Kelsey knew each other in middle school, but Karla was loud, and Kelsey stayed away from loud people. They began talking when Karla literally bumped into Kelsey in the hallway at the end of their high school sophomore year. For the rest of the year, they sat together at lunch.

The following school year, they found themselves in chemistry class together [fitting] and continued to have lunch together. Karla was always getting into trouble and being scolded by the teacher for talking to Kelsey, others, and basically anyone who would listen. Kelsey thought Karla’s bubbly personality was very entertaining.

They started dating at the end of junior year in June 2010 and have been together since.

Kelsey: One weekend, my whole family decided to have dinner and then take a family picture out at the farm owned by my family. By the time we left the restaurant, it was pretty dark outside, and I was concerned about this picture we were supposed to be taking. I was invited into a different car than Karla, and after a brief pit stop, we finally arrived at the barn.

I came around the corner of the barn, and the first thing I noticed was Karla’s voice shaking as she greeted me. As a woman never short of words, I began to piece it all together. I saw everybody seated on benches behind two chairs that were placed front and center.

The chairs were facing a big white sheet and projector. Karla turned on a movie she had created, and I understood why it needed to be dark outside.

Clips of Disney movies and tv shows then transitioned to clips of me as an infant, gradually growing up before the camera. I remarked at one point, “Am I dying?!” and everybody laughed. The video ended with moments of us going through life together. It also included clips from her family who live in Mexico waving to the camera.

After the movie, the white sheet was removed and inside the barn were string lights, a rug, flowers, pillows, and pictures. Music began playing as Karla invited me up to the rug. In front of our family, she probably said something kind, honestly – I have no memory of what she said. Soon, though, she was down on one knee, and I said yes.

We all enjoyed some cupcakes and admired her decorating handy work. I had no idea that she had been working on it for years!

Karla: I planned the proposal for two years! I wanted the proposal to be perfect. I had the most amazing person in my life, and I wanted her to feel how she makes me feel every day.

Kelsey: We asked a close friend of ours to get ordained and perform the ceremony. I am so happy that we asked him because it brought a whole new element to the ceremony and made it more personable.

When it came to finding the perfect dress, I had tried most bridal shops in our area. I liked one dress in particular, but my heart wasn’t set on it.

Then one cold day in January, my Mum and I took a road trip to Brides and Weddings in Manchester, Iowa. They were terrific, and I ended up picking my dress. I saw Karla’s dress from start to finish. Karla saw my sample dress, but she did not see my dress until the first look.

Karla: Kelsey came with me to find my wedding dress. I wanted to represent my personality. When I saw that my dress had pockets [!], I knew it was the one.

Kelsey: When the wedding day rolled around, our drive to the barn that morning was so fun and full of excitement. Getting ready was full of anticipation, and our first look was perfect even though I had seen her all morning.

Another memory is a few minutes before the ceremony, my Uncle offered to Facetime with my Grandma during the ceremony. She had been put in the hospital just a few days before, and it was disappointing not having her there. The ceremony started a few minutes late as we waited for Facetime to connect, but I didn’t mind in the least. Getting it to work and having her there far outweighed starting on time. They eventually got it to work (the nurses helped on her end of the phone!), and we could speak for a few moments. She had me in tears, and that did not bode well for the rest of the ceremony. One of my favorite photos is my Uncle following my Dad and myself down the aisle holding the phone. She had the best seat in the house!

Karla: Our wedding day was the best day of my life. Both my family and friends were there, and there was an atmosphere of love. I danced the WHOLE night.

I have two favorite moments. One was my first dance with my wife. I could not stop staring at her! Kelsey looked so beautiful under the lights of the barn. I just kept thinking to myself that this was the moment I had been waiting for since we met, and we made it.

My second favorite moment was singing with my Dad. We sang Poco Loco – from the movie Coco.

Kelsey: Enjoy the anticipation. The planning is great and wonderful to do together. But anticipating the whole day was the most exciting for me. I had no idea, rain or shine. Would it all come together or be a mess. Would anyone show up? Who knew! I just wanted to be married!

Also, I recommend asking someone to handout corsages and boutonnieres. After I inquired, we had extra, and I realized that some relatives who should have gotten one did not.

Karla: My advice is to enjoy the time with your partner. Have fun, try not to stress. It will all be over before you know it, and when you look back, you’ll want to remember how much fun you had.

Dani & Michaela – Coming Out and Falling in Love with a Woman

Emma & Kirsty – An Entire Wedding Weekend at a Barn