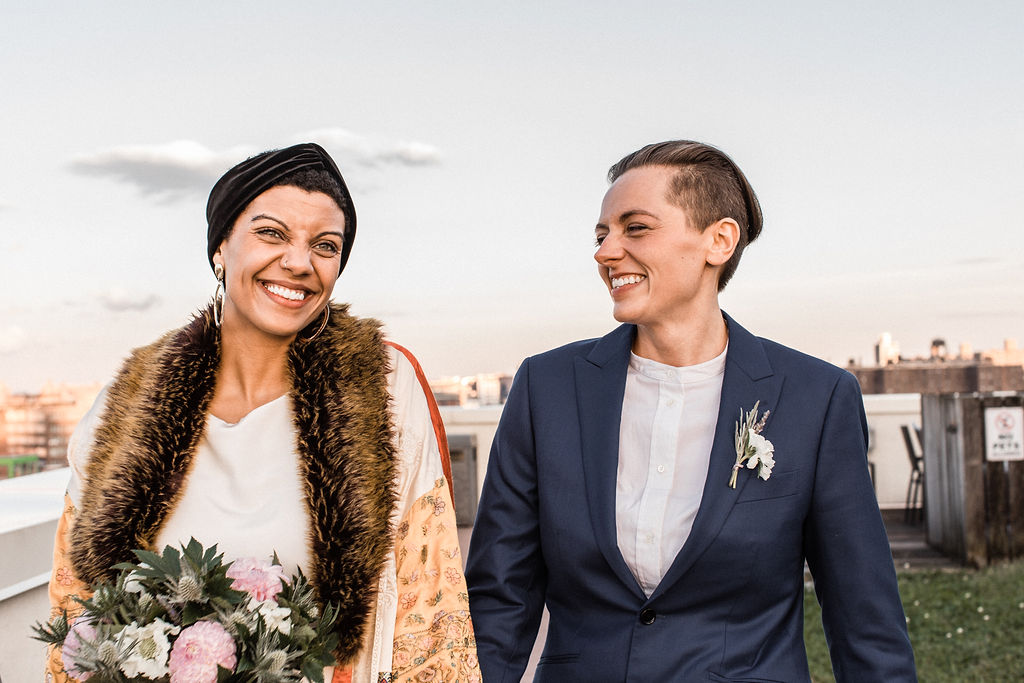 We met in 2014 at the annual prom event for “QDP,” a queer dance party hosted monthly by friends of ours here in Nashville. Four years after we met, on the anniversary of our QDProm event, Suz proposed outside the diner where we shared our first kiss!

We traveled to New York at least twice a year and knew it was the perfect place for us to get married. New York offers such an effortless vibe and is such a welcoming city. We got engaged in March and married in October.

Our process was so simple. Once we contacted Amy and Victoria, they made everything so easy and seamless. All we had to do was show up! The only things we were sure about were getting married and having pizza for dinner. So that’s exactly what we did.

Susannah was a bit nervous about where to start because she wanted a custom suit. Indochino was the perfect place. They had a woman doing fittings the first time she went in. Indochino was super knowledgeable and helpful in understanding how Suz wanted to suit to fit. They had so many options and really nailed to look Suz wanted. I had always loved the simplicity of Sarah Seven’s designs. I reached out to LVD (a local consignment shop for designer gowns), and they happened to have a sample of the dress I dreamed of in my size. It was fate!

We had almost gotten to our ceremony destination when we realized that we left our rings back at the hotel. Usually, it would have been a freakout moment for both of us, but we were having so much fun that we just got a car back to the hotel to pick them up – which only offered us more time for some cool photo ops!

We snuck up to the top of an apartment building in Brooklyn. The sun was beginning to set over the Manhattan skyline. We were the only ones up there; it was so intimate, yet we were saying our vows in front of the whole city at the same time. Victoria brought us doughnuts and champagne. We stayed at the rooftop bar while we watched the sunset.

We Facetimed with both of our families before and after the ceremony! It was important to us that they still felt included even though they weren’t there physically.

For us, marriage is a public affirmation of our commitment to each other. Living in the south can sometimes have its challenges. Having someone to walk through every day is the most comforting thing in the world.

Aimee & Jaye – A Modern Courthouse Elopement in the City