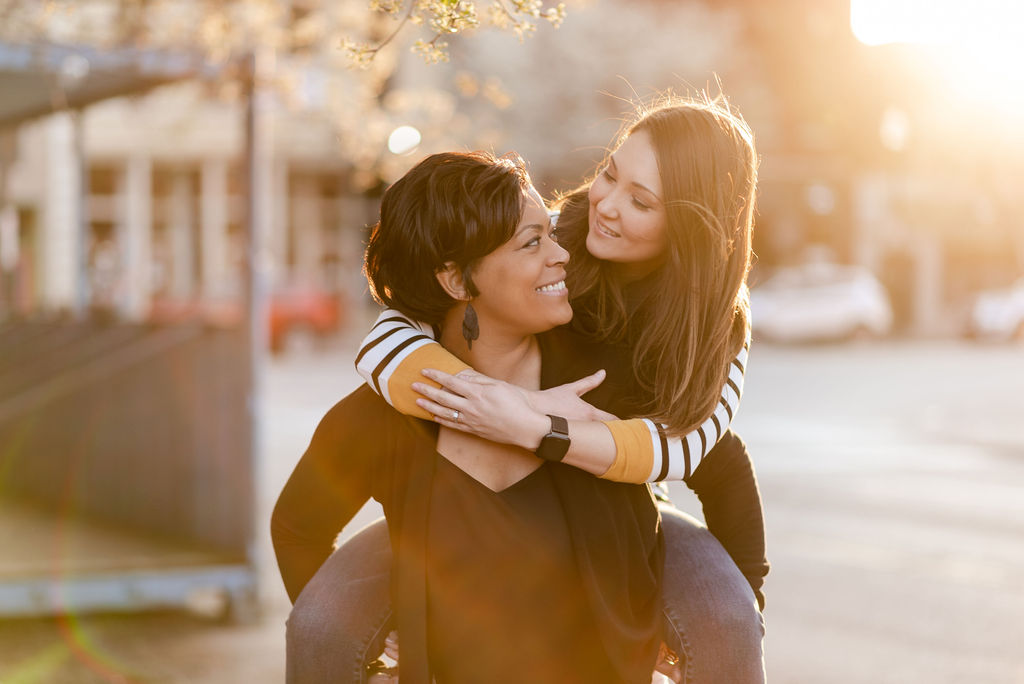 Kimberly and Melissa’s love story started with a Deathly Hallows tattoo, that grew into a Harry Potter inspired proposal. Eventually they’d enter a competition to win a wedding – which they did!

Tell us a little about yourselves?

Kim is a nurse at Cleveland Clinic in a post-anesthesia recovery unit. I’m a District Manager with the Boston Beer Company managing the Cleveland area. We like to play board games, enjoy happy hours with friends, play adult rec sports, and get adventurous with new cooking recipes.

Kim and I have been together since June of 2019 and are about to celebrate our 1st anniversary. We had seen one another on Bumble, but Kim didn’t swipe right! We met a few weeks later at an LGBTQ+ social mixer for Stonewall Sports Cleveland. Kim was new to Cleveland, having recently moved from Philadelphia. She missed the deadline for kickball and decided to still come to the mixer to meet new people. I’m on the board of the non-profit and was there with my team. I recognized her from Bumble and struck up a conversation, and the rest is history.

Melissa and I had discussed how we each felt about marriage and planned to spend our lives together. But she had no clue that I was planning to propose. Melissa’s cousin Mika and her family were coming from Texas to Ohio to her dad’s for Christmas. I messaged Mika, and we sneakily figured out what kind of ring Melissa might like. Mika’s dad (also in on the secret) invited us to join them for what Melissa thought was just Christmas dinner. Little did she know that an even greater surprise was waiting for her underneath the Christmas tree!

After deciding to propose and reflect on our mutual love of Harry Potter, I chose to incorporate that into the proposal. I purchased Harry Potter and the Half-Blood Prince and spent a full day (while Melissa was out of town) hollowing out the book. The package was wrapped like a parcel from Hogwarts. I made it so the book would open to the ring and the chapter, The Unbreakable Vow. Melissa didn’t notice that everyone in the room was taking pictures or that I had been down on bended knee behind her as she opened it waiting for her answer. She was so surprised she forgot to answer! Finally, she replied with a very emphatic, resounding YES!

Right after Christmas, I ordered the custom ring I’d chosen for Kim and thought about how I wanted to propose. In January, Kim and I were flying home from a short business trip to Vegas. While we were waiting to board our flight, I scrolled across something on my Facebook timeline that said Ohio Wedding Giveaway. I thought for sure that it had to be fake or spam, but on the off chance that it wasn’t, I saved it.

The post was by a non-profit called Rai of Love that was donating an entire wedding to a couple in need. That evening back home, I noticed that among the other photos, their page also had an engagement photograph of two women and thought to myself, “So there’s a chance!”

On January 16th, I sent in a video submission, telling our story. I poured my heart into describing our unsupportive families who won’t come to the wedding, Kim having gone back to nursing school to save lives, and how if we were chosen, I’d like to make the whole thing a surprise and propose to Kim.

Unbeknownst to me, my close friends I had told about my secret submission also submitted essays nominating us to win. Jodi Hutton (our wedding photographer and founder of Rai of Love) chose us to win! She contacted my cousin in Texas, who worked with our best friends in Ohio and set a plan to surprise both Kim and I in February.

That evening our friends convinced us to go to our local gay bar, Twist, for a post dodgeball drink. We didn’t know that Jodi and her amazing team of vendors wanted to surprise us with the news, just like I’d planned to surprise Kim. The entire Stonewall Sports league was in on it, and our best friends had brought Kim’s engagement ring with them. Rai of Love announced to everyone that we had won a free wedding, and I was able to give the love of my life, a ring that promised her forever. We were surrounded by excitement, happiness, and more importantly, the love of our close friends.

Any stories from the lead up to the proposal, stressful or funny?

K: Trying to hollow out the book in secret was hard. Trying to keep it a secret, in general, was hard!! I also had to devise a plan to safely hand off the book to Mika without Melissa’s knowledge. I wanted to make sure the book was already on-site to make it look like it had been delivered by Owl Post.

M: I was a wreck leading up to my proposal. I kept checking my email and Rai of Love’s Facebook account, waiting to see what couple was selected.

I had a backup plan for my proposal if we weren’t chosen. They were supposed to announce the winner on February 6th. But because they were working on their surprise party reveal, we didn’t find out until February 9th!

What lead you to the destination of the proposal?

K: I had never been to the house I proposed in. I knew I wanted to do it at Christmas since it is Melissa’s favorite holiday. She grew up a Jehovah’s Witness and didn’t celebrate Christmas until she was 21. It was perfect timing that Melissa’s cousin and best friend was in town, and I could have some of her family present.

M: We had gone to Twist every other week during summer, but it will forever hold a special place in my heart, knowing I asked Kim to spend forever with me there.

Both of our rings are from Diamonds Direct in Cleveland. Kim went there because she liked their ring selection online. She fell in love with my ring but wanted to make sure she loved it in person. After Kim proposed, she had glowing reviews of the store and the salesperson, Allison Ramos. We had to get my ring resized, and I was also impressed with their inclusivity and customer service. I emailed Allison a photo of the ring I thought Kim would love, and they were able to custom create it in house.

What does your engagement mean to you both, has anything changed?

Kim says that she doesn’t feel as though anything has changed. We are still the same two silly people who fell in love that fateful summer evening. To me, our engagement is the start of an exciting new chapter of a book that already had a stellar beginning. We get to create a life the way we want, writing our journey in life through love. To get the chance to love generously and live honestly is a blessing; to do it forever with her is a miracle.