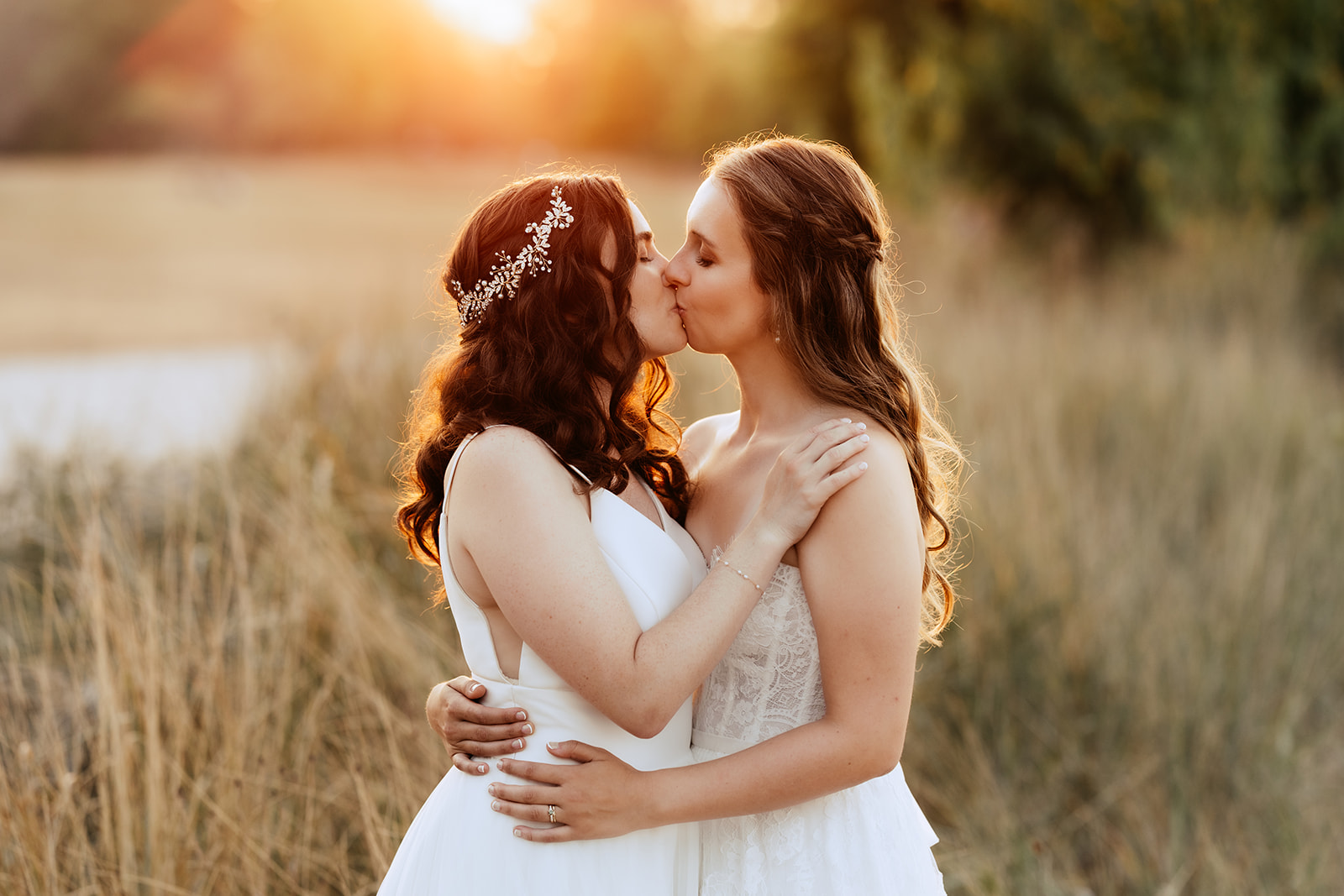 Kirsten and Madison hosted a wedding at Brock House, Canada, surrounded by her favorite people at sunset.

We have been together for about 3.5 years. We first met on Tinder, where Kirsten sent the first message, and Madison accidentally didn’t notice until six months later! The story goes that Madison was showing her Tinder profile to her nieces, and saw she had a message from Kirsten that she never replied to but didn’t know why.

After some encouragement from her nieces, she sent a very late response and luckily, Kirsten replied and was still interested!

Once we finally connected, we had our first date a few days later, on Jan 16 2019. It was a 6-hour date on a weeknight until 2am in the morning, and we didn’t want it to end. A month later we became girlfriends, a year later Kirsten moved in with Madison, and 3.5 years later we are married.

We both wanted to propose, but Kirsten wanted to go first. About a year before getting engaged, we went to the ring shop together to see what we liked. Then in May 2021, Kirsten proposed to Madison with a picnic on a dock by a lake near Prince George BC. It was supposed to be at the top of a mountain on a hike, but the hike was closed due to bears.

A week later, Madison proposed back on the beach behind her parents ‘house in White Rock BC (she’d had the ring and was just waiting for Kirsten to propose).

Why did you decide on Brock House as your wedding venue?

Since everyone was rebooking their 2020 weddings still from COVID, there weren’t a whole lot of venues available. I had seen Brock House before, since it’s right on the beach, and decided to book a viewing. It ended up being the only viewing we went to, the lawn was so pretty with a gorgeous view of the ocean and mountains. Exactly what we were looking for as we wanted a west coast themed wedding.

Did you pull together any DIY projects?

Yes, a few! Our venue wouldn’t allow us to throw anything (rice, flowers, etc.) so Madison came up with the idea to make ribbon wands for each guest to wave once we were pronounced. A great idea, but meant we had to make 130 ribbons wands. Luckily Madison’s mom, sister, and niece came to the rescue and the 4 of them were able to make them over the span of a couple hours.

We also made a custom seating chart based on a Pinterest post we saw. Instead of table numbers, we had table names for important cities and places we’d been to together. We wrote the table names on pieces of driftwood, and wrote the guests names on stones, then arranged them all on a bed of moss.

Finally, because we couldn’t have our flower girls throw petals, we gave them each a bubble gun that we decorated with fake flowers. They had a blast!

Tell us about the wedding day?

It was perfect, honestly! It went way better than we even thought.

We had been nervous leading up to the big day that guests would be unhappy with the later start time (6pm) as it meant dinner wasn’t until 8pm, and maybe everyone would be tired and leave early. But the opposite happened, and many people stayed quite late, with lots staying until the very end at 1am!

There was no drama, nothing that went wrong that we had to deal with, nothing awkward or cringey. It was all just perfect. The venue was absolutely amazing, and all our guests talked about the next day was how gorgeous it was. It was the most fun wedding either of us had ever been to, which is how it should be!

We did not. We had a secular ceremony that was pretty standard.

We wrote and recited our own vows, had our officiant read out three readings we had chosen, and exchanged rings. The only slightly unusual things we did were we signed the marriage license before the kiss, since we wanted the kiss to be the finale, and we incorporated a call and response with the audience. We had our officiant say, “Do you, their parents, families, and friends who have gathered for the couple today, grant them your love and acceptance, and give them your support for the marriage and new family they are creating?”, and the had the audience respond, “we do.”

One of our readings we selected for our ceremony summed it up nicely. Marriage is an acknowledgment of all the conversations that you’ve had leading up to that moment about the future. It’s you both saying, “remember all those things I said? Well, I meant it, every word.”