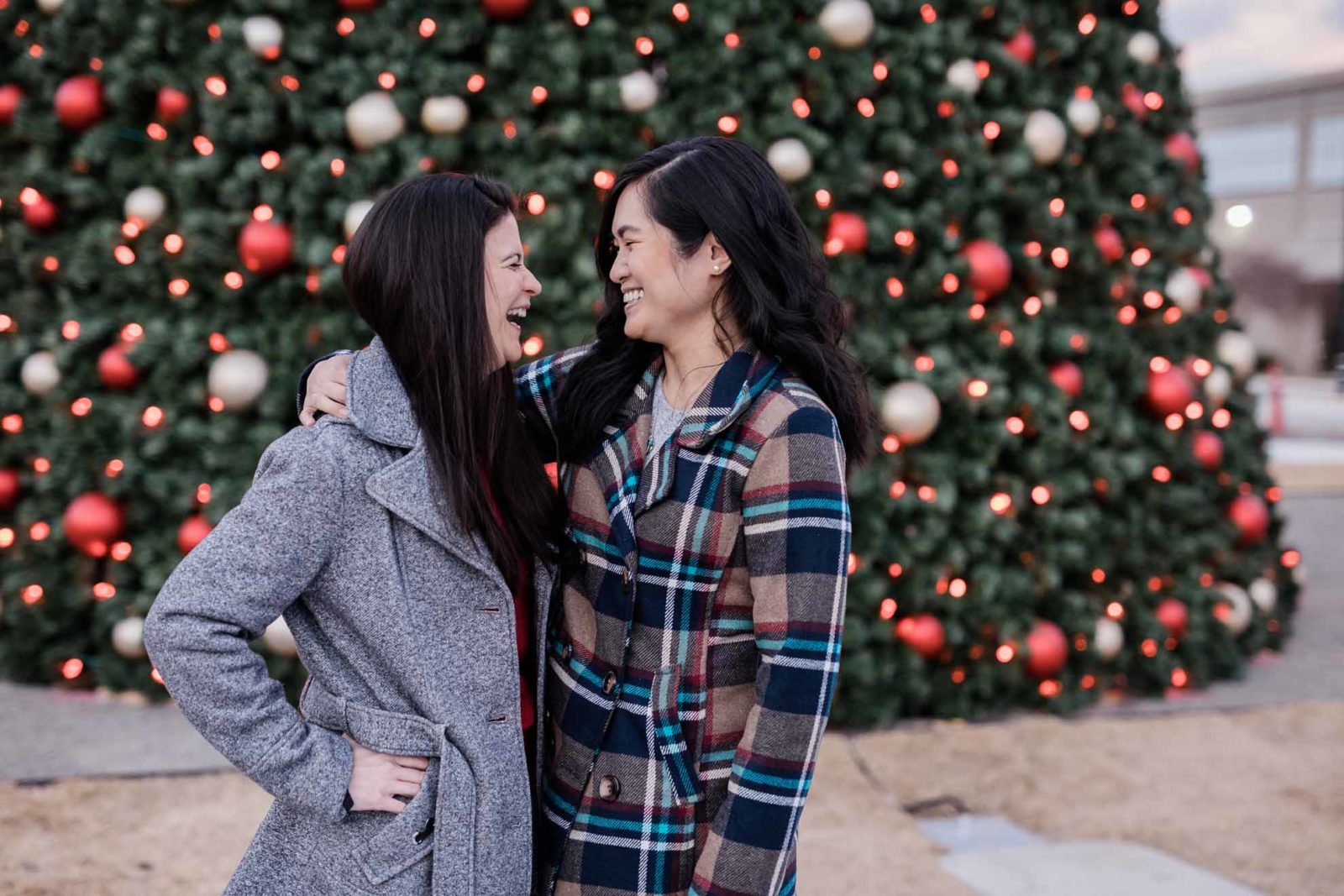 After ten years together, an engagement was a mutual decision. Kristina wanted to plan something special, and a public proposal by a Christmas tree ensued.

We have been together for almost ten years and met on a lesbian app called “El,” which is nonexistent now! We call it fate! It’s actually a funny story because my best gay guy friend created a profile for me, and her best gay guy friend created one for her. One day while at dinner, my friend and I were flipping through the app (he was doing most of the flipping) and found Susy three miles away, so he messaged her for me. I think Susy was reluctant because she was into blondes! But somehow, I won her over. We discovered that our friends ran in the same circles, so we felt safe meeting each other. We chatted and texted a good while before we met for dinner. And the rest is history.

This planning process we interrupted twice before the actual day! For Christmas 2019, I had planned a trip to New York, where we have both never been before. Susy LOVES everything Christmas. It just seemed right to ask her in front of the Big Rockefeller Center Christmas tree. However, she landed a job in a town one-hundred miles away from where we lived, so much of that month was spent commuting.

Later that next year, my family had planned a trip to Tuscany, Italy (we rarely have time to take trips together, so this was a big deal). Susy’s parents got invited along the way as well. This would be the perfect opportunity to propose in a romantic country surrounded by our families! However, things went pretty south in March when COVID started taking over. We decided to cancel our Italy plans which meant canceling the proposal as well.

After a discussion about having kids, this meant discussing getting married. In our state, for both of our names to be on the birth certificate, we would have to be married. Of course, we wanted to get married but had been taking our time, which was a good reason to keep us motivated. We just decided the safest and most practical thing for us was to have an engagement ring exchange with a photographer and do that around February. We came to that mutual agreement.

However, I had other plans! I wanted it to be special, with beautiful pictures and her gorgeous perfect ring and knew deep down that’s what she wanted and deserved. I also love surprising her. She had no clue this was already in the works and was convinced it wasn’t happening any time soon because I acted put off about buying a ring. I had to put my best acting skills forward.

Everything really flowed naturally. I purchased the ring first to give me that little bit of extra motivation! We have never taken professional pictures together and honestly don’t have very many pictures of just the both of us, so I planned to hire a photographer to “take Christmas pictures of us.” Arkansas is actually lovely, and there are many gorgeous places to propose as a backdrop. But Susy is into very clean, modern looks, and I wanted to add a little Christmas flair to that as well.

Argenta Plaza is a newly constructed plaza that sits in the center of the Argenta Arts District of North Little Rock, AR. This area has always been special to me: it’s very laid back and has a great vibe. It was about a two-week process of calls, emails, secrets, and excitement/stressing out! There is a huge lighted Christmas tree set up, a stage, waterfall features, and a modern lighted backdrop wall with rainbow reflective lighting- even better!

Alpha-lit was a company I saw on Instagram just a few weeks before the engagement. They rent lighted letters, and I thought it would be a beautiful added bonus placed on the center of the stage. I toyed with the idea of having a music performer such as a violinist or guitarist. Still, I ultimately asked the destination if they could play music in the plaza, and they did!

At first, they played a couple of Christmas songs, and we took some photos in front of the Christmas Tree. When “Better Together” by Jack Johnson played, it was Katie’s cue that I was proposing. I asked her if we could walk over to the stage and the lighted letters. It was around sunset, and the lighting was great. The weather was mild for December, and there were only three to four people on the plaza. Katie asked us to hold hands, and I looked at Susy and told her I loved her so much and whipped out the BLING from my pocket. She was shocked and surprised by her reaction, and I knew she had NO CLUE! The rest of the shoot was spent enjoying our time together while her favorite Christmas songs played in the plaza.

I had no clue what I was getting into, but it was THE BEST experience! Lauray’s The Diamond Center is a well-known small town, a high-quality family jeweler in Hot Springs, AR. I grew up hearing and seeing their advertisements. Since we had just moved to Hot Springs, I thought it would be the easiest place to go. I made an appointment, walked in, showed them a picture of what Susy wanted, and they made it happen. The whole experience took maybe two hours from selection to setting the diamond to finish. They gave me various ring boxes I could work with and even took some pretty pictures and airdropped them to me (that I kept in my hidden photo files ).

After ten years together, has the engagement changed anything?

This engagement has been the kickstart to our lives, and it is a “new beginning.” However, we have been a couple for almost ten years. All that time, we have been focused on developing our careers and supporting one another in the process. There have been very few times we have enjoyed each other and life without worrying about a test or project coming up. In addition to that, four years were spent being “roommates” due to Susy attending a very conservative school. It’s a sacrifice we made together and decided to stick to to be able to achieve her dreams. This engagement has made our love much stronger!

Susy has always wanted something to the effect of “outdoor with lots of twinkling lights,” and I’m a big outdoor person, so we are on the same page! We look to Instagram for everything, and Dancing With Her was my first go-to spot for dress/suit ideas. Sexy, feminine suits are so hard to find, and your IG was an excellent place for inspiration and links to other places.