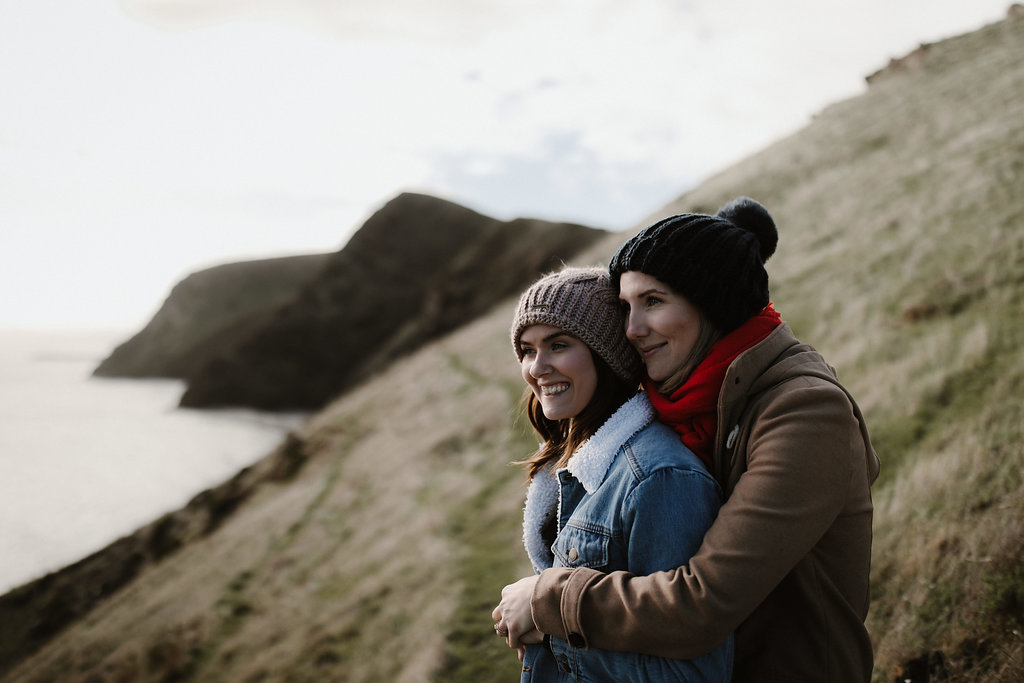 Lisa and I had known each other for around six years but just never quite managed to be in the same place at the same time. We went to university only one year apart, had many mutual friends, and worked as paramedics for the same company. I always thought she was lovely, and I knew she was gay and stunning (so I knew who she was)! But we didn’t meet properly until we went on a soccer trip together for the emergency services games in April 2014.

We were the only ambos on the police team, so we got paired up together when rooms were allocated. We started talking on the car ride from Adelaide to Melbourne and didn’t stop talking for seven days. Staying up until 4 am each night chatting and wondering why we couldn’t sleep. I think it was day two that I realized that I actively needed to stop staring at her, and by day six, I realized I was in big trouble. We were both in relationships, but that week showed me what kind of mental connection you could have with someone, and settling for less wouldn’t be fair to yourself or your partner.

I had known that I wasn’t entirely straight for quite a while but had only ever dated guys. I left the trip, thinking that I needed to make some significant changes in my life and meet someone with who I connected as much as I had with Lisa. In an ideal world, it would be Lisa, but she was taken, and I didn’t want to be tragically in love from afar. I got home and broke up with my boyfriend, and was scheduled to go to Europe with my family the following week for a month. While I was away doing some much-needed soul searching, I found out that Lisa had broken up with her girlfriend. We started talking again when I got back and have pretty much been inseparable ever since.

Fast forward four years, we have a house, a dog, a cat, and constant adventures. Life is pretty incredible.

However, the proposal was a disaster.

I am an awkward person and an over-thinker and not much of a big planner, etc. I went to a jeweler and started to design some rings after Lisa fell in love with a work colleague’s ring design. Grace sent me some pictures after working together, so I had the basic idea. The jeweler and I spent weeks getting every detail of Lisa’s ring perfect and went back and forth with emails going over every detail. At that time, I think I spent five minutes talking about what ring I liked. Thinking we would have more time to nut out the details, the jeweler said they were ready to be picked up! I was pretty shocked and but figured I would roll with it.

We were about to fly out to Bali for a friend’s wedding and holiday on Saturday, and the rings were ready on Thursday. So I said it’s a sign – you are meant to get engaged in Bali.

We got to Bali, and I was an absolute nervous wreck. I always thought she would say ‘yes,’ but didn’t have anything planned because it was sudden. The ring boxes were huge and lit up when you opened them [a bit OTT but still cool, so I didn’t want to take the rings out], and to top it all off, we were sharing luggage. I was sure she would find them. All in all, it was a pretty tough time.

Lisa and I are foodies, so I made excuses to search for a fantastic restaurant that would be perfect. It was actually tough to book for the occasion because we only had two-three days in each area. Lisa wanted to help find every place to eat, and booking in another language was difficult. I was also acutely aware of the cultural differences of being in a predominantly Muslim country where not only was homosexuality culturally uncommon and illegal under Sharia law.

We settled on a nice restaurant for dinner the first night, and I thought I would work the proposal out later. We got there, and it was magical. Picture a restaurant floating in the jungle. It was raining, so no one could sit out in the floating part. This meant that when we finished dinner, we could just go down the end and be surrounded by beautiful lights and jungle. It was just so lovely and intimate I thought once again that it was fate and so I proposed, even though I didn’t have the rings on me.

I don’t even remember what I said, but I remember saying it was beautiful and that it would be an excellent place to get engaged – because I am super corny.

We raced home to get them, getting completely lost along the way. We finally got back and sat out by the pool in our villa. She said yes.

It was a bit of a disaster, but definitely’ me.’