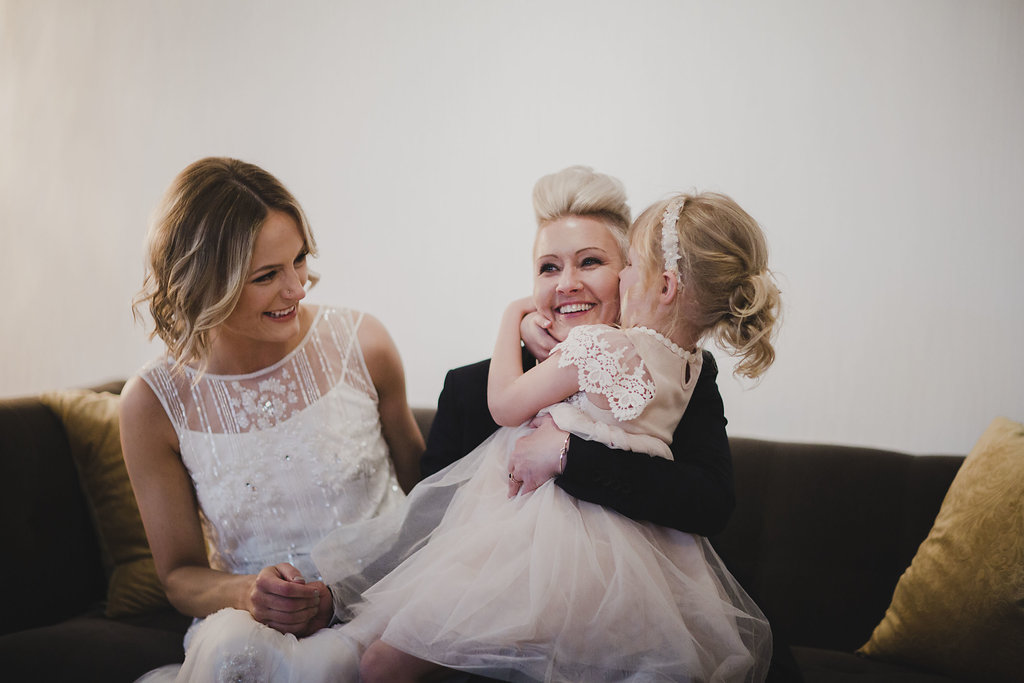 We have been together for three years. During Pride Week in our town, we met as I was slowly coming out to friends and family. I was out celebrating with my best friend, and she spotted Melissa (who she knew through mutual friends) and said that she needed to introduce us immediately. We moved in that winter and were engaged within the year!

Melissa and I were in Grand Marais, Minnesota. A small, beautiful town in Northern Minnesota, forty-five minutes from the U.S. border which crosses Ontario/Minnesota. We knew we would be staying for the night and had spent a beautiful day walking around. Window shopping, eating, drinking, and taking in the view of Lake Superior. We decided to stop for dinner at a restaurant with a patio, just before the sun was going to set. Walking in holding hands, we asked for a table for two on the nearly empty patio space. What followed was a cold, disapproving look from a restaurant staff member as she informed us that they did not have room for us.

We both silently took in that the restaurant’s inside was even more empty than the patio was, and, feeling slightly humiliated, we told them we would find somewhere else to eat.

We walked down the boardwalk and stopped to vent about how shocking and embarrassing it was to be treated that way. Something we had never experience where we are from. I made some jokes to lighten the mood, and as we looked out at the setting sun over the lake, we decided not to let it ruin our evening.

As someone who hates missing an opportunity to prove as loudly as possible that love is more significant than anything. I pulled a ring box out of my purse that I had taken along ‘just in case.’ I asked Melissa to sit on a nearby bench with me and, after spotting the ring, she repeatedly told me to stop because SHE had a ring that she wanted to give to me, first. I knew that everyone we were close to, including Melissa, expected her to be the one to propose – and I wanted her to know that she deserved the moment just as much as I did.

Once she stopped saying no, she finally said yes – and it was the best moment of my life. When we got home the next day, she hurried me into our bedroom, got down on one knee, and gave me a ring she had been trying to save for the perfect moment. We later found out that our custom-made rings had been delivered on the exact same day!

My sister-in-law and bridesmaid, Caroline, married my brother a couple of years ago. She was able to find the perfect dress on a second-hand website. I had a Pinterest board of ideas, and the vision of what I wanted was pretty clear and quite specific. Knowing that it was a style that I likely wouldn’t be able to afford brand new. I took to the used sites and was able to find the very dress I had in mind, by BHLDN – who was my top favorite! The measurements were mine, exactly, and it couldn’t have fit more perfectly.

Melissa knew she wanted to wear a suit. She struggled between whether she wanted it white, blue, or black, or maroon, so on, and so forth. It is tough to find an affordable, well-tailored suit in a women’s size (and Melissa is very petite, at 5’2), so she knew she wanted to try them on and not order online. She toyed around with the idea of going shopping with a friend but ultimately decided that she wanted me to be the one to help her choose the perfect outfit. It ended up being much easier than we anticipated! She found a blue suit that fit her like a glove, and it was on sale. She wore heels and killed it in her suit – she left her bowtie as my surprise – maroon with white flamingos.

We didn’t have a theme, but we knew that we wanted everything to be simple. Our reasoning behind this was so that there was as little stress as possible involved leading up to and on the wedding day. Getting married at The Chanterelle played a considerable part in this being possible. The space itself is so beautiful on its own.

My aunt made up greenery table runners, and my sister-in-law made up a bouquet of peonies for myself and my daughter. We had a few gold and glass decorative items (sconces and candles), which accented the gold chairs that the venue uses beautifully. Aside from that, we just wanted the day to be about our love, and not about anything fancy – it was perfect.

My aunt and sister in law did a LOT of DIY projects, mainly small items. The runners, the bouquets, name cards, and invitations. Melissa and I tested our artistic talents one evening. After a few test runs, successfully stained and stenciled the table numbers on blocks of wood!

During the week leading up to the wedding, our daughter and I got the stomach flu back to back.

Sure enough, the rehearsal morning, Melissa woke up feeling terrible and could barely get out of bed. She was too sick to be upset, but I was devastated.

The morning of the wedding, my Mom called and said she had caught the stomach bug. I was almost ready to call it off. Melissa insisted on the morning of that she was feeling nearly 100% better, and it calmed me down enough to enjoy the day.

Aside from my Mom feeling crumby, our day was perfect. We danced until well past midnight, we enjoyed fantastic food and drinks, and were both feeling fantastic – or so I thought.

The morning after our wedding day, Melissa woke up and told me that she had actually spent the day making frequent trips to the bathroom to be sick. Having her bridesmaids stand guard so that I wouldn’t catch on.

Looking back, neither of us can believe that she was able to make it through the ceremony, meal, and dancing (and tequila shots!) without falling to the floor from exhaustion!

The family plague was definitely the only thing that was not according to plan.

The entire day was a dream. It is hard to pinpoint a specific moment as “the best.” Watching the joy on my elderly grandparents’ faces was one of them. I made a surprise video of footage and photos of Melissa and Mia, our daughter, together. And played it after speeches wrapped up – they loved it, and watching their faces is something I’ll never forget.

I had been waiting since the day I met Melissa for the moment that I could call myself her wife. So I suppose that when we were finally pronounced married and kissed each other as “You Are the Best Thing” by Ray LaMontagne filled the room. Might top the list of favorite moments.

To us, marriage means, first and foremost, commitment and trust. It is a promise that we do not take lightly. We definitely have our share of disagreements, and relationships (married or not), can be tricky. It is essential for us to know that we have each other even in the tough times and that neither of us are going anywhere.

It means listening and learning – evolving together and forgiving shortcomings. At the time of writing this, we have been married for nine months almost to the day.

Our first year of marriage has come with many unexpected hardships, and sometimes it has been testing. At the end of the day, though, Melissa makes me a better person, and she makes me want to be even better the next day.

Marriage is remembering the love that exists even in the most challenging times. It also means laughter – at ourselves and each other. We hope to keep having fun with each other and not letting that get away from us.

We are lucky to have found each other.

Cara & Erika – A Story of Soulmates

Mae & Stella – A Boho Elopement in the Sedona Desert

Cole & Kaila – A Unique Engagment Shoot in the Forest