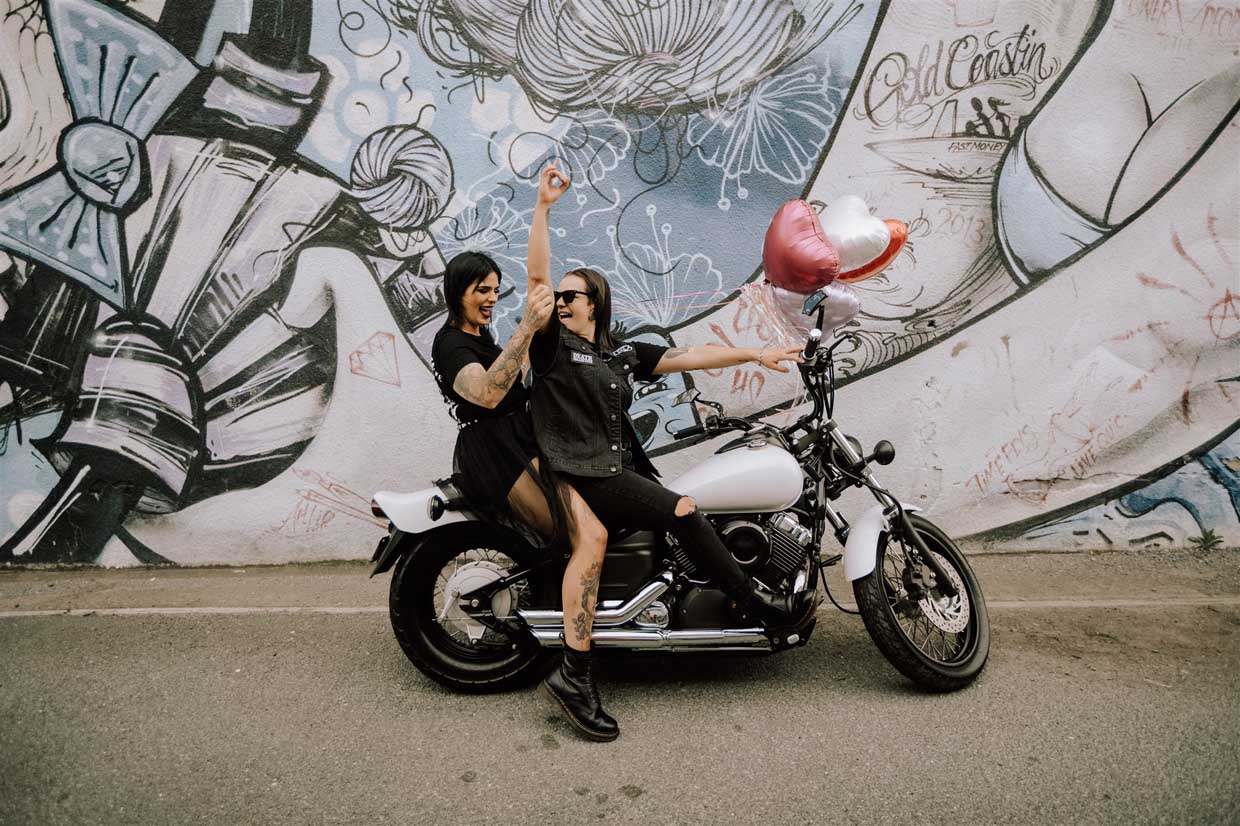 Paige and Paxton’s connection was instant, but for Paige it meant coming out after a eleven-year marriage with a man. After a year together, Paige proposed during what Paxton thought was ‘just a couples’ photoshoot.

Paige- We had talked back and forth over when the day happened who would be the one to drop the knee. Paxton always said it would be her, but I knew I wanted to surprise her and be the one to propose. During the peak of Covid last year, we were stuck apart for three months in different states. We had planned a cute content shoot with Michelle from The Wild Hitcher and Dani from Untamed Creative. Michelle and I were talking and decided we should make it a surprise proposal. We set a shoot date, and I ordered her ring from the amazing Windfall Jewelry in Melbourne.

Paxton set a hopeful return home date, and I got a message from Michelle saying she’s coming home, let’s shoot next week and I realized holy shit, okay, the ring isn’t ready. So the day before the shoot, I had to rush around and find a temporary ring as hers was still a month away! But in the end, it all came together better than I ever could have imagined.

We pulled it off as Paxton obviously thought the whole time it was just a cute couples content shoot!

Tell us about that unique custom engagement ring!

We obviously had the temporary ring just for the day, but Paxton’s actual engagement ring is from Windfall Jewelry. Her ring has a unique skull engraving on the inside of the band which means Momento Mori, which means death is inevitable, so always remember to live!

It means so much. It symbolizes that we truly want to spend forever together. One of the best parts about being engaged is that we can be in the ultimate honeymoon period, even though it’s, you know, well before the actual honeymoon. So you’ve got this amazing bubble where you’ve made a massive commitment to each other and are on cloud nine. It’s a fantastic feeling!

Wedding planning is amazing, and we get married this October! Our wedding is us, authentically us. That’s what matters most for us is every single detail being about who we are, which is far from traditional and we cannot wait.

Paige- I think it’s special to mention that I have been previously married. In which I hid my true sexuality for many, many years, which turns out can truly affect you in many ways. I lived a lie to myself for so long, trying to convince myself that I was living the life you are supposed to. So when my marriage ended, I was so lost I didn’t know who I was or what I wanted.

But the day I met Paxton was the day my life truly changed which sounds so cliche, but it did! I knew when meeting her who I was and what I wanted in life. It made sense. My life flipped on its head, and I was a 30-year-old mum of two who had left an eleven-year relationship to come out as gay finally. And that was huge, but I genuinely have Paxton to thank for it. She made me realize my worth and live my life the way I want to.

Dancing With Her Recommended Vendor
Planner The Wild Hitcher

You’ll find Michelle in our online directory of inclusive wedding vendors from around the world.

Caity & Melissa – Coming Out Together

Coming Out After Marriage to a Man, & a First Date with a Woman