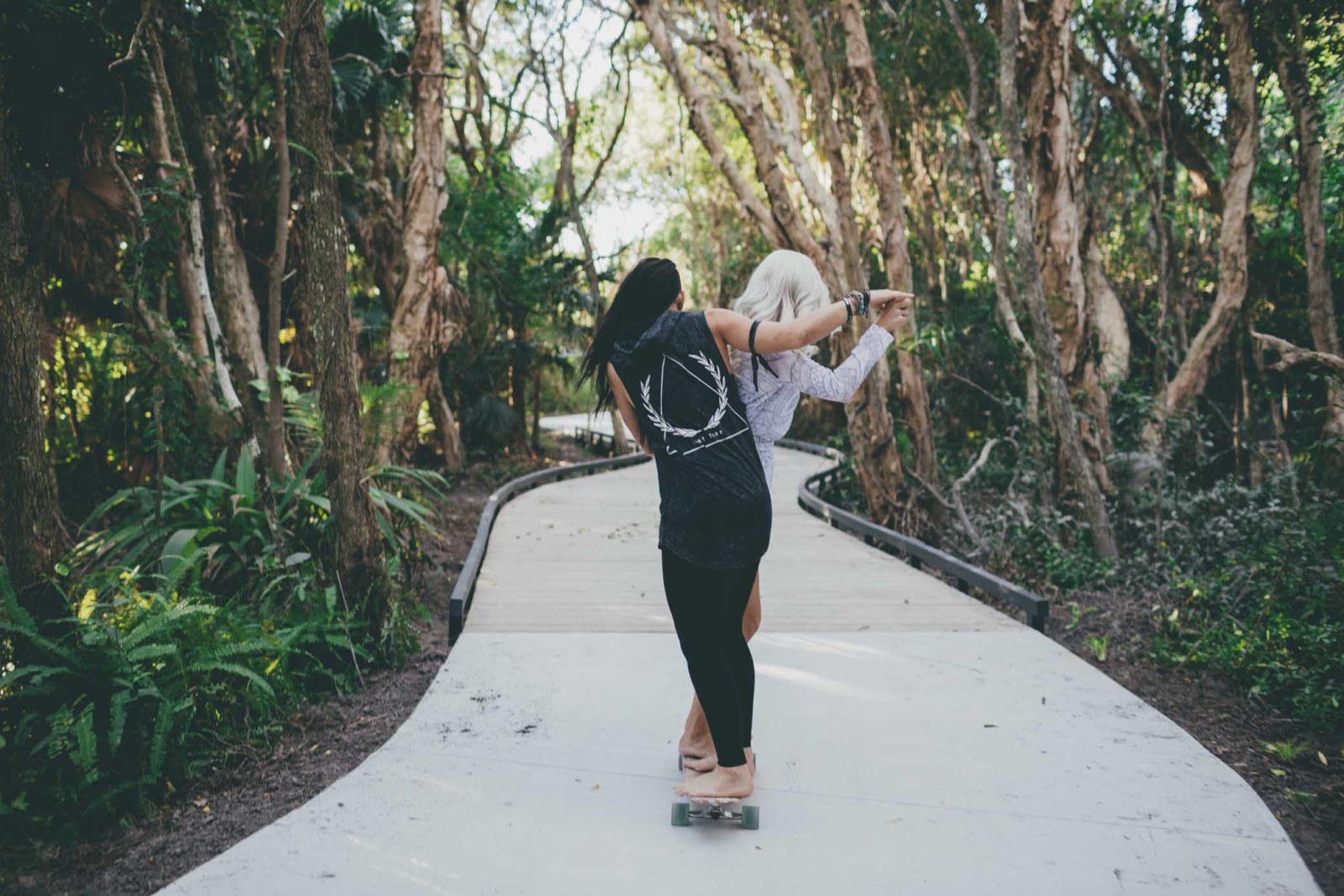 Adventurous couple, Petra and Shari knew they were heading down to the beach for a few photographs to help expand photographer Talitha Crawford‘s portfolio. Petra didn’t know that Shari was planning to ask her, ‘will you marry me?’ in a surprise proposal. We sat down with them and asked them all the juicy details.

Who are Petra & Shari?

P & S: Shari is a high school teacher and Petra is a critical care registered nurse. Petra grew up in Brisbane, and Shari grew up on the Sunshine Coast. Shari is passionate about her skateboarding business and coaches children in her spare time. Petra is currently studying towards her post-graduate certificate in Critical Care.

In the very beginning, Shari taught Petra how to surf, and we would often have ‘surf dates’ at all the different beaches along the Sunshine Coast. Now we both surf together at our local beach right at our doorstep.

Obviously, our most favourite memory together was when Shari proposed at the end of this photoshoot! The feeling was so overwhelming and the best highlight in both of our lives. Some of the best memories we have together are through travelling. Our faves include the crystal clear waters on the Mexico coastline along the Caribbean Sea, snowboarding and skiing down mountains in New Zealand, exploring the Great Barrier Reef, and getting lost in New York.

How did you meet? What were those first six months like together?

P & S: We met properly through a mutual friend, fell hopelessly in love, and Petra packed up and moved to the Sunshine Coast. The rest is history. The first six months were fantastic and fun, but we always say to each other we didn’t think it was possible to love each other more and more every day, but we seem to.

Talk us through planning the proposal. Did the other have any idea what was happening?

S: I planned the proposal without Petra knowing. Petra is super organised, observant and attentive to detail, so as you can imagine, this was the most challenging thing I have ever had to keep secret. Talitha (the photographer) had approached Petra to organise a same-sex couple shoot for her portfolio to broaden her market. I decided to contact Talitha without Petra knowing and asked if it would be ok if I proposed at the end of the shoot. Talitha was stoked on the idea and promised to keep it all hush-hush.

I knew the shoot would be ‘a day in the life of’, so I needed something that tied each location in with the proposal. I decided on a chalkboard that we took in turns to write something cute and meaningful on. The last stop was my turn, and I wrote, “The Proposal.” Petra had no idea what sign she was posing with said!

So, without Petra having the slightest idea, Talitha and I planned the perfect proposal at the end of our photoshoot, with the whole afternoon and big moment being caught on camera – an absolute surprise.

P: Amazing for me! Like a fairytale, all captured in photographs. I am so grateful I can relive that moment time and time again. It happened more perfectly than I could have imagined. She proposed at Point Cartwright on the Sunshine Coast, so we get to re-visit there all the time and reminisce.

S: Nerve-wracking – although I never get nervous. I just wanted it to be perfect and there was so much out of my control, so it was hard not to be nervous! I was stoked once she said yes, and it felt awesome to be able to surprise Petra. She hates surprises and usually knows exactly what is going on.

It was a sense of relief to no longer keep a secret from Petra anymore. We tell each other everything usually!

It sounds magical! What’s planned for the big wedding day?

P & S: Wedding planning has been fun! We have just sent out all of our save the dates, so it’s all starting to come together. And we are getting married in Byron Bay with one hundred of our nearest and dearest celebrating our wedding.

We never thought that the recent changes in the marriage law would affect us as much, but it does. We sat and cried tears of happiness the day it was announced. All we could think of was that we would be legally classified as wife and wife, and that feels amazing!