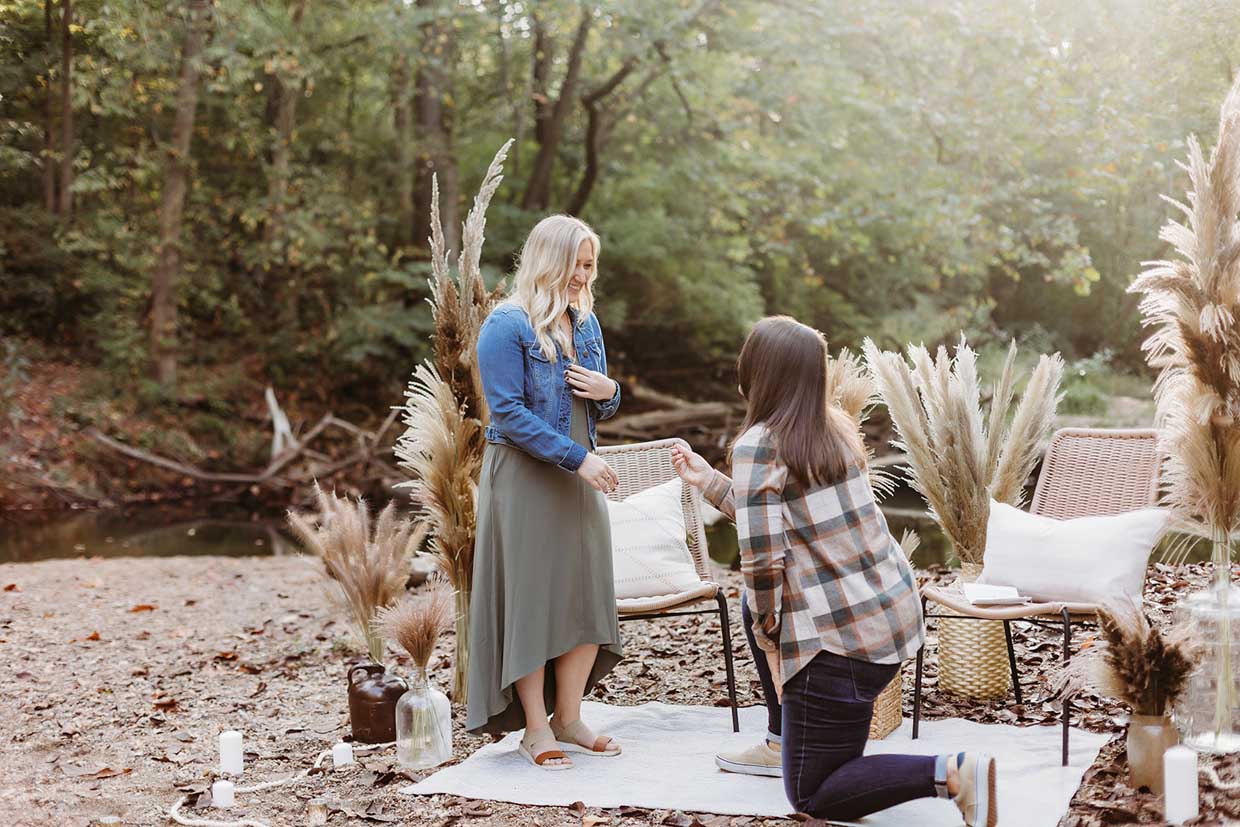 Among the mountains of West Lafayette, Kendra planned the perfect (elaborate) surprise proposal to her future wife, Alex.

To understand why the proposal was so successful, you first need to understand the back story.

We have a 13-year-old Yorkie named Eli, and it’s apparent that he’s getting old and isn’t 100% all the time.

In the spring, Alex had the idea to surprise me with family photos with Eli. She reached out to Sam (Samantha Mitchell Photography) for a quote/availability. Since I constantly fill our calendar, she let me know of the surprise ahead of time; but ultimately, we decided that our schedule was too busy at the time and it was kind of forgotten about.

In July, I had started to brainstorm ideas of how I could propose to Alex. We had an upcoming trip to Italy in October, and I thought that could be the perfect place to do it; however, from previous conversations, I knew that Alex had one requirement for a proposal – a photographer. So, I began reaching out on Instagram to many photographers in Italy, asking if they were LGBTQ+ friendly.

Unfortunately, many of them had no idea what I meant by that initially or from their responses. I didn’t feel 100% comfortable. So, I scratched Italy as an option.

I ultimately ended up sending Sam a DM on Instagram, as Alex had already reached out to her earlier that year, and I was super impressed by the wedding photos she took of our good friends. Sam was instantly game for shooting the proposal and went above and beyond in helping me generate ideas. After months of brainstorming (and even considering bringing her to Italy with us), Sam suggested doing an Instagram giveaway, where she would give away a photoshoot. Instantly, a light bulb went off, and I was like, this is it. Alex will win, I’ll suggest using it to take family photos with Eli, and she won’t suspect a thing. Sam and I did some planning around the timing of the giveaway, and then she launched it.

We were hanging out at my mom’s house that night, and Alex was scrolling Instagram and noticed the giveaway. And she not only noticed it, but she was also in it to win it. She began tagging everyone she knew, had me tag people, and even convinced my mom to tag people on her behalf. She continued to do this over the course of the week or so when it was up.

When Sam posted that the winner would be chosen in a few hours, Alex called me and said tag as many people as possible. I told her I didn’t have anyone else to tag, and she replied with, “then tag some celebrities” (sorry to Fletcher, Britney, Drake & Biebs). Sam let me know what time the giveaway was ending that night. So I took Alex out to dinner and secretly recorded her reaction to winning. She couldn’t believe it because she said she never wins anything (little did she know she did not win this either).

For about a month and a half after, Sam, Andrea (Andrea P Events), and I worked together in secret to plan out the date, time, location, proposal setup, and how the proposal/photoshoot would go down. We had everything planned until the final minutes when they emailed me a picture of the design and told me where to stand for photos.

The proposal ended up being the day before we swiped right on each other and also lived up to the date – 10/10 (October 10th). On the morning of the proposal, Alex suggested that we stop at Starbucks to reminisce on our first date (which made my heart melt – because how perfect).

I was extremely nervous that morning, noticeably so. Alex asked what was wrong, and I just said I was nervous about the photos and all of the weird things photographers make you do. She laughed it off and said it’ll be fine. So we showed up, took a few pictures with Eli, and then walked down to the most beautiful setup – a boho picnic. I read Alex a letter I wrote, popped the question, she said yes, and we had a fun family photoshoot as an engaged couple. It honestly couldn’t have gone more perfectly.

Alex and I began looking at rings in April of 2021 while she was working in Ann Arbor, Michigan. We popped in a few places for fun, tried things on, and got ideas. I knew exactly what she wanted from those visits. I had a few friends who had worked with Sydney from Pacula Diamonds. A very talented boutique jeweler in my hometown (Fort Wayne, Indiana), so I made an appointment in July of 2021. We looked at various diamonds and customized them to be everything Alex would want and more. (So much so, she said, “holy sh*t, babe,” when I was down on one knee – the perfect reaction). I didn’t know what I wanted initially, but Alex and I met with Sydney again after the proposal, and she created me a beautiful ring.

Kendra- Being engaged to me is the ultimate commitment and marks the start of a lifelong partnership with one another. It’s exciting that I get to experience life – both ups and downs – with my best friend by my side. I wouldn’t say that anything has changed in our relationship since the engagement. We’ve always been committed and supportive of one another. However, with a ring on, it’s definitely been more of a symbolic representation/reminder of that commitment to one another (and I love seeing Alex’s ring on!).

Alex- I was over the moon when Kendra proposed. It took me a whole week (maybe longer) to process the fact that I was now engaged to the love of my life. Engagement is a huge step in a relationship. We’ve now entered a new phase of our relationship. Where we are no longer just thinking about ourselves but choosing each other. Instead, we’re thinking of our future and building towards it more intently now that we’re engaged. I’m looking forward to enjoying this time, as it’s just as important of a chapter as marriage.

Dark and Moody Wedding in a Bristol Church