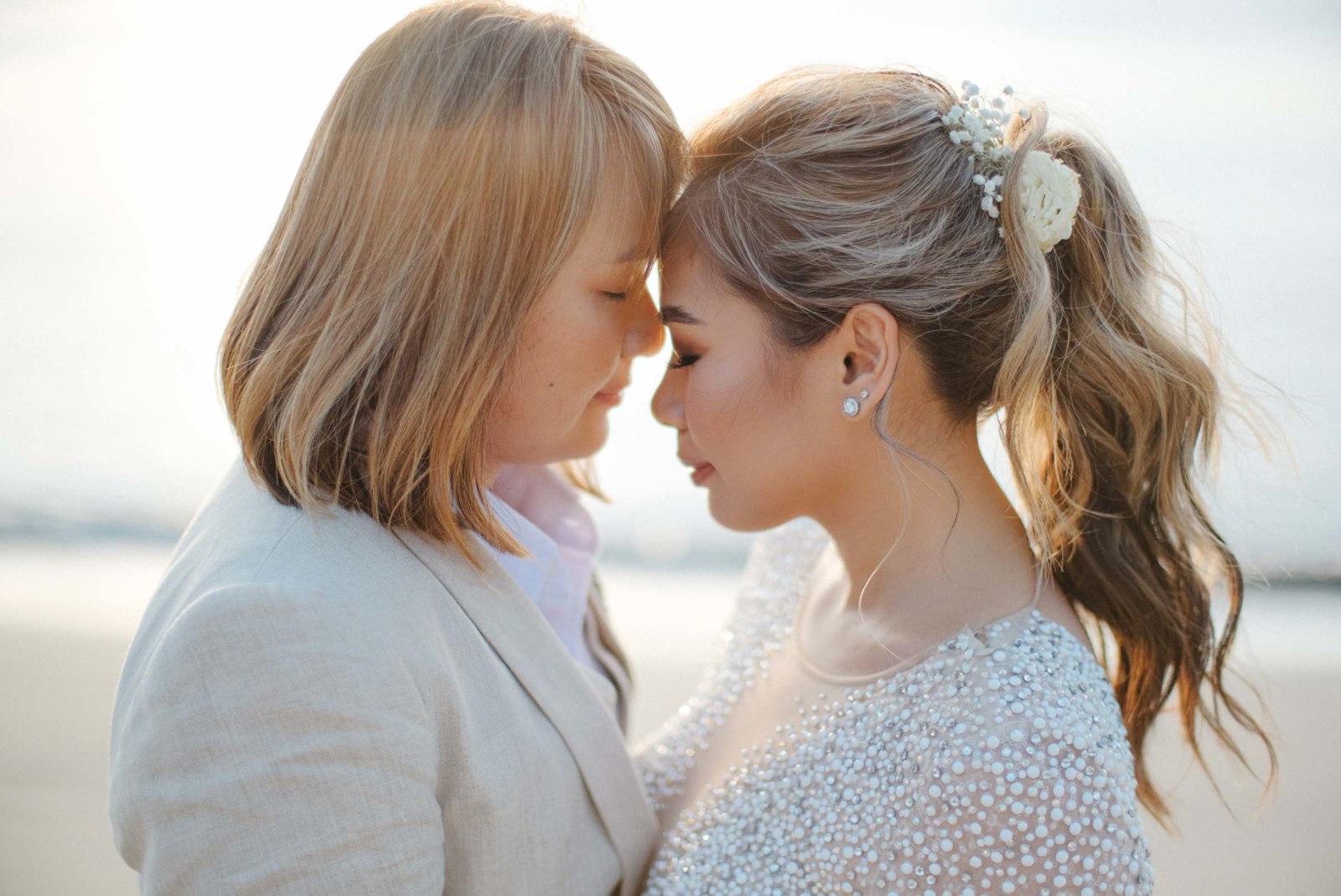 How did you both meet?

M: We’ve been together for almost six years now. I first saw Cheen in a Facebook photo posted by a common friend back in February 2012. I live in Alaska, and Cheen was still in The Philippines at that time. Our common friend showed me a picture of her friends in the Philippines, and there’s this beautiful girl who stood out among everyone in the photo. That was Cheen. Right at that moment, I knew I had a crush on her, she had a girlfriend at that time, and I had one too.

Fast forward to March 26, 2014, our friend arranged a dinner party with her college friends, and she also invited me. That’s when I first met Cheen in person. It was just a quick “hello” encounter. After that night, I sent her a friend request on Facebook, which she accepted. I never had the guts to message her after she had accepted my friend request because I was too shy.

Then July 31, 2014, came, we were both single, so I gathered up enough courage to send her a message. I was so nervous because I was scared I might get rejected. Luckily she replied, and we talked for hours. After that night, we never stopped talking. I also started sending her flowers, cakes, food, etc. on random days of the week via online delivery services to surprise her and send her things since we are thousands of miles away. I had waited for so long to get a chance like this, so I never wasted time.

On August 8, 2014, I booked a flight going to the Philippines to meet her. I told her I just wanted to know her more and see if we will work out. The next month we met again, which was no longer just a ‘hi and hello’ meeting. We became official- I was so happy! She was my dream girl, the person I’ve been looking, waiting, and praying for.

That is amazing that you both found each other, even though you both lived on different sides of the world! Tell us a little about the proposal.

M: Three months into the relationship, I was so sure of Cheen that I had already started planning for a surprise proposal. I organized with Cheen’s closest friends, and the plan was to pretend that we were having a late birthday celebration for her friend. When we got to the restaurant, everyone except Cheen knew what was going to happen. With a guitar and a shaky voice, I serenaded her in front of our closest friends. I popped the question, and she said YES! The fireworks display went off, and we went on to have an intimate dinner.

C: I wanted Myla to experience how it was to get proposed to too. We were fighting for “equality” after all, right? We’re already legally married at that time, but our big wedding ceremony hadn’t happened yet, so I decided to surprise her with a proposal and give her an engagement ring.

It happened during our vacation in The Philippines back in June 2018. We were on an out-of-town trip with our friends, and I had asked help from our friends to set up and decorate a room where we were staying. During our first night, we were drinking and playing “truth or dare” Then, when it was my turn to choose, I picked “dare.” A friend pretended to dare me to do something I have not yet done before. So I teasingly grabbed Myla’s hand, asked her to close her eyes, and led her to the room where I was going to propose. Myla probably thought I was going to do something crazy to her. Then there it was, there were balloons on the floor and small string lights wrapped around block letters that read, “Will you marry me AGAIN?” She said yes, of course.

You both looked stunning. Talk to us about your experience finding the perfect outfits.

C: Our designer, Manny Halasan, is very talented. We just told him we wanted our outfits to be unique, showing him some ideas we had in mind. He did not disappoint! Myla wanted to wear a suit, and I opted for a dress. He made sure our outfits would go well with each other, putting some charms on the back of my dress to match some charms he put on the front part of Myla’s suit. I almost cried when I saw my dress, it was the most beautiful dress I’ve seen in my life, even better than the idea I initially had in mind. Myla’s suit was gorgeous as well, and she looked very sleek and dapper in it.

We can sum it up in three words, BEST DAY EVER!

C: Gosh, it’s hard to pick a specific moment because I loved everything that happened that day! But okay, the best one was when the door opened, and it was time for me to walk down the aisle. The first thing I did was look for Myla, and there she was waiting for me on the other end of the aisle. She waved at me, and I smiled back, trying to hold back my tears, feeling nervous and happy at the same time. Just catching a glimpse of Myla made my nerves calm down a little bit. I felt so grateful because right there was the dream wedding I’ve dreamt about since I was a little girl. It was even more special because I get to experience it with Myla.

C & M: A few weeks leading up to the wedding, a volcano located in the same province where we held the wedding erupted. We were anxious about everyone’s safety and even tried to consider either postponing the wedding or moving it somewhere safer. Luckily, the volcano calmed down, so we were able to continue with the wedding.

It is very saddening that COVID-19 cases were starting to worsen at that time. Some of our guests from overseas needed to re-route their flights as some of the airports have already imposed travel bans. We both feel blessed and fortunate that our wedding day fell right in the middle of Taal volcano eruption and COVID19.

Do you have a stand out vendor?

C & M: LGBTQ marriage is not very common in The Philippines, and we’ve heard sad stories of our fellow friends in the community being rejected by a vendor because they’re LGBTQ. Fortunately, none of the suppliers we approached rejected us even if most of them hadn’t had experience handling same-sex marriages. We are very blessed to have gotten the chance to work with very passionate people for our dream wedding, but our photo and video team stood out among them. We are so in love with their style because they were able to bring out the rawest emotions in the photos and the film. Nothing was staged; everything was just so candidly beautiful.

Anything you are glad you did? Or wish you didn’t do?

C & M: We gave 100% of our trust in our suppliers. We also made sure we were open with their suggestions because they’d been involved in hundreds of weddings already, so their experience is valuable. We also wished we ate more during the wedding. Being both so overwhelmed we didn’t even have the opportunity to try the food served at the wedding. It was only when we got back to our hotel, we realized we were starving!

Lastly, what does marriage mean to you both?

M: It means always having someone to talk to, laugh with, cry with, be happy with, and work with. It means trusting, giving, and being willing to compromise and forgive.

C: Marriage means having to choose the same person above everything else, every day.