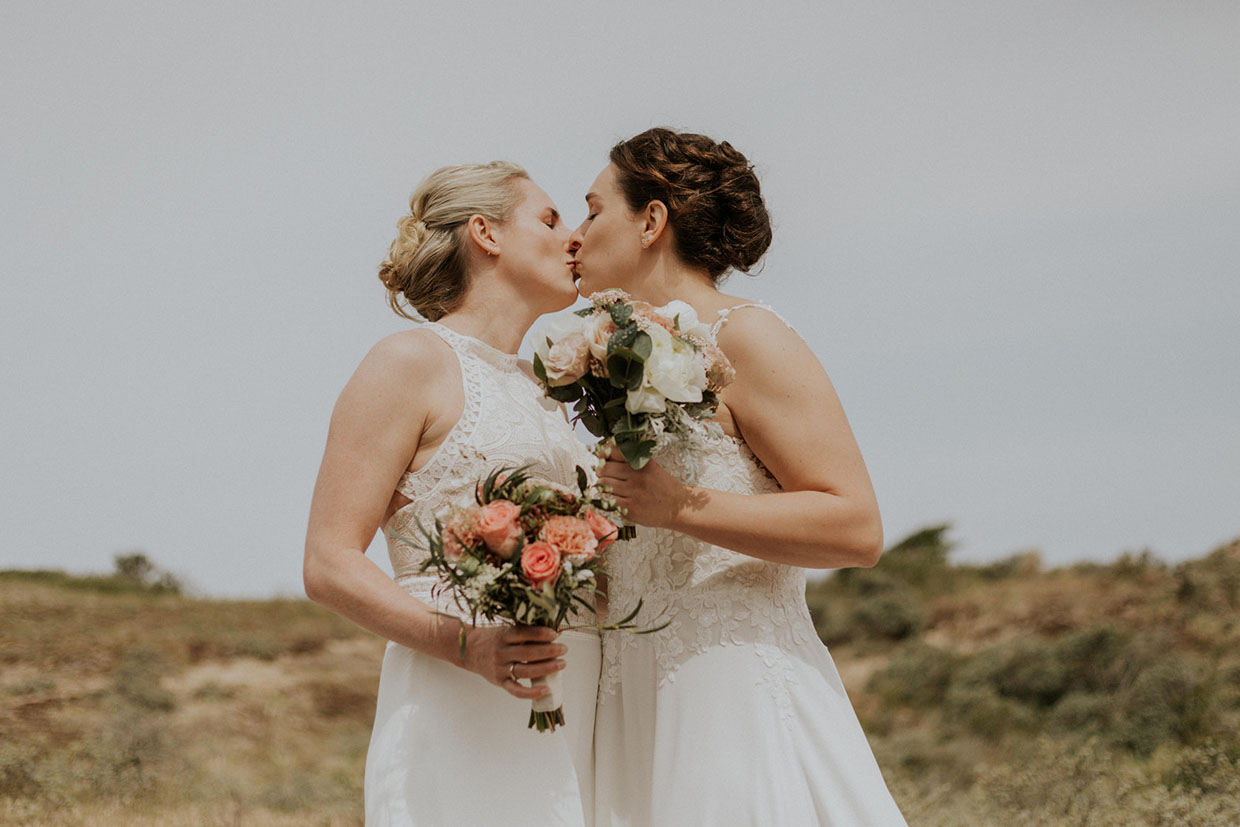 After meeting in the Royal Dutch Navy, Karlijn and Miriam married in an outdoor affair. They shared a first look in the Dutch Sand Dunes, a Navy chaplain led their ceremony, and they ended the night with food trucks.

We traveled for three weeks in Lapland, and our last stop was in the Lofoten islands in Norway. We went surfing there, in Unstad, with -30 degrees Celsius temperatures. Karlijn was really nervous the day before, but I thought she was just nervous because she doesn’t really like surfing. I told her we didn’t have to go if she didn’t want to. But she insisted. Karlijn left the water early and asked other surfers if they could take a picture. The surroundings were magical, but I just wanted a hot shower after I came out of the water. However, Karlijn wanted a ‘photoshoot.’ Reluctantly I said yes. Then she bent down on one knee, and I shouted an enthusiastic yes!

What led you to the venue?

The venue had organized a food truck festival a few years ago. That was the first time we saw the venue.

When we got engaged, we started thinking about what we would like for our day.

Sometimes in the Netherlands, people get married in one venue, have dinner in another, and have the party in another- on which you have to choose which guests can be present during a certain part of the day because of budgetary or practical reasons. We wanted to have the entire day in the same location, and we wanted all our guests there the whole day to not have to choose between them. Also, we liked the food truck festival atmosphere, so people could just relax in the sun and enjoy as much food and drinks as they felt like.

It was great to see each other privately in the dunes and nature, which we both love.

Then, after taking some wedding shots, we went to Miriam’s parent’s house to have lunch. Karlijn was already quite tired from the morning, so we decided to hang out there because the wedding started late in the afternoon. This was a great decision because we fueled back up and were ready to go for the rest of the day!

We drove to the venue, and our fathers walked us down the aisle. All our friends and family were already waiting there, and we could really sense a great atmosphere when walking in.

A Navy chaplain led the ceremony. We already knew he would do great since he also married our friends a few years ago. The ceremony only took 20 minutes, after which we cut the cake (in the Netherlands, you eat the cake before dinner for some reason) and toasted with everyone. A little while after, the food trucks opened, and in the evening, we went inside for a long night of dancing and more drinks.

Our favorite moments were the first look, finally getting to wear the dresses that have been hanging in the store for three years, and the ceremony where we could feel a fantastic, loving atmosphere.

Our love doesn’t change because of the wedding or the label of marriage. However, it means a great deal to us to be official partners.

Advice for other couples planning a wedding?

Stay close to your true selves while planning the wedding, and make sure you don’t feel like you are playing dress-up!

Courtney & NJ – A Rainy Day Wedding in a Barn