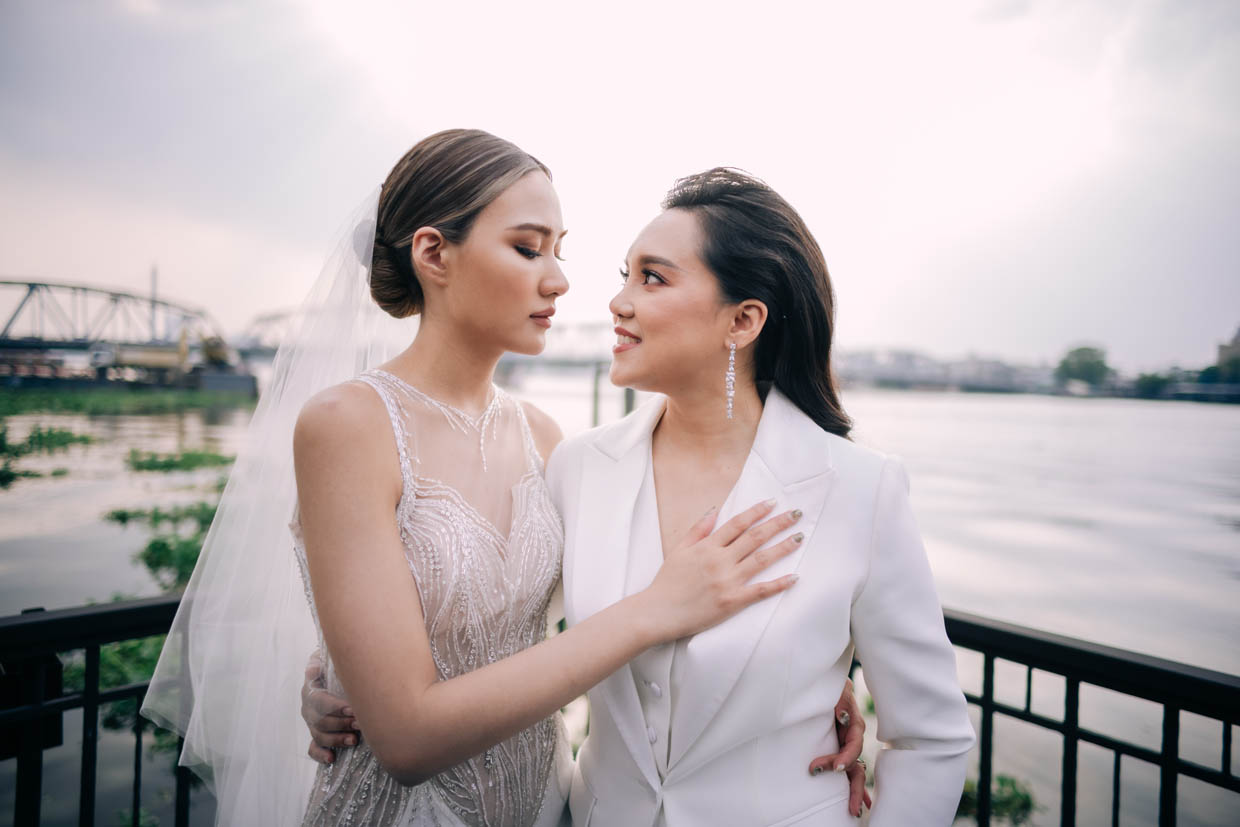 A Queer, Mediterranean-Inspired Wedding in Ibiza

Because it isn’t legal to marry as a same-sex couple in Thailand, Alex and Camillia married legally, online, in Utah, and symbolically in Thailand.

Nutta- I proposed to her after six months after we first met. I invited her to be a master of ceremony for my project, “Thai Film Festival in Malaysia.” After the event, I told her we would go take photos of the sunset in one of the nearby hotels. I set up the room with candles and balloons, and when she walked in, I played our song “Can’t help falling in love with you” and asked her to open many red boxes until she found the box with the ring, but when she opened it she found nothing. I then smiled and told her I would give her what was inside, but she needed to answer one question. Of course, I was on one knee and asked her to marry me, and she said yes right away.

Any stories from the lead-up to the wedding, stressful or funny?

We were stressed like any other couple. However, we wanted to push forward the law for equality of same-sex marriage in Thailand because now it is not legal for same-sex couples to get married, and we are denied all the rights. At the event, I invited top lawyers from all sectors to our wedding so they could see how we are all equals with the same human dignity. Many of them firmly promised to support our movement and would do anything they could to help.

It was really stressful! I needed to take care of everything even though we did have an organizer, but I couldn’t help being worried. Also, I was the first government agent to get married to a person of the same gender. So I had my worry about how people would react. However, the result went well, and all we got were smiles and well wishes. My girl was the most beautiful as always, especially when walking down the aisle. Everyone absorbed that beautiful moment. Our celebrant had proceeded with the ceremony perfectly. It ended with a song, and nothing could be better.

We are both Buddhist, but our moms are Christians, so we chose to do it the way we thought would suit our celebration. It also wouldn’t have been easy to do the ceremony in a Buddhist way.

It’s easy to fall in love but harder to stay in love. Especially when we are married, we must be a team supporting each other with love no matter what from now to forever.

A Queer, Mediterranean-Inspired Wedding in Ibiza