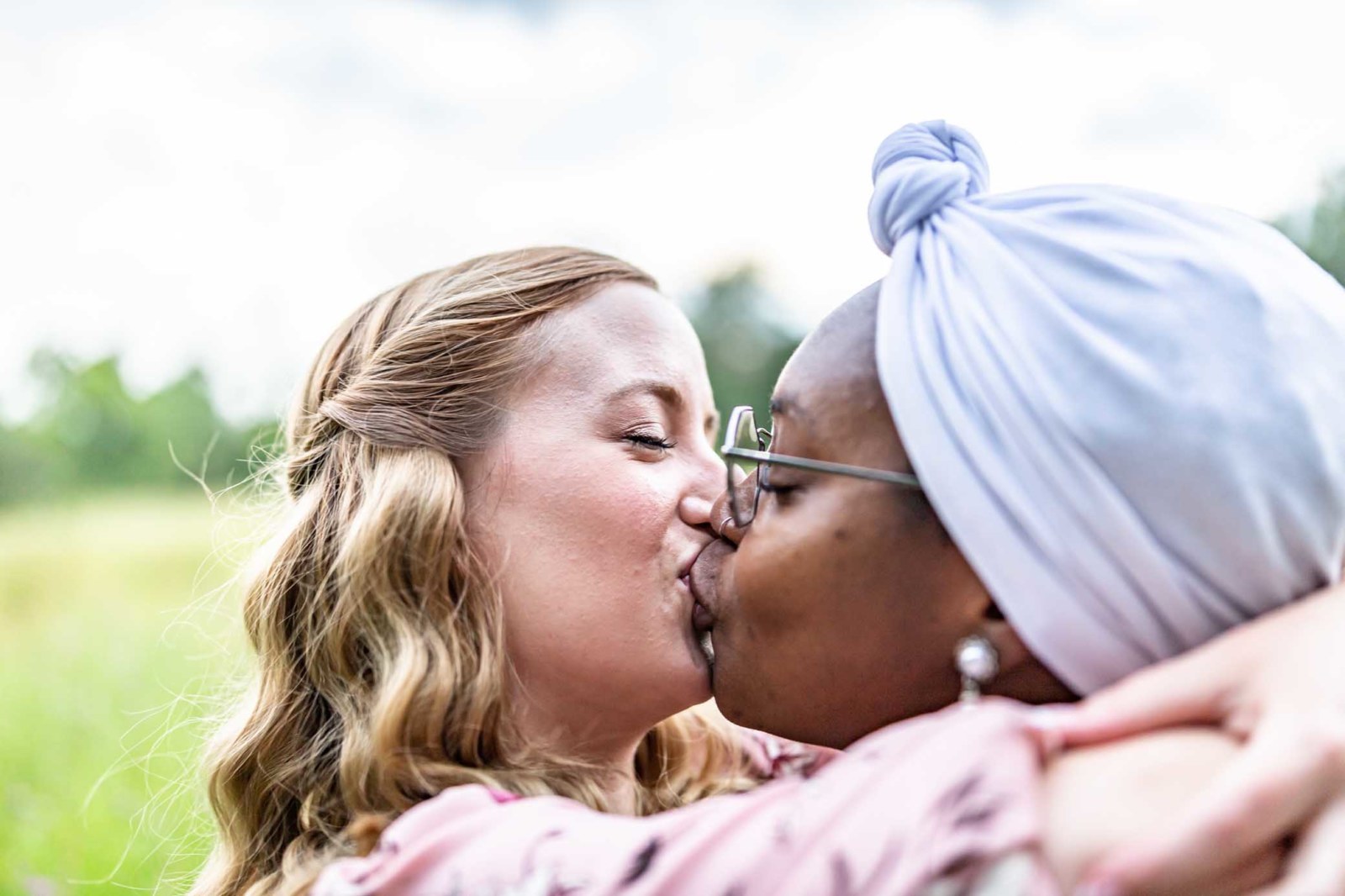 Alicia planned an epic Disney-themed proposal, however after losing a loved one decided last minute that life was far too short to wait another minute to propose.

Who are Alicia & September?

A: I am a social worker and parent educator and work with families in homeless shelters. I am also a writer and just finished my first lesbian romance novel- although it has yet to be published, and am already working on a second. Also, I am the co-founder of a Black Lives Matter Allies group, and I am an activist/organizer in my community. I love reading and doing anything outdoors, including hiking, kayaking, and going for long walks. I have been a vegan for almost four years and I was a vegetarian for twelve years before that.

September works at a fitness gym. She loves reading and knitting, both of which she does all of the time. She knits tons of baby items for friends and family, including blankets, hats, booties, and stuffed animals (when we have children, I cannot wait for her to make them homemade goodies).

Between the two of us, we have hundreds of books- seven bookshelves full. We often read the same books to discuss them, and before COVID, we were in a book club together. We enjoy watching movies together, walking our dogs together, and having picnics together. When I am lucky, I can get September to join me for a hike! She and I also enjoy going to plays and musicals, the movie theatre, and out to dinner. Date nights are essential for us. September also has a little brother who is eleven years old, and we help take care of him. We like to take him to do outdoor activities, especially trips to the beach and bike rides. September and I are both 25 years old.

Tell us more about your love story, and your engagement.

A: Our third dating anniversary is January 25, 2021. We met in September of 2017 at a Christmas party I hosted. September actually went to high school with my best friend, who I met in college. I didn’t grow up in the same area as them, as I came here for college and ended up getting a job right after, so I stayed in the area.

For years, September and I never met, even though we began to have multiple mutual friends. Finally, for that party, I was asked if September could be a guest. I was told nothing about her except that she was a lesbian (like me!). I am a huge feminist, but I am also the homemaker type, especially when I host parties.

When she first saw me, I was wearing a full out hoop dress and holding a homemade pie that I had baked. September had short hair in dreadlocks with the sides of her head shaved, a leather jacket, and long glass gauges in her ears. I remember thinking: this girl and I could not be any more different. Let’s just say we did not hit it off that night. She thought I was crazy as I ran around refilling drinks and chip bowls and making people take pictures and play charades (however, we now have a group shot of our friends and us on the day we met). I thought she was standoffish because of how quiet she was!

About a month later, my best friend and I went out dancing at an LGBTQIA club, and my friend suggested that we invite September. I thought the more the merrier! What I didn’t know is that September was already in bed and debated about not coming.

At the last minute, however, she decided to meet us at the club. I’ll never forget how she looked when she walked in, wearing a maroon crop top and sweatpants. She looked amazing, even in such a casual outfit. I was instantly attracted to her and danced with her most of the night. I finally told her that I was looking to meet someone, and when she asked what my type was, I made a point of describing her to a T. She didn’t recognize that I was flirting with her and told me she would keep a lookout for me and be my “wing-woman” (insert eye roll). We kept dancing.

The next morning, I woke up to a Facebook message telling me that she had fun with me, and she gave me her phone number. I texted her, and without wasting any time, I asked her on a date. We had our first date on January 25, 2018, which lasted a whopping eight hours because we could not stop talking. We went out again two nights later, and after that, we pretty much went on dates or hung out almost every day.

I didn’t know until months later that when my friend took her home that night that we hit it off at the club, September told her that I was not the type of girl you just dated, but the kind of girl you marry. Fast forward two years later, and we were engaged!

It sounds like, it was meant to be. And, the proposal?

A: When I went ring shopping, I knew exactly what I was looking for. My friend went with me, and we went to a bunch of stores. I knew what September wanted: a silver ring with a princess cut past, present, and future diamond setting (3 square diamonds). Finally, I saw this one at Zales that I liked. I held it and realized it was the ring and that I actually loved it. It took two weeks to get the ring back because they had to size it down to September’s size. Those two weeks felt like the longest of my life because I was so excited. I planned to propose to her on our second dating anniversary.

I had everything planned out. September loves Disney, and we planned to go to Disney on Ice on our anniversary for the second year in a row and then lunch after to celebrate. I ordered a specialized anniversary card with a scratch-off heart that read, “will you marry me?” And I also ordered a personalized Beauty and the Beast ring box and “I asked” and “I said yes” Disney themed shirts. I ordered a breakfast tray, and I planned to get her roses to put in a vase on the tray and propose to her over breakfast in bed. Afterward, I would present her with the shirts to wear to the show.

However, two weeks before that day, we went to a funeral. It was very sad but also uplifting. The whole time, the preacher kept talking about how short life was. I kept picturing the ring hidden away in my closet. And I realized life really could be short, and I couldn’t wait another minute. It may have been a little unorthodox, but it was truly an “in the moment” type of moment.

I made her breakfast for lunch (heart-shaped French toast, which is her favorite), I ran out and got yellow roses with a small anniversary card (since the other card hadn’t come in yet), and surprised her with everything by candlelight. I’m a hopeless romantic who does stuff like that often, so she had no suspicion at all. She actually didn’t realize I was doing a serious proposal until I got down on one knee and asked her again. She burst into tears, her hand flew to her mouth, and we held each other. When I pulled away, she said yes.

On July 13 of this year, September proposed to me six months and one day after I proposed to her. She and I designed my ring together, an ethical and timeless oval diamond set on a rose gold band from Brilliant Earth. It’s my dream ring and everything I ever wanted! I knew when she ordered the ring, So I kept waiting patiently for my proposal. September wanted me to be surprised, so she took her sweet time asking me to marry her. I do not have that kind of patience, and I still don’t know how she waited that long!

September knows I LOVE hiking, picnics, and everything outdoors. For weeks leading up to the proposal, she took me on bike rides, long walks, picnics, and hiking trips. Every time we went somewhere, I dressed in cute clothes and got excited, anticipating that she would ask me. The whole process was incredible and beautiful yet, entirely and utterly agonizing!

One weekend, I knew it had to be the real deal because she went all out. She woke me up on a Saturday with a giant bouquet of white daisies, my favorite, and yellow daisies, my favorite TV character Lorelei Gilmore’s favorite. Surprising me with a new pink romper and took me on a picnic, which included a little vegan octopus cake. She gave me a picture box with photos of us and quotes from our favorite love stories, and in the center was a beautiful rose gold watch.

The next day, she surprised me with another outfit and another picnic with chocolate-covered fruit, and then took me hiking. I had so many butterflies in my tummy. She proposed to me in front of a waterfall at a trail called “the eternal flame,” a very fitting name, with more cute love quotes and pink eternal roses. Everything about it was perfect!

What does the new engaged status mean to you both?

We both have talked to each other about how proud we feel to wear our rings. I still look at mine all the time and love the way it sparkles in the sunlight. I also love to show off September’s ring, which embarrasses her because I am way more outgoing than she is.

Karen & Taryn – A DIY Wedding By The Beach

Hannah & Kay – Having Faith as an LGBTQ+ Couple

A Rustic Log Cabin Elopement with a Hint of Western Vibes