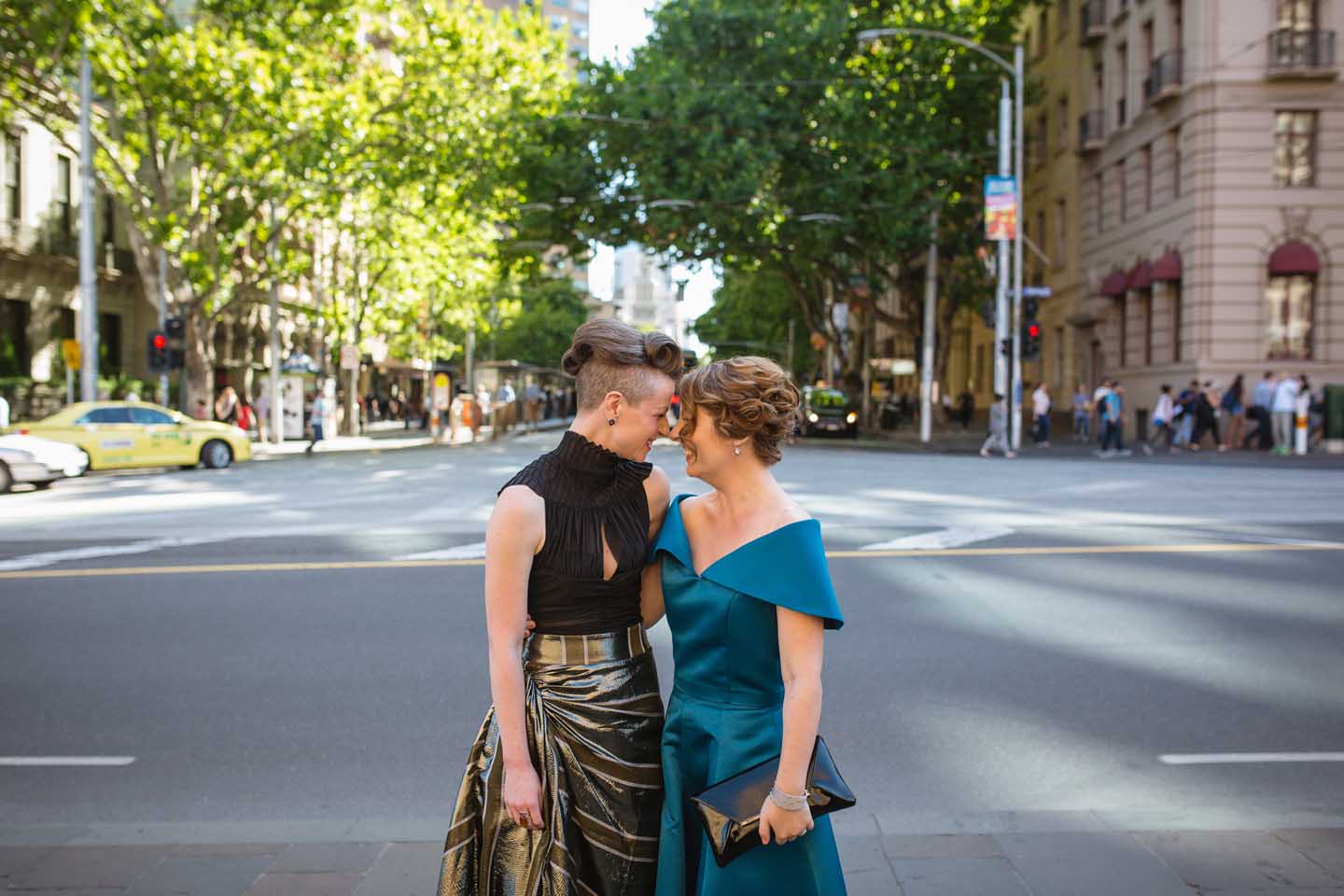 We’ve been together for nearly six years. We met in Canberra, firstly just as friends. After a month or so, Ana told me she was leaving for a short period to work in the Netherlands. I thought she was brilliant and beautiful at this point, but she had a bit of a poker face, so I didn’t actually get a read on her sexuality or what this was or could become. We managed to get in a few coffee dates before she left. On the first of those occasions, Ana suggested that I visit if I happened to be in Europe. Later, she gave me more specific dates that would be great, you know, if again, I just happened to be in the Netherlands.

I can be pretty dense, but I figured things out and made sure I ‘just happened’ to be in the Netherlands. I had recently come back from Nepal and had scant leave left, but I think my boss let me have time off because the whole thing so amused him.

Our engagement was pretty low-key. So low-key that it may not have actually happened. It seems to have become a known fact that marriage was definitely in our future. We always talked about it quite casually as if a mutual, unspoken proposal had already taken place.

Thinking about it now, we both really like how organic that was.

At some stage, we bought each other some cheap little engagement rings at a market. Later we found rings that we liked more, so bought those and would either swap between them or wear them on whatever finger they fit. Because of that, and there was no formal announcement, most people didn’t know we were engaged.

There was a big moment where we honestly couldn’t fathom what we had embarked on. We are not the sort to wear much, or in my case, any makeup, and I find it a constant battle to get my hair do what I want. So, we began to feel that in buying fancy dresses, booking a professional photographer, and getting ourselves dolled up in ways that didn’t immediately ring true to us, we had somehow become part of the great wedding money machine. That was actually very stressful. The idea of inviting our friends and family to share in a day that could become artificial in its pageantry was extremely uncomfortable.

Several months earlier, while at the Dior exhibition, Ana took some sneaky photos of a dress she fell in love with and wanted as her wedding outfit. She got it made in a teal coloured silk in two days by an extremely dexterous seamstress.

My outfit was off-the-rack Matičevski. My bridesmaid suggested the designer, and my sister ended up picking the winning outfit.

We hadn’t been to the registry before. As marriage equality wasn’t yet legal, we had initially applied for that romantic ‘legal status only’ available to us at the time of a registered relationship, and our invitations went out under the non-descriptive offer to “come to help us celebrate our relationship.” The legislation passed for same-sex marriage, and we managed to squeeze in a change of status to a wedding.

The room the ceremony was held in dictated the number of guests we could invite (50), which ended up being the perfect amount. It really was our nearest and dearest, sans a few relatives who are overseas and couldn’t travel.

Friends of ours own Bad Frankie, and it was really exciting to share it with people who had yet to go there. The same friends told us about Rupert on Rupert, which we went to, loved the food and vibe, and booked the venue as soon as was possible.

It turns out we love a good frock, and getting made up was a bit of a laugh. Our photographer took many beautiful shots that remind us how delightfully genuine the day was.

You can find more information on Rupert On Rupert HERE; handpicked as one of our preferred vendors that work inclusively of diversity.