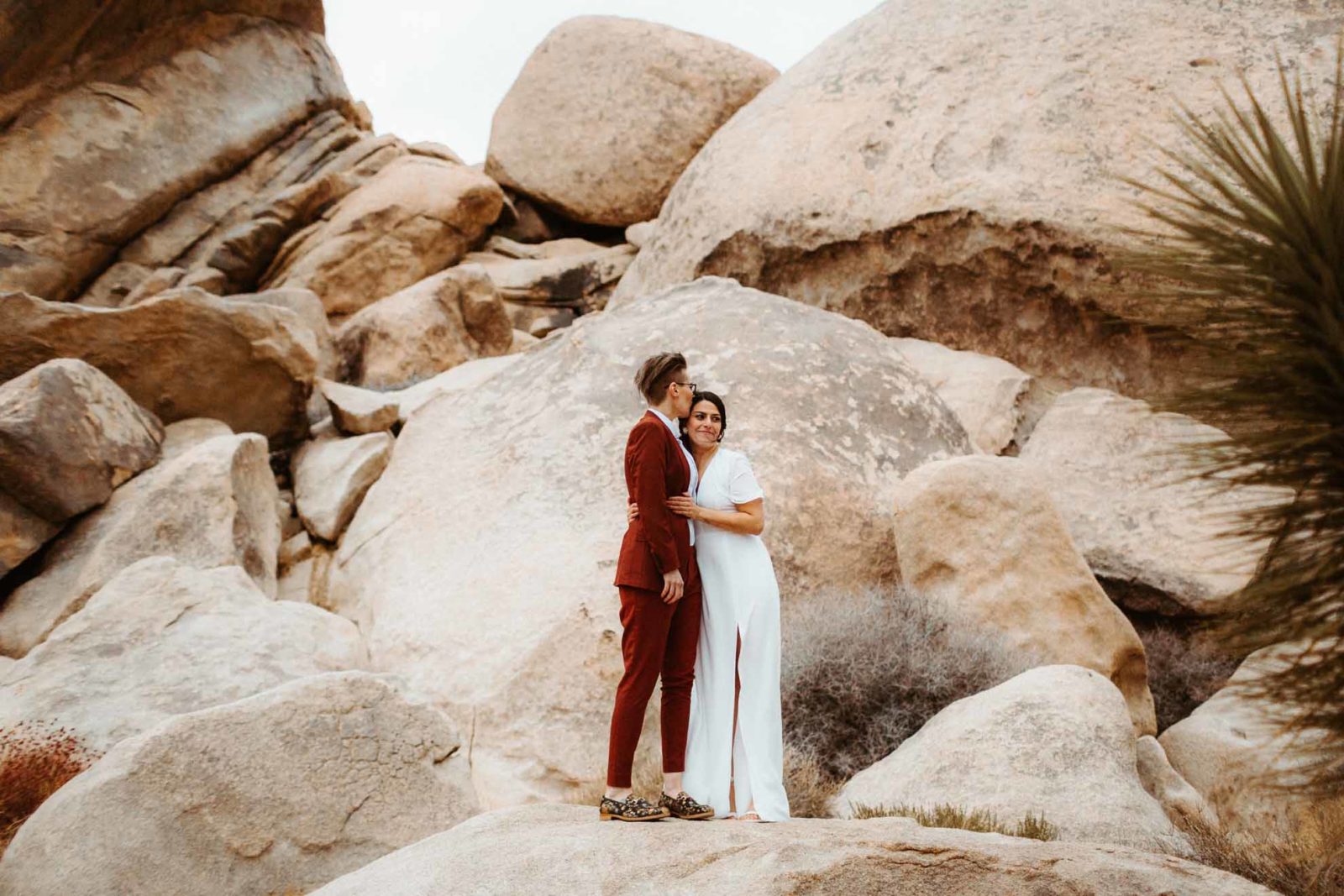 While they were co-workers at first, after coming out and a divorce, Jenni & Kelli’s love story began. After rescheduling at the last minute, they eloped to Joshua Tree. Just the two of them and their photographers in tow.

Talk to us about your love story. And your journey through coming out, divorce and falling in love.

We’ve been together four years and met at an entertainment ad agency. Kelli was an editor, and Jenni was a producer, and we worked on a lot of projects together. It was amazing to start as co-workers first. We had to problem solve together and be creative- we always had fun even under stress. We think it’s a huge reason why we communicate so well and are such a strong team.

J: I was also coming out and going through a divorce within months of starting at this new job, and Kelli was a fantastic friend and support through it all. Looking back, I definitely had a crush on her for a while before anything happened. I always think, “before I met her, I didn’t even know myself.” She’s my best friend and understands me more than anyone. Getting together was unexpected, but when you know, you know!

Tell us about a moment together that you’ll never forget.

One story we’ll never forget is when we first slowed danced together. In Kelli’s kitchen at her new apartment, we played a bunch of oldies, and it was also Jenni’s first time hearing Kelli sing (which made her melt). Things were perfect until we heard a crash down the hallway and saw that Bosley (Kelli’s cat) had somehow completely flooded the bathroom! We were frantic, trying to clean everything up but never got stressed. The music kept playing, and we were laughing and saying, “of course this would happen after this romantic moment”.

I think this story mirrors our relationship a bit- we’re always ready for anything.

In February 2020, we bought a cabin in the mountains to escape from the fast pace and intensity of living smack dab in the middle of Hollywood. We couldn’t wait to spend the night there, and when we finally did, the place was practically empty. We set up a fancy air mattress on the living room floor, cooked dinner together, and turned on a ‘fireplace’ on a laptop. After dinner, Kelli got down on one knee and said to Jenni, “I have another surprise for you. It’s another adventure…” and proposed on the living room floor. The next day it snowed, and we Facetimed our family and friends to share the news. It was intimate and pure magic.

Why did you decide that an elopement was best for you?

We both really wanted to be married, we talked about it all the time, but a month after we got engaged, COVID hit. Even though a date was uncertain, we decided to start planning for when things became safe again. Every time we sat down to plan, extra pressure would pile on, and we kept asking ourselves, “what is most important?” and that was to be wives and make this lifelong commitment official.

One night we were lying in bed and literally Googled “Joshua Tree Elopements” (the desert is a special place for us) and found our photographers, The Hendrys website. We laughed as we read their bio because we had so much in common. So we decided right then and there to reach out. They wrote us back quickly, and we instantly knew this is what we were going to do. It was a tad impulsive, which is very us, but we just couldn’t believe how right it felt. After we decided on an elopement that would be just the two of us, every decision from then on shifted back towards us and our love and away from everyone else’s expectations. Which also felt like a great representation of us as a couple.

How did you go about telling your family about the elopement?

We both grew up religious (Jenni was raised Mormon, and Kelli was raised Southern Baptist), and we didn’t want to spring huge news like this to our families, whom we’re very close with. Our parents and siblings were the only people we told ahead of time, and we’re grateful they were so supportive. We did a group video chat the night we got married so they could see us in our outfits, and it was also the first time our families fully met. We were on cloud nine about it. Sharing the news with friends afterward via texts and Facetime calls and felt so much love. We kept hearing, “We did it right.”

Tell us about the elopement day – and having to reschedule everything two day out.

Let us start with the fact that we had EVERYTHING planned and then tested positive for COVID two days before the wedding and had to reschedule everything. We were devastated because we had been over the top safe and got it from one maskless conversation with our contractor outside.

Everything does happen for a reason, though. Shifting it a month later meant getting married at the start of 2021 (goodbye 2020). We were more rested, and we also booked a better and bigger Airbnb that looked like a work of art. There was a bedroom and bathroom on both sides of the house, and we slept apart the night before.

The morning of, we made breakfast together and watched bunnies and quails run around the front yard as we sat by the fireplace drinking coffee. It was peaceful and beautiful spending that time together on our big day.

We got ready separately in our rooms, and we blasted dance music in the living room. Which helped calm some nerves as we got closer and closer to the first look.

The first look was one of the most memorable moments for us. Kelli waited outside, and Jenni put on Odesza’s “Line Of Sight (Reprise).” An orchestral version of one of her favorite songs as she walked out. It’s hard to put into words what we felt at that moment. Looking at each other and thinking, “She is about to be my wife! We’re doing this thing!” It was one of the happiest moments and what we’ve wanted for so long.

Next up, we drove to Joshua Tree National Park in Kelli’s Jeep. When we arrived, IT WAS COLD- 40 degrees and super windy! We decided to cut the ceremony short and skip “to the good part,” where she declared us wives. We did a ten-minute photoshoot in the desert but couldn’t handle it much longer. So The Hendrys offered to come back to the house to take more photos. It was perfect because we had a huge range of images that we’ll cherish forever. Including a disco ball-lit dance party in the living room. The night ended with us ordering Postmates, Facetiming with our families, and eating cheesecakes (as our wedding cake) that we baked the night before. The day was perfect, and we rolled with the unexpected. We also felt like we spent the WHOLE day together, which is exactly what we both wanted.

Now that you’re married, what does the future hold for you both?

Kelli and I feel like we have already lived a few different lives together. We don’t live life by ‘checking off boxes.’ We take the path life is guiding us down (don’t resist it!), and our next chapter has begun. Six months ago, we ended our lease in LA and moved to this tiny mountain town full time. This move (and past year) has been life-changing. We’ve slowed down and had the space to think about what is really important to us and our future. We want to have kids someday, but right now, we’re taking all of this in. Jenni is evolving her coffee roasting hobby into a small business, and Kelli’s team is WFH permanently, so it looks like mountain living is here to stay for a while!

BriAnna & Katlynn – An Elopement at Yosemite