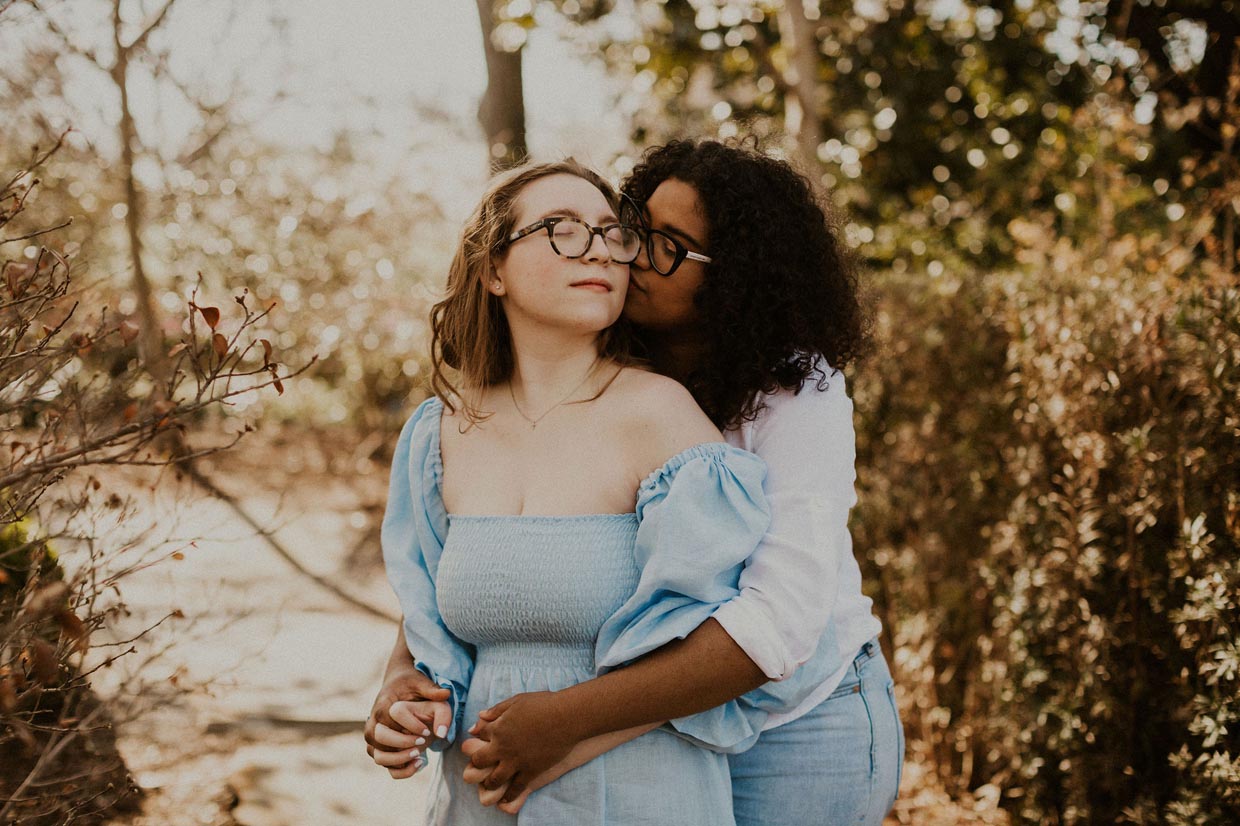 We met when we were 17 years old. A mutual friend introduced us, and we met up at Dallas Pride. I swear the crowd parted as Moriah walked towards me, wearing red cowboy boots and carrying a rainbow umbrella. I could feel the energy in the air change. I’ll never forget the way my heart swelled in my chest when her eyes met mine for the first time, and she said, “Hi,” and it was the start of the rest of my life.

We were drawn to each other, obsessed, even, for the first two months. I remember telling our friends that I would marry Moriah someday, and they all rolled their eyes and laughed! But it was all too intense, we were too young to be so enamored, and we stopped talking a few weeks after sharing a fireworks-worthy first kiss.

A year later, now in college in neighboring states, Moriah reached out to me again. We began dating, but Moriah wasn’t ready to be in a committed relationship, and I wouldn’t settle for anything less. So I broke up with her over the phone after just three months. And for the next year, I prayed almost every night that we would find our way back to each other if it was meant to be.

Eighteen months after that, now 20 years old and starting to think about our futures, I reached out to Moriah again, and we fell into an intense “friendship.” I was in Texas, where we’re from, and spending all my time writing my first book. Moriah was in Baltimore, still in college. We spent an average of 8 hours on the phone together daily. I would write while on the phone with her, talk to her about different subplots that I was struggling with, and she would make art while we spoke and send me her works-in-progress to discuss. It was a dream come true. It was one of the happiest times of my life. Four months later, we began dating again. That was three years ago, and we’ve been together ever since!

Moriah– My favorite memory is of our first official date, June 2, 2019, when we went to a Mitski concert. She was singing Two Slow Dancers, and I held Laura in my arms as we swayed in the blue light. It was so romantic. A year later, while walking through Central Park, we heard Mitski performing, looked at each other, and laughed.

Laura– My favorite memory is more recent, from a vacation we took to Sedona, Arizona, this summer. The whole trip was amazing, and it was the first time in a while that I felt so blissfully in love like we were when we first started dating – but even better because now we know each other so intimately that we just flow.

Nine months into our relationship, the pandemic began. We were both living on the east coast for college and had to move back home with our families when our schools closed. A week later, Moriah’s stepfather assaulted her, and her mother kicked her out with nothing, no money, and nowhere to turn. She was effectively homeless for the next six months or so, moving around between Airbnbs, hotels, and my family members, who generously took her in.

This kind of struggle was never in the realm of possibility for either of us. We’re both lawyers’ kids and never knew financial hardship before this. Moriah lost all forms of security – financial, housing, and her entire family – all in one day. As you can imagine, it changed everything for us. I was a witness to Moriah’s assault, and I was left with severe PTSD. She was damaged emotionally and physically, as the assault left her with a concussion and severe PTSD. And all this in the middle of a global pandemic.

I spent the next three months creating and sharing a GoFundMe campaign for Moriah. I’ve never fought for something so hard in my life – because it wasn’t about me anymore, but about the person I loved so much, more than I even knew, who needed this to survive. I truly think the universe was looking out for her because, by some miracle, I was successful – all thanks to several hundred strangers who were there for her when no one else was. As a result, Moriah got an apartment, a job, and therapy and began rebuilding her life.

That was almost 2.5 years ago now, and we are still rebuilding. Everything changed on that day. There is no replacement for family, and Moriah can’t get that back, but we have become family to each other.

A year later, I got very sick with an autoimmune disease that sent another shockwave through our lives. My path toward healing is a long one, and for now, I experience life with this disability. Yet again, we adjusted, and Moriah proved to me that just as I supported her in her darkest hour, she is here for mine.

We now live together in Dallas, Texas, happier than ever despite everything we’re dealing with and working through, and I mean it when I say I wouldn’t want to be doing it with anyone else.

Is there anything else that you would like to add?

Laura– You can’t tell from these photos, but a year and a half ago, when we took them, was one of the lowest points of our relationship. We were both struggling with PTSD and depression after the events of the year before, and our future as a couple seemed bleak.

I never thought I would be in such a serious relationship at this point in my life. I always imagined “true love” to be something that happens later in life, that hits you all at once, and stays in that honeymoon phase forever – because that’s what happens if it’s real love, right? But I feel truly blessed to say that life and love turned out to be nothing like I imagined. In just three years, we’ve gone through things that many couples don’t experience in ten. It’s been hard – harder than I can express on these pages. Trauma and stress had us close to breaking up many times. But the thing I’ve learned about love is that you have to choose it.

I think some part of me knew when I met Moriah that she was the one, but that feeling was tested many times over the years. It’s been almost six years now since we met, and neither of us is recognizable as the people we were back then. We’ve grown in more ways than either of us could have ever imagined. We’ve seen each other at our very worst and have been the very worst to each other (trauma can do that).

At some point, when things were at their most challenging, we realized that our choices were to either let the terrible things that happened to us continue hurting us and rip us away from either other – or fight for our love. We decided that our relationship would not be a casualty of our trauma. And since then, every time, every day, we’ve chosen to fight for each other. We started couples counseling and learned self- and co-regulation skills. We learned how to work as a team against our problems and stressors instead of against each other. And that vacation to Sedona in June was when it all came together for me when the past two years of pain, struggle, and grief began to feel like our past, and our future became sharper relief. We stood on an orange rock, looking out over the valley as the sun set, and Moriah said, “I can picture us getting married here.” For the first time in two years, I could too. So that’s what we’re walking towards now, hand in hand.

Becca & Kim – A Queer Wedding with a Bounce House

Janet & Monica – A Flower Boy and a Blue Wedding Dress