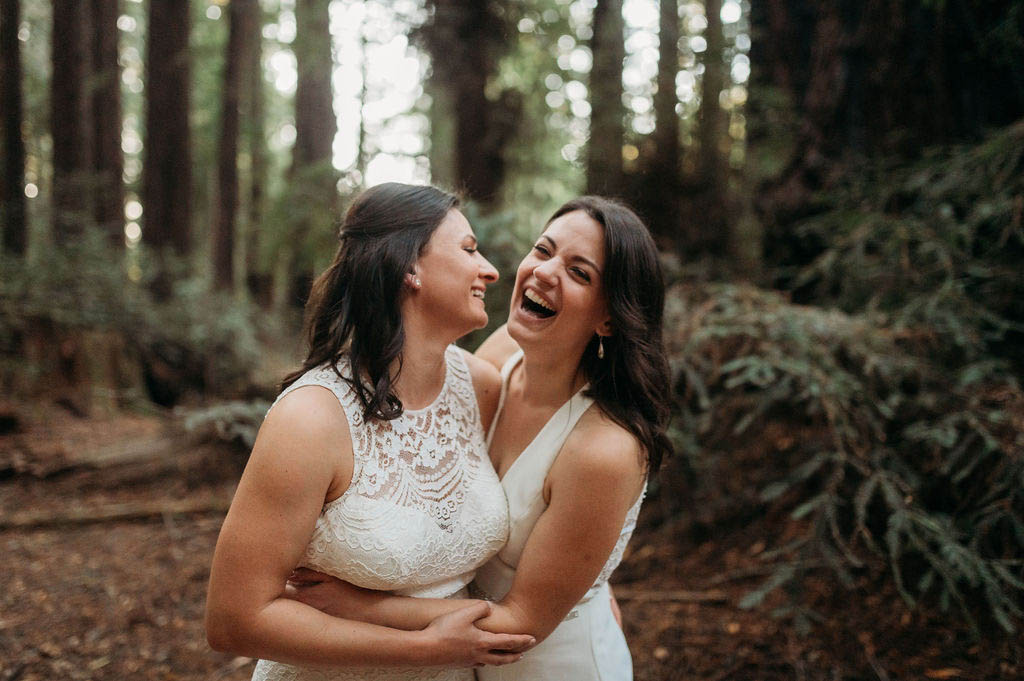 The pandemic canceled wedding plans twice, however third time was a charm. They spent the day exploring San Francisco and ended their day amongst the Redwoods of California sharing intimate vows and becoming wife and wife.

Tell us your love story.

We have been together for about 2.5 years, although we met six years ago. Margaret’s first cousin is one of Petya’s close friends who introduced them during a New Year’s Eve party.

While we were both in relationships at the time, we remained in touch through social media. Eventually reconnected three years later, sparking the fire that would lead to us choosing to spend their lives together.

When we had just started dating, we lived about 2.5 hrs from each other. We tried everything to alternate visits and not to let the distance get in the way. Our usual meet up spot was in a cute little town halfway between our two homes. We would usually grab a cup of coffee or dinner and just talk for hours by a lake. One night on a particularly warm and clear night, we climbed on the roof of Margaret’s Jeep. We laid down, and just watched the stars – a perfect moment.

It’s also the moment Petya finally got the courage to grab Maragaret’s hand and to ask her to be her girlfriend officially. Much to Petya’s relief, she said YES!

We got engaged while on a trip to Maine with our pup, Joey. Early in the morning, Petya suggested we grab a coffee and take a drive around town. While driving, Petya spotted an area which she suggested to Margaret they stop at.

It was a crisp fall day, so bundled up, we took off for a stroll through the foothills of a mountain. While admiring the beautiful fall foliage (and stopping to take some photos) Petya told Margaret that she had recently gotten their dog a new tag for her collar. When Petya opened her hands to reveal the tag, it was inscribed with “will you marry my mom”?—to which, Margaret said “absolutely!”.

That evening was spent sharing the news with our closest friends and family, dinner and drinks to celebrate. A night that ended by a cozy fire at our Airbnb.

And, why did you choose to elope?

We always knew we didn’t want a cookie-cutter style wedding as it didn’t fit our personalities. Neither one of us is a “first dance” kind of gal, nor do we love being the center of attention. What we did know for sure is that we wanted to make it an adventure, and better yet, to give our friends and family a reason to travel and experience a new city with us.

Once we settled on San Francisco, we had planned a wedding at City Hall, which would be followed by a weekend full of activities, wine drinking, and sightseeing. Unfortunately for us, our wedding was set to take place right as COVID-19 had slowly begun shutting down the country.

We initially postponed our wedding day to 6 months later, hoping everything would have passed, and we’d still be able to share our special day with our friends and family. Unfortunately, seeing as the pandemic was still unfolding, we knew we had to once again change our plans. After much contemplating, a few back-and-forths, and some research, we had a plan! We would fly to San Diego and take the Pacific Coast Highway all the way up to San Francisco, making each stop along the way a mini-adventure. Our ultimate stop would be at the end, where we would get married in the famous Redwoods of California.

And was the day of the wedding everything you hoped it would be?

Waking up the morning of the wedding, Margaret was a ball of nerves while she anticipated all the little and big moments that lay ahead in the day. Petya on the other hand was bouncing off the walls with excitement!

Even though we were showing our emotions very differently, we were ultimately coming from the same place – pure joy awaiting the moment we get to marry each other.

We met our photographer at the top of Potrero Hill in San Francisco – a spot that offers unbelievable views of the city. Standing in front of the breathtaking cityscape, we grabbed each other by the hand, looked into each other’s eyes, and just knew this is exactly what we wanted. After our initial photoshoot, we headed an hour north to the Redwoods. It was the spot where we would finally get to say our “I do’s.”

Once we arrived at the Redwoods, we found the ideal spot where the sunlight was peeking through the towering trees. Saying our vows seemed to both go by in a flash, and yet each word seemed to take an eternity to get out, fighting back the tears of joy with each breath. We then walked further into the woods, exploring the massive redwood trees. Some toppled over, some burnt by the recent fires, but most of them standing tall and majestic.

As the sun was starting to set, we raced back to the city so we could enjoy a sunset walk along the beach with the Golden Gate Bridge as our backdrop. This is where we first uttered the words “wife” to each other, causing us to grin with excitement and happiness. It was a moment we had been dreaming of for so long. As the sun was fading into the horizon, it was signaling the end of our wedding day and simultaneously the beginning of our next chapter.

An Ethereal Vow Renewal in the Mountains