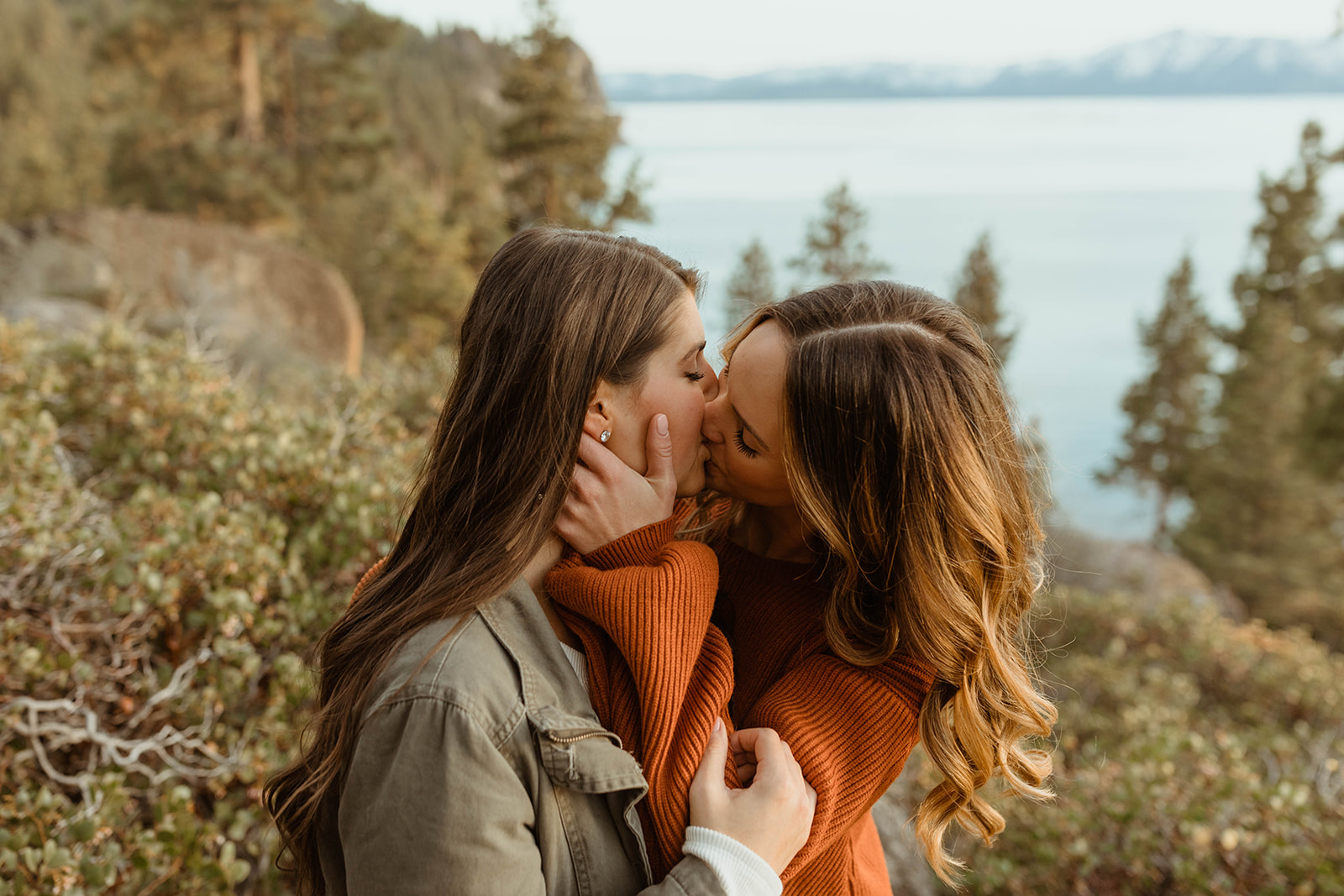 They’d been planning proposals, but they had not idea that they’d both propose at the same time, all while having Lake Tahoe Photographer, Ali Boundy, there to capture the moment!

Of course, we discussed marriage and wanting to get married, but we never discussed when it would happen. Then, Tatum started planning a trip to Lake Tahoe for our third anniversary and, without my knowledge, had picked out a ring, hired a photographer, and basically had every detail planned six months in advance.

I started to think that this was a trip to beat her to the punch- I wanted to propose first! I also hired a photographer and made a plan.

We had both been obsessed with Ring Concierge and unknowingly got our rings from there! They are both gold solitaires with hidden halos but different cuts!

It really speaks to how we are as a couple – so beyond similar yet have our slight differences.

Tell us about the double proposal.

Right before we left for our proposal, we decided to have espresso martinis which DID NOT help the nerves at all. We were heading to Cave Rock to watch the sunset dressed to the nines, not knowing it would be such a steep hike. Tatum almost ripped her jeans, and I cut my hands on the climb up.

We were a hot mess and made it with minutes to spare as the sun went down.

I was trying to set up my camera because I was going to propose and wanted to get it on video, but since we were on steep rocks, I couldn’t get my tripod stable. My nerves were at an all-time high, and I could not get my tripod set up for the life of me.

Tatum was patient but finally snapped me back to reality and told me I would miss the sunset if I didn’t come and sit down.

So the second I sat, she pulled out a letter, and I read it out loud, thinking it was just a sweet note for our anniversary. I was so focused on what I was about to say next that I realized that Tatum was beating me to the punch within seconds. She whipped out a little black box, and before she could even ask me to marry her, I pulled out the same black box-stunned that this was actually happening!

We both sat giggling until we cried for a solid five minutes before we put the rings on each other.

I had NO CLUE what Tatum had up her sleeve, and I wouldn’t have wanted our proposal to go any other way!

How are you going about choosing your key vendors?

Ali was the first person who made our relationship feel seen and beautiful. Tatum hates taking pictures, but when we met Ali, she made it so easy for us to be authentically ourselves. After that experience and then seeing our engagement pictures, it was a no-brainer to invite her on our adventure elopement!

Dancing With Her Recommended Vendor
Photography by Ali Boundy Photography

You’ll find Ali Boundy in our online directory of inclusive wedding vendors from around the world.