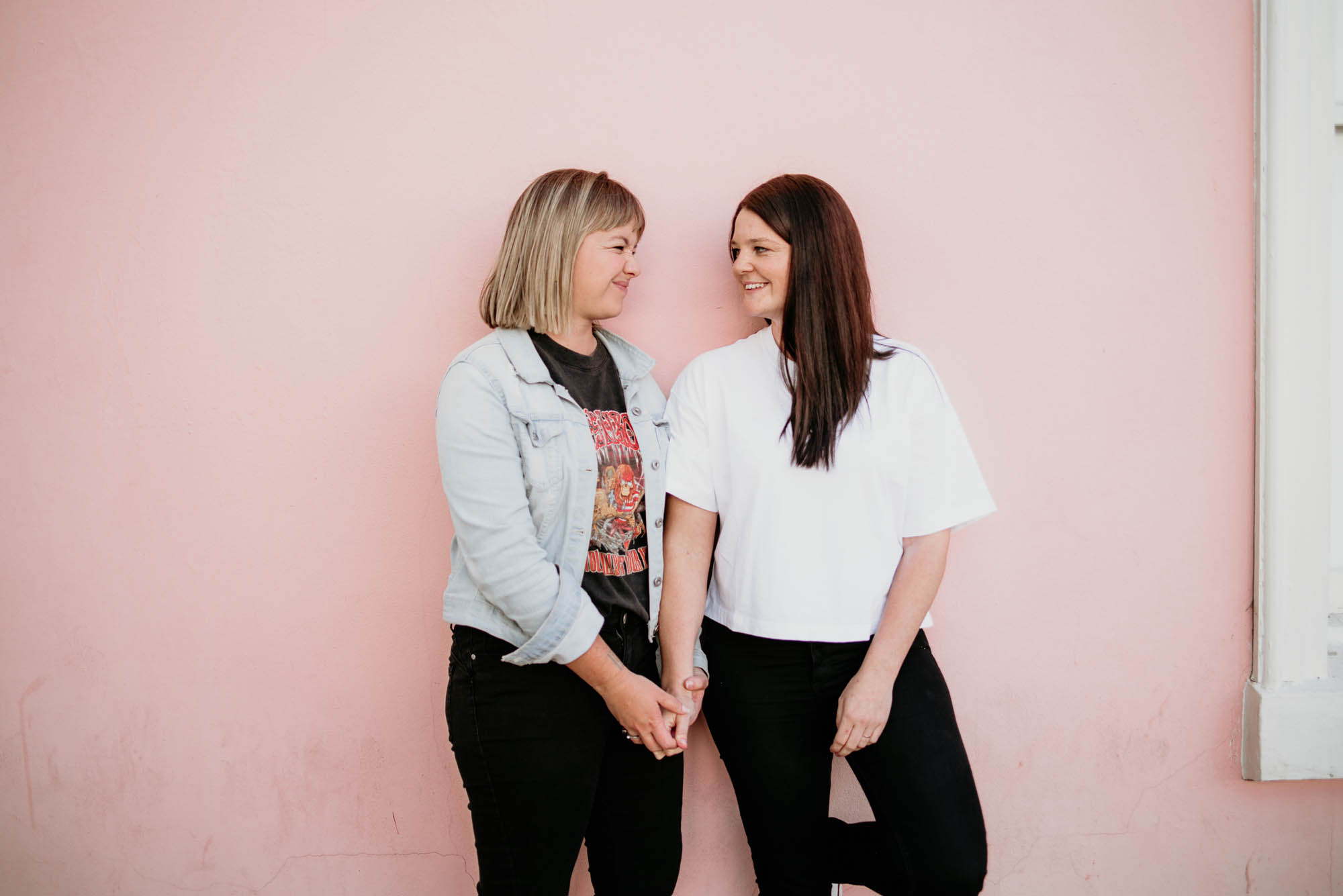 When the Founders of Dancing With Her first talked about marriage, they had no idea that Arlia would have be having brain surgery hours later. They focused on recovery and together have overcome more obstacles than they could have imagined.

I’ve never been a romantic, and until Arlia came along, I wouldn’t say I really believed in ‘the spark.’

I still remember the exact moment that I first saw Arlia. We both had just started working at the Melbourne Zoo. On this particular day, while I was washing some glasses, Arlia walked in the door. I don’t really know how to explain the feeling that I got. I was this instant ‘who is that girl? and, need to know more’ feeling. Funnily enough, it turns out that initial feeling wasn’t mutual, but persistence paid off!

It took close to a year for the timing to be right but when it was things moved quickly. I moved in from day one. Three months in, we’d named our first child and dreamt of our wedding day. Our love was intense, passionate, and something different from what I’d experienced in other relationships.

We’d been dating for a year, and Arlia’s birthday was approaching. It was the first that we’d get to spend together as lovers, and I wanted to do something for her that she wouldn’t forget. I packed her bag, and we left Melbourne for a romantic adventure to Perth. It was a perfect surprise.

During the trip, I’d planned a night over on Rottnest Island. We arrived via boat to an incredible place. It was picture perfect. An Island so small there aren’t cars; instead, you travel to its remote beaches via bicycle.

That night we rode to a beach to watch the sunset. We sat on the secluded beach, not a worry in the world, and spoke about our love and commitment. We spoke about what we meant to each other, and the old phrase ‘when you know, you know’ was thrown around. Together we sat and discussed marriage, planned who we would want to join us on the wedding day. We are both shy people, and the pressure of having a day where we would be the center of attention made us nervous. We didn’t want anything elaborate, just a celebration of love. Making the decision to elope suited us. We’d run away, get married and celebrate with our loved ones on our return.

I know that a few people reading this will know what comes next. It was the single worst night of my life.

Long story short, Arlia fell off her bicycle that night. She came over a 2m ledge and landed headfirst into a concrete path. She wasn’t wearing a helmet. It was late in the evening, and the place was deserted. I jumped off my bike, rushed down and found Arlia unconscious, not breathing, and her bicycle bent in half. I got her to breathe and called out for help.

Within the hour, she was airlifted off the island to the hospital for emergency, life-saving brain surgery to stop a large bleed on the brain. I had to wait back on the island for the first boat back to the mainland in the morning.

Easily, it was the longest night of my life. No-one wants to call their partner’s parent and tell them such devastating news.

The week that followed is one made up of nightmares. As Arlia lay in an induced coma, the prospect of what a traumatic brain injury looked like in our life was sometimes grim. There was a chance she’d never wake up, and even if she did, things could be very different. She might not be able to walk or talk, or she might lose years of her memory, which would mean she would have no idea who I was.

We’re thankful that Arlia did wake up. She woke up, asking where I was. In that time-space, she woke up, and she was okay. The only memory she had lost was the memory of us heading over on the boat to the island and everything that followed.

It meant Arlia had no idea that we had made plans to elope.

In the months that followed, we learned that while physically Arlia was relatively uninjured (she had skull fractures and a considerable site where they’d cut into her skull), there are some mental injuries that we now cope with. Our focus turned to recovery, and marriage was something that just wasn’t the priority.

A year down the track, I felt like we were starting to finally get to a place where we could move on with our lives, and although an elopement was something we wanted before, it had become important to us to have a wedding with our loved ones there.

Arlia is a trained jeweler, so I knew getting an engagement ring right was a huge priority. I wanted to use a parti-sapphire in the ring, one that was a beautiful blue/green color – the same two colors of our eyes. I actually sourced a raw stone mined in Queensland, and it was specifically cut to my requirements. It was important to me to use Australian stones and a jeweler who would handcraft a piece that would be unique. Natalia Milosz Piekarska was a perfect fit. She helped me to design and build a ring that would be perfect.

I’ll be honest; it took me a while to save and pay for the ring. In fact, the process took eight months. With Arlia out of work in her recovery, it was really challenging to balance having enough money to pay rent with and saving a little extra each week to pay for a custom-designed ring (and without Arlia cottoning on!).

I remember getting a photograph of the finished ring sent via an email. We were on holiday at the time, hiking with my Dad in the mountains. The excitement was overwhelming, and I contemplated proposing to Arlia on that trip with just the image!

Once I physically had the ring, there was a little extra spring in my step. I sat with her Mum and asked if she would mind if I married her daughter – which, I might add, was much more nerve-wracking than it needed to be! Plane tickets were booked – I planned to fly Arlia from the Gold Coast to Melbourne that weekend and propose in the city we fell in love in.

I picked Arlia up from work, bags packed, and started driving to the airport. Arlia complained the whole way about how she was tired and didn’t want to go anywhere!

We got to Melbourne and checked into our hotel. I told her that I had dinner reservations and that we would need to wear something nice. I didn’t have any solid plans. All I really knew was that I was incredibly nervous.

I decided at that moment that I’d ask her just before we left for dinner. I hid the ring under the pillow on the couch. When the time came, I pulled her in close, got down on one knee, said some words, and asked her to marry me. Arlia thought that something was wrong because I was crying and couldn’t get any words out. Through all the emotion, she said yes!

I passed Arlia a notebook that I had put together, which was a diary of the last six months. It described all of those really magical moments about getting the ring and all the feelings and emotions that I felt along the way. We went out for dinner, the hotel helped us celebrate, and it was an incredible weekend as newly engaged!

We started to begin planning a wedding day in those first few weeks, noticed there wasn’t a great deal of inspiration that was relatable to us. And so, Dancing With Her was born. Obviously, it’s become our little baby, and life plans have been put on hold to really focus on creating a community and platform for LGBTQ+ women just like us.

We haven’t solidified any of our wedding day plans. We would love to get married later in the year with a small group of our closest loved ones, but it’s hard to grasp the sheer cost of a wedding. However, we have different styles, which makes it hard to agree on things. Our biggest challenge so far has been finding a venue that fits into our budgets. With such a small group of guests (just 30), we want a beautiful space that doesn’t feel empty, yet something modern and has nearby accommodation for our traveling guests to stay.

The only real decisions we’ve made are the guest list and that we both want to wear a dress and read our own personalized vows. Oh, and the fact that there will not be haybales and the floristry and food need to be on point!

Our time will come, and I know there will be plenty of ugly happy tears flowing (seriously, I’m really nervous about my emotions taking over and breaking down during the ceremony).

In the meantime, we will continue to live vicariously through the beautiful weddings we get to share with such a diverse and supportive community.

Kloie & Hanna – Finding Acceptance Within Yourself