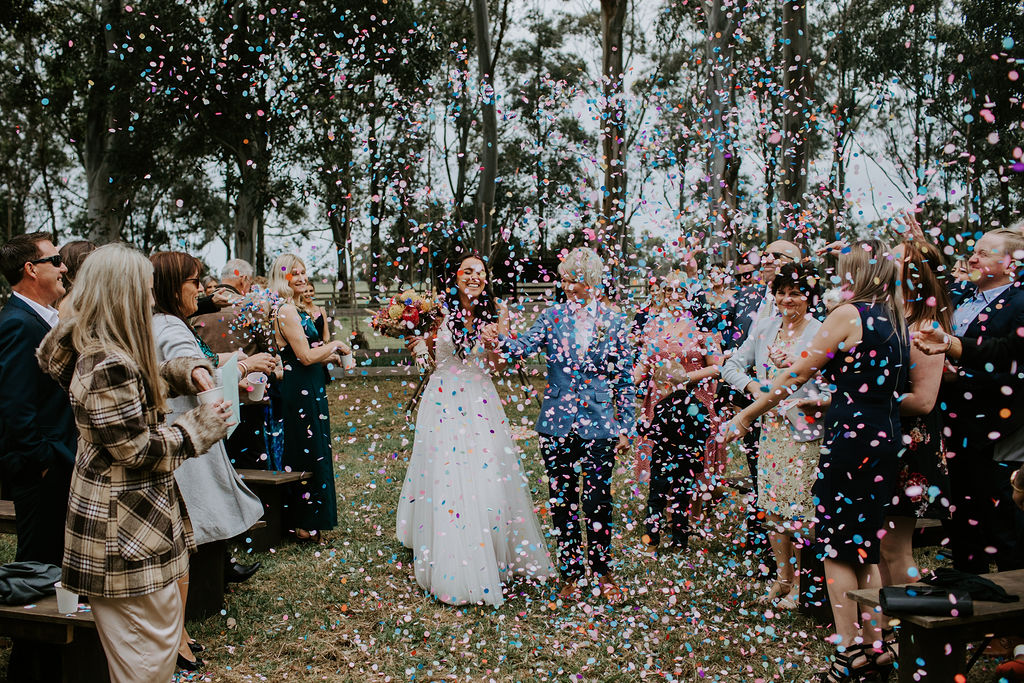 Emily & Riley married on their very own farm, surrounded by their favorite people and tipis. The day was filled with a whole lot of fun and love – wedfest style.

Who are Emily & Riley?

We are both photographers and really love when we get to work together.

Shooting weddings exposes us to so much love, and it reminds us how much we appreciate each other.

We love our farm life at our property. For fun, we love going out for breakfast or dinner and love our chill time watching TV. We have funny quirks like how we have a once a year wedgie allowance where we can wedgie the other one at random, but only one per year – choose wisely!

Together we love camping and riding dirt and quad bikes, we love going out to our local theme park Gumbuya World, and we love spending time with our friends and family.

We have been together three and a half years. Through mutual friends, we met and about two years later, we started dating.

Riley tricked me into going hiking up Mt Cannibal, and I didn’t want to go because I was sick that week. After much complaining about me not wanting to go, she was so sad, so I decided we’d go.

Little did I know she had planned a photographer friend of ours to be there, Christian from Be Here Be Now Photo & Films.

She had told me it wasn’t that hard at all, but she said it was harder than she told me when we got there. She just didn’t want me to cancel again. I was so grumpy as I wasn’t feeling up to a big hike, so I made her carry all the bags up as punishment (we had packed a picnic blanket and some snacks and her drone for some cool photos, which was the ploy to get me up there). When we got to the top, I saw Christian and thought I recognized him, but he was trying to be stealth and then I thought maybe it just looked like him. Then I noticed this guy was taking photos of us, and I was freaking out.

I started stalking his socials to see if he had said anything about being in this area. I was so distracted by this that Riley was stressing trying to get the drone up in the air quickly. She convinced me to ignore him and pose for a photo by the drone. As we stood up for the photo, she got down and proposed. I thought she was joking because she had been fake proposing to me for a while (as a joke to throw me off haha). So, I was so embarrassed as people were watching and I thought they would think we were actually getting engaged, when it’s just a joke.

I told her to stop being silly and to get up. I didn’t believe her.

She pulled out a ring, and I said, “OMG is that real?” She joked, “Nah, I got it from the 20c machine,” and it was THEN that I realized she was actually serious!

So in shock, I said yes. Christian came over, and we went out to dinner to celebrate, calling our families on the drive there.

How did you decided on a venue and the style of the wedding?

We had bought a farm in July, and we moved in thirty days before our wedding in November. We initially were having it at my brother’s property down the road, but we chose to have it at our new place as it was so sentimental with this is being our forever home.

From the beginning we always wanted a backyard country style wedding. Being photographers, we have seen so much and wanted something unique to us. We just wanted a big backyard shindig where everyone could relax and have a good time. We supplied cocktails at the caravan bar service (Lady Francesca Caravan Bar) because just beer and wine are boring!

Tell us about your wedding day.

It was amazing! The best day of our lives. We made an effort to really soak it all in. We didn’t eat, though, which we regret, we were just too distracted! Our first look was lovely and we did most of our portraits beforehand to spend more time with our guests. I spent a lot of time on the dance floor, exactly where I wanted to be. We had so much fun. Everything came together so well.

Reading my vows was a favorite for me because I put a lot of thought into them. I made everyone cry. Another favorite was when my 8-year-old nephew and I were dancing to the Friends theme song (my fave show), and he knew all the words! I was so proud of him because I am a wild fan.

I think together, a highlight of the day was exiting the aisle together. We had confetti and didn’t realize how much it’d be; it was everywhere, so much we almost couldn’t see. We walked slowly, took it all in, and it felt like that moment lasted forever. It was such a WOW moment!

Don’t listen to people who tell you what you should do. There is no right or wrong. Do what makes you happy. Do it any way you want to. And get a videographer!

I think marriage means proving your commitment to each other and showing that you mean it, you won’t give up, and you won’t run away. It means compromising on things and agreeing to love each other even when you don’t like each other.