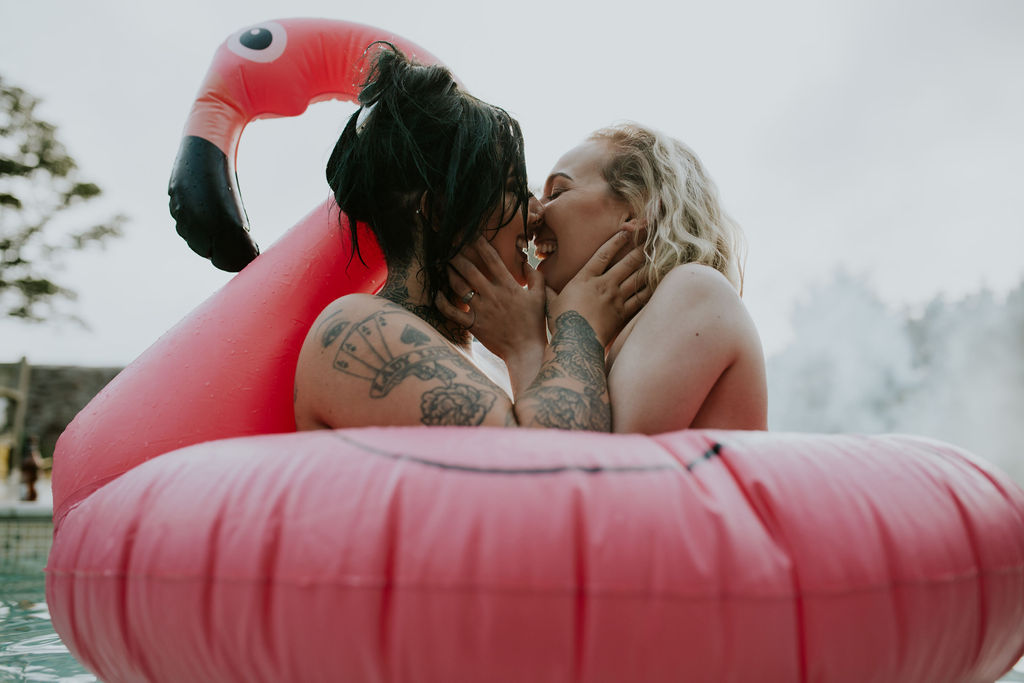 Laura and Vicki knew one another for five years before they started dating – Vicki was in a relationship, Laura was a little too wild. They celebrated their enagement in Corwell, UK, with this fun engagement shoot – naked!

We’ve been together since 2014. We actually first met in 2009, when Laura kept popping into the hairdressing salon I worked at. At the time, she liked to tell me she was passing through, but I know she secretly went out of her way to come in to see me. I was in a relationship at the time, and Laura was wild, so we went out separate ways until we met again and became inseparable in 2014.

Vicki, you proposed. Tell us about the proposal!

I proposed to Laura at her favorite place. It was in June, near Crantock Newquay in a field overlooking Pollyjoke Beach. During that time of the year the field is always covered in red poppies.

We ate a wonderful dinner before going to see the poppies, and I had planned to ask her there whilst at dinner – but I bottled it! The restaurant was full, and although we did a naked photoshoot, I’m actually shy and introverted!

I asked her when we got to the field.

Keeping it a secret was hard – I’m a terrible liar!

Our engagement meant the world to us both! Something neither one of us ever thought would happen. Finding love is a wonderful feeling!

And, tell us a little about the engagement ring.

I bought Laura’sring from a family ran jewelers online. It was hard finding ‘the one.’ I knew she wanted diamonds and not just one, so I bought her a thick platinum band with four rows of them! She has expensive taste!

My ring, however, is made of copper and angel aura quartz. Completely me. It was hand made by a lady in America called Wingostarr Jewelry.

Ash & Sasha – Being the Non-Gestational Parent of Twins