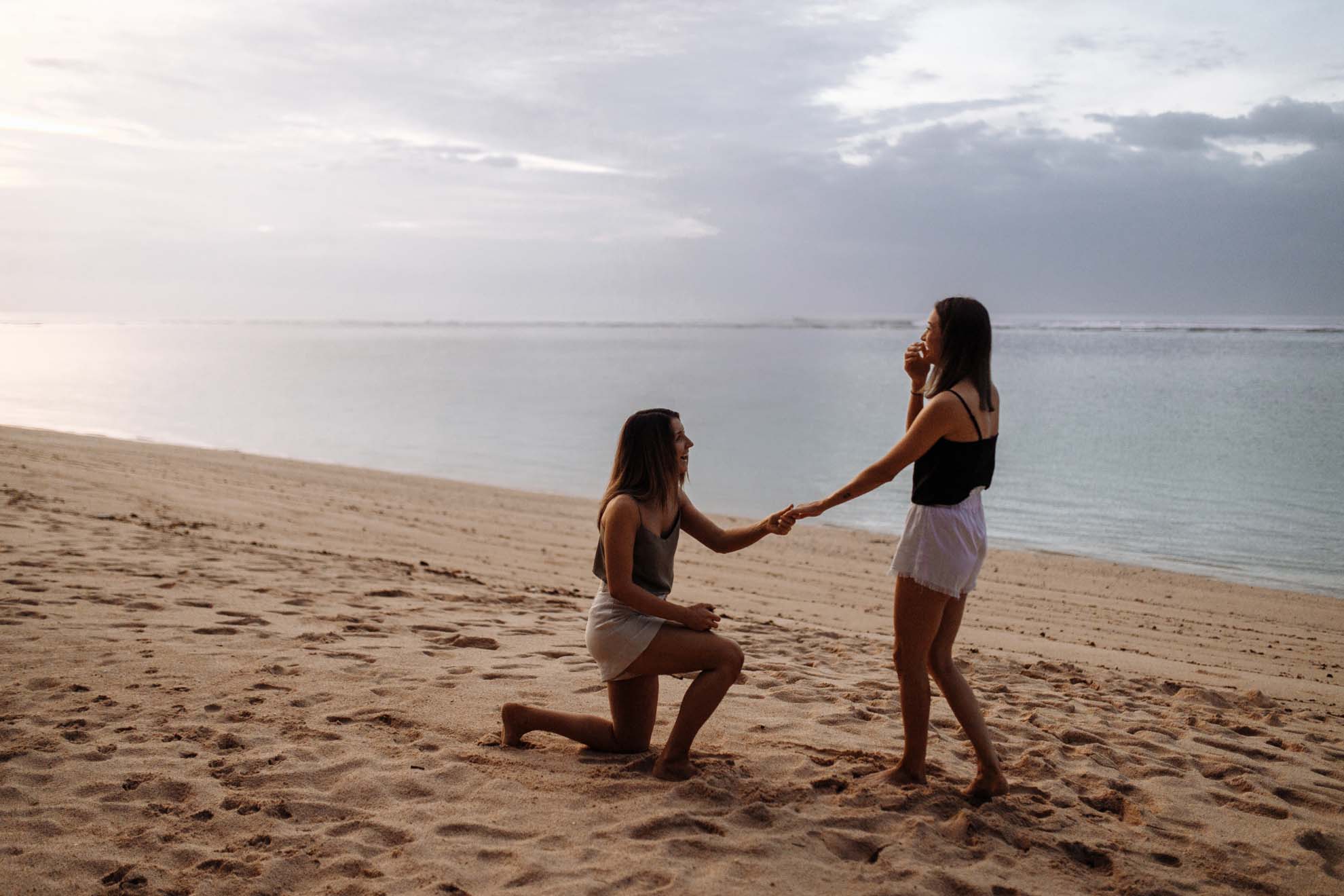 We met more than two and a half years ago when Kim first moved back from Canada to Brisbane. We started talking on the app “Her” and hit it off straight away. It was only four days later that we met up for a walk through Southbank. Kim was hungover, but Chelsea had made sure that she had gone to bed early to wake up feeling fresh and had laid out her clothes and knew what she wanted to say.

Although we had discussed getting married a lot, Kim had no idea that I would propose – it was a huge surprise.

I brought the ring two months before and kept it in my best friend’s house, in her safe. I went and saw a jeweler in Brisbane and had the ring custom made. Wanting something elegant and classy, and that is what they delivered. I got Kim a 1-carat diamond ring with a 0.4-carat diamond and platinum band.

The week before we went away to Bali, I asked my future Mother in Law to meet me for lunch. I bought her a glass of wine, and as she was halfway through drinking it, I asked her if I could please marry Kimi.

She burst into tears and said, ‘yes,’ and gave me a big hug. I told her she had to keep it really quiet. Anyone who knows my future Mother in Law knows that she finds it hard to keep secrets. That is why I left it until a week before to ask her!

I was initially going to propose to Kim at Jimbaran beach in Bali at sunset on 26th January. When we got to the beach that day, it was high tide and windy, so I had to cancel the photographer who would meet us on the beach that day. Kim and I decided we would go to a nearby beach club and have a few drinks instead.

I was freaking out that she would see the ring in the bag, but thankfully she didn’t.

I then organized to propose at the beach of our resort as it wasn’t windy there, and Kim and I had been blessed with the best sunrises there since arriving. So that is when I decided to do it there on Monday 28th January.
The night before I proposed, I told Kim that I wanted to set our alarms early so we could go to the beach and take some nice pictures together. I had organized for the resort to let the photographer in so she could meet us on the beach. When we got down to the beach, I saw her and introduced myself to her. I told Kim that the lady would take some photos of us, and I got the foulest look – Kim is super shy.

Kim went along with it anyway, and right before I was about to propose, two Bali dogs came running towards us. Kim got down on her knees and started playing with them. At this point, I had the ring in my hand, so I was freaking out, thinking she would see it. I ran up the beach so the dogs would chase me and quickly ran back and got down on one knee and proposed to Kim. It was perfect. Her response; “HELL YES!”

Our engagement has definitely brought us closer. For me, it means that this is my forever. I don’t waste any time thinking of anything else, only how we can perfect our future together

Wedding planning is going great! We have a meeting with the celebrant next week and have arranged to view both venues that we love. Both of them in Byron Bay, New South Wales, and the date that we have chosen is 22.02.2020.