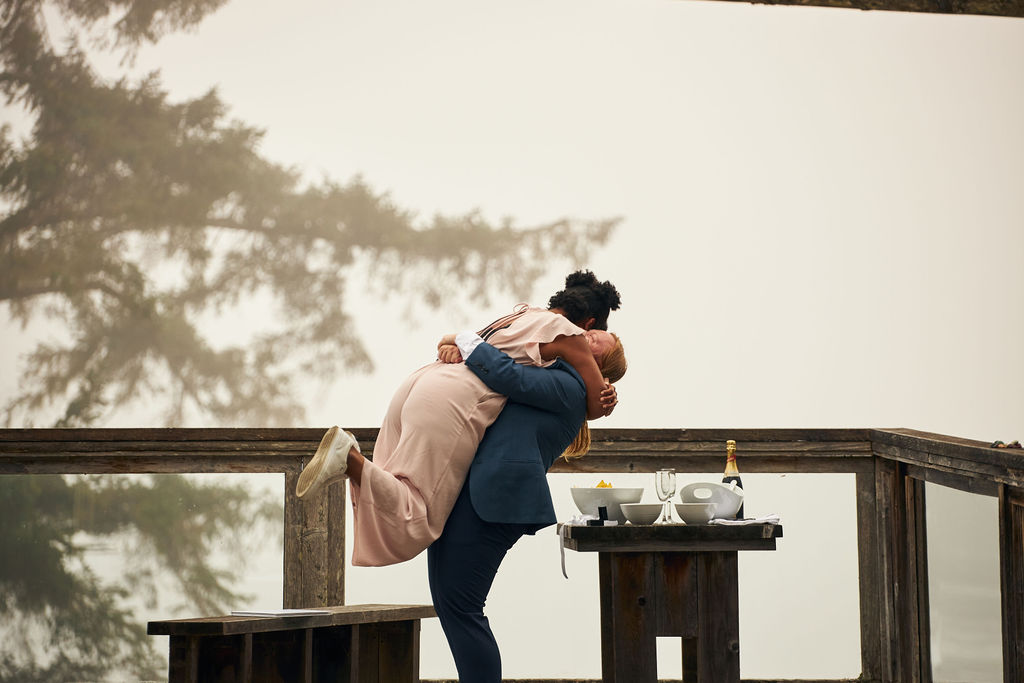 This engagement has meant the world to Clary and Percy, and has been an incredible celebration of a love neither of them were sure they’d ever experienced. Especially for Clary, growing up in a religious Black family, and as someone with a chronic illness and invisible disability there were many voices telling her this kind of love wouldn’t be possible.

Who are Clary & Percy?

C & P: Percy is a scientist who recently completed their Master of Science in International Public Health specializing in Sexual and Reproductive Health. For their MSc thesis work, they interviewed trans and gender diverse folks who have given birth in the Canadian healthcare system about their experiences.

Clary is an invisible illness and disability advocate, and CEO of Spark Clarity. Clary has fibromyalgia, which is a chronic pain condition, and dyslexia, and she brings her lived experiences as a chronically ill disabled Black Queer Woman to her work.

We’re both dedicated to our careers, but also passionate about adventure, community, and gardening! We have a small hobby farm where we grow food and flowers!

You’ve already had a bit of an adventure together finding home, tell us about that.

C & P: We’ve been together for two years. We met on Tinder when Percy was in Ottawa (where Clary was living) for work. We had two dates and then Percy left to Nunavut for two months! So there was a considerable gap between our 2nd and 3rd dates. We kept in touch while Percy was away, and when they moved to Ottawa, we started dating in earnest.

The adventures continued when, six months later, Percy got into grad school in the UK and we did an international UHaul!

Tell us about the engagement.

C & P: We’d discussed that we wanted to get engaged eventually and that we both felt that was the direction our relationship was heading; however, we were on slightly different timelines. Clary was eager and ready to be engaged early, but Percy wasn’t, and we had honest conversations about that.

A few months later, when Percy was beginning to feel ready, they kept up that narrative in order to surprise Clary and make sure they were the one to propose first!

For our first anniversary, Percy made Clary a ‘Year One’ photobook filled with all of the photos we’d taken together during our first year. During the process of making that book, Percy started to have some real feelings that this was the relationship they wanted to be in for the rest of their lives, and decided they wanted to propose to Clary.

We both feel that a proposal isn’t something to be done without serious intention, so Percy decided they wanted to wait a year from when they first decided to ask. So for an entire year, from our first to our second anniversary, Percy kept notes on her phone every time something happened that made them feel like she wanted to marry Clary.

Then, when Percy was putting together the ‘Year Two’ photobook, she put all of the notes in amongst the photos!

Where did the proposal happen?

P: We got engaged at Craidelonna Ocean Edge Lodge, where I worked in highschool as wedding staff for four seasons. We stayed there for three days under the guise of our 2nd anniversary.

I chose that location both for its beauty but also because after seeing so many couples dedicate their lives and love to each other for years, it became the embodiment of true love in the form of a place. Plus, when you’re watching other people get married, it’s hard not to daydream about your own wedding, right?

What does your engagement mean to you?

This engagement has meant a lot of joy for us as a couple to celebrate taking steps towards the life we’ve both dreamed of, and in so many ways it feels like dreams come true. It also means a lot for us as a couple existing in the world because, like many lesbian couples, we often get assumed to be friends and struggle to be recognized by many of the people and systems we interact with.

The other day we were at the beach and saw a friend of Percy’s Dad, and he said “Hello Percy, and Percy’s friend, I’m sorry I don’t remember your name” and Clary quickly quipped back “I’m not her friend, I’m her fiance” and that felt so good.

Getting engaged has also been a particularly poignant joy for Clary because it’s a dream come true that many people made her feel would never happen. In our society, disabled and chronically ill people are rarely showcased in loving relationships or presented as attractive, and are often exposed to narratives that they will always be too much of a burden to be successful in romantic relationships. This, of course, is not true.

We both feel that Clary’s chronic illness forced us to be honest with each other from the beginning, be vulnerable, ask for help when we need it, and practice showing up for each other in a multitude of ways. All of these things taught us how to build an incredible, loving, supportive, and strong love – and here we are, engaged and joyful.