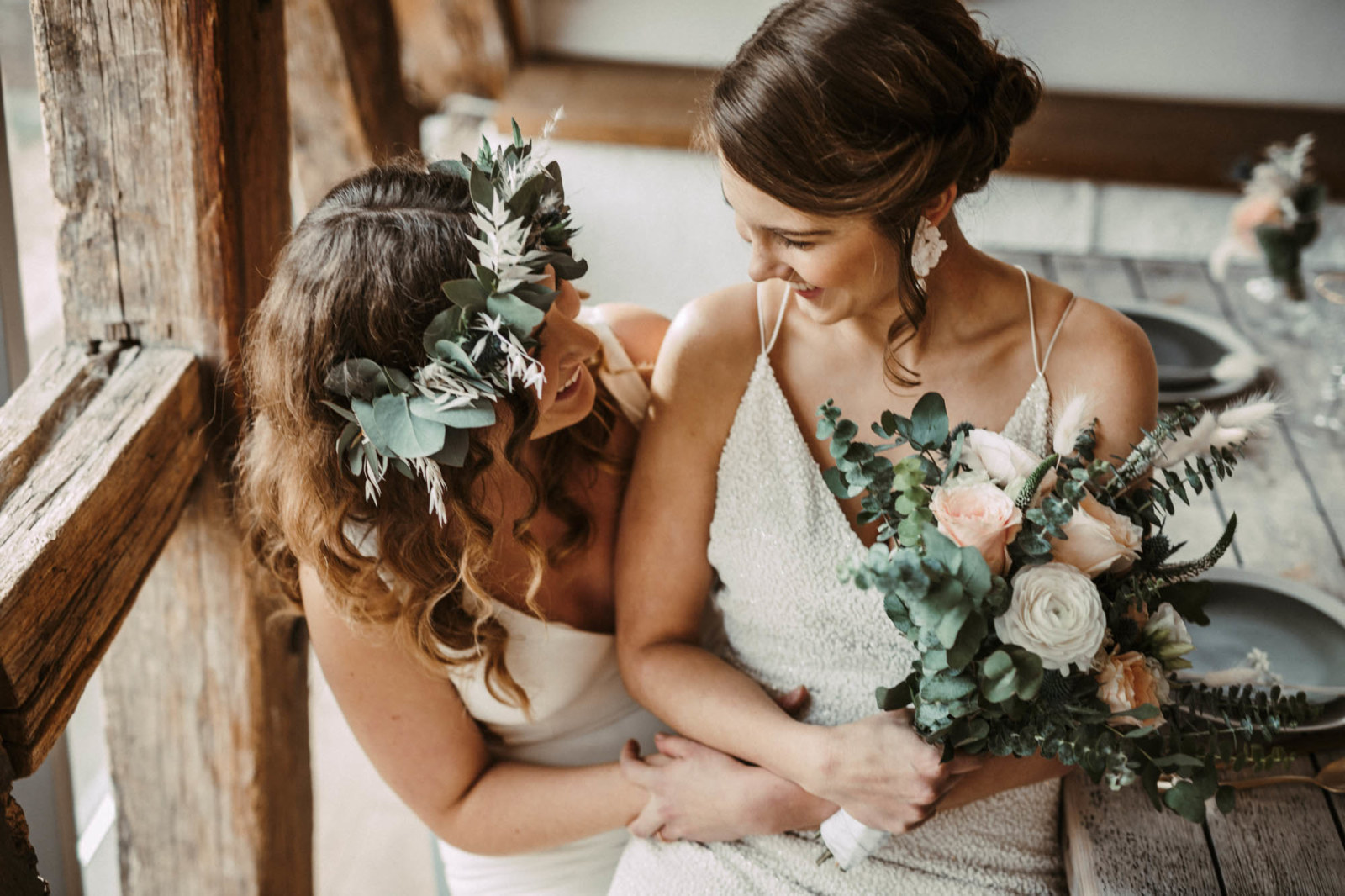 Annika & Jessie started a relationship long-distance, and when the time came to move in together it had its challenges. It was a very small apartment.

A & J: The beginning of our relationship doesn’t sound very romantic because we met each other on a Tinder. But from the first message on, we knew that we really liked each other.

Unfortunately, there was 200 kilometers (120 miles) between us, so we didn’t know how to make a first date come to life. That was until we figured out that Jessie was about to vacation with her family, something that was already planned, close to Annika’s hometown.

When the date happened, we just grabbed a picnic blanket, went for a nice walk down the river. We ended up in such a beautiful picnic area, only the two of us. We had our first romantic summer evening together and shared our first kiss under the stars.

A & J: Our favorite memory together is the evening of our engagement. It was in October 2019. Jessie gathered all her courage made a big statement.

We went to a poetry slam, and Annika thought that she was just going to enjoy a great show. Five minutes before the show began, Jessie told Annika that she would have to go to the bathroom. Instead of doing that, she disappeared behind the stage. The show’s moderator explained that today there would be a special guest, ‘Jessie.’

Jessie appeared on stage, 450 people, including Annika, stared at her.

With a self-written slam, Jessie told our love story in front of the whole audience. After that, she asked Annika to come on stage. She got down on one knee and asked Annika: ‘Will you marry me?’

The audience roared, and with tears in her eyes, Annika said, ‘Yes!’.

A & J: During the first six months, we fell for each other more and more and became more desperate to end the separation.

Somehow we really enjoyed the romance of our long-distance relationship. The train journeys, the time waiting at the train station to pick up each other, the time crying while being stuck in the traffic when there was no car moving at all, and Jessie just desperately didn’t want to risk losing just another second of the so precious and too rare time together being stuck in there. And then there were these phone calls in the evening, these countless times of us saying ‘I miss you’ and all the shed tears on the phone.

We decided that we wanted more, that we want to live together in a common city. Jessie applied for a new job, had her interview two weeks later, and actually got the job there.

She left for Heidelberg, to Annika, in her small 32 sqm apartment.

We love and curse this time.

Obviously, Annika had room in her chest of drawers. The basement was full when we started to store our things there. There was no space in the 4 sqm kitchen, not to mention the 2 sqm bathroom. Washing clothes, for example, was always a danger, because firstly the entire apartment vibrated when the machine was running. There was an acute shortage of space because we had to move everything that was on the washing machine in the kitchen. It wasn’t uncommon to need to look for the coffee machine or to find fruit everywhere in our apartment. Once Jessie found the coffee machine in the shower.

But we love that time. Because even though the bad circumstances, we did our very best to made it ourselves as much comfortable and beautiful as even possible.

Jessie moved to Heidelberg, left so much behind, and won so much from it. The 32 square meters didn’t matter because we had each other. And as Annikas’s mother used to say: “If you can live together and be happy on 32 square meters, you can do that anywhere”.

Tell us your favorite thing about one another

J: Annika is just my better half. She compliments me. Through her, I got to know new things like playing classical music and instruments. If I have no patience for something, she’s my safe rock and helps me. She is the best person in the world with whom I can talk, laugh, but also be comfortable in silence.

A: One of the things I love most about Jessie is her ability to surprise me. The biggest surprise definitely was the marriage proposal. But there are more beautiful surprises in our everyday life – sometimes smaller, sometimes bigger. For example, last year, in April, Jessie told me that we are going to visit her family. But then she suddenly stopped at the airport and asked me if I wanted to fly to Portugal with her. She had arranged everything!

A & J: In May 2021, we will get married at a beautiful country estate and then go on a long honeymoon.

We can imagine having two children in a few years. And after the birth of our second child, we would like to move into a cozy house somewhere in the country.

Kloie & Hanna – Finding Acceptance Within Yourself

Daisy & Debbie – A Wedding After 15 Years of Love