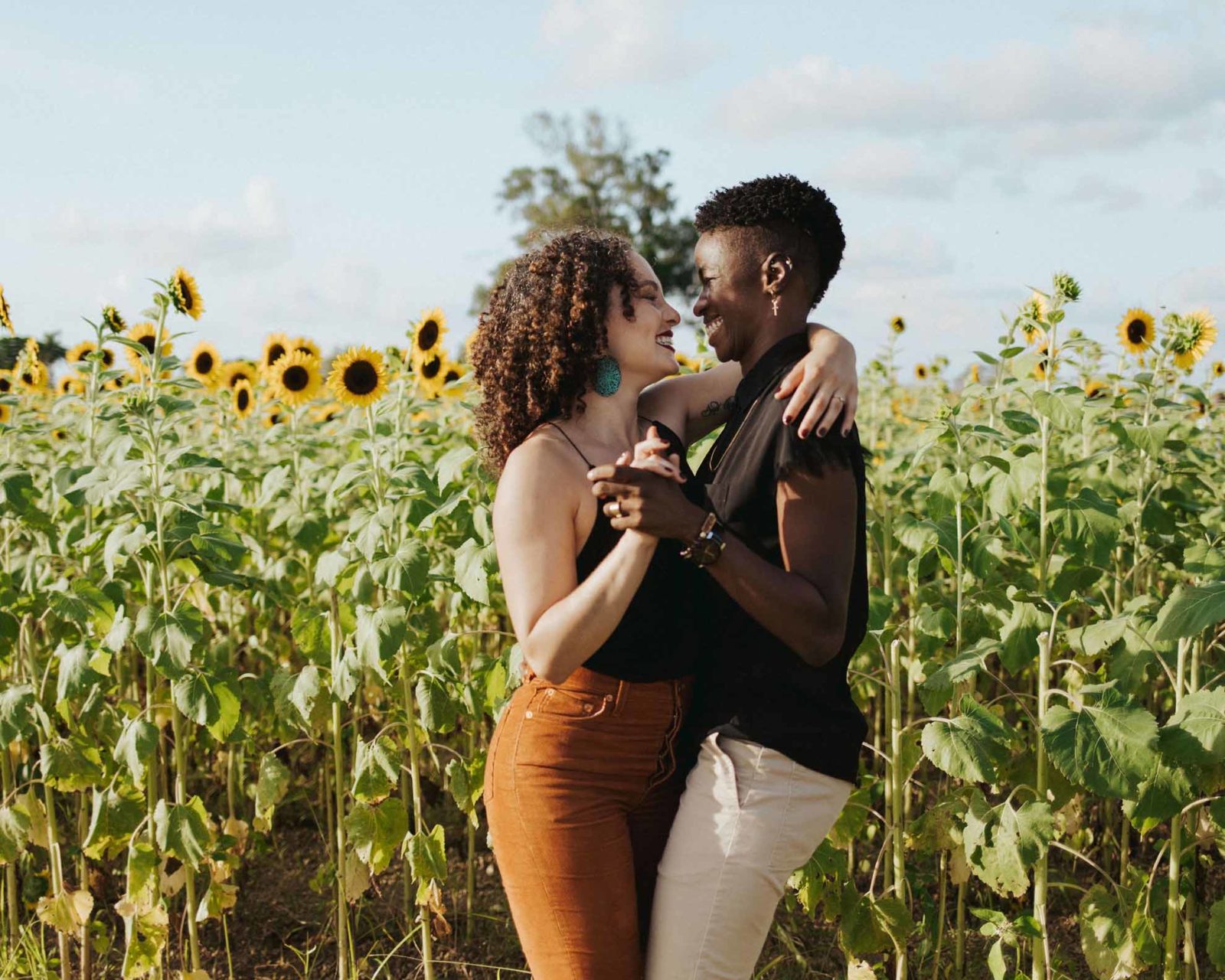 Christie & Rose – Figuring out Sexuality While Falling in Love

They both decided to propose in their living room, Sienna in a pillow fort surrounded by comics, Lana after they completed their presidential postal votes, complete with ‘I voted’ stickers on their foreheads.

Tell us about the love story between Lana & Sienna.

S: We have been together since June 7, 2017. We met at Girls in Wonderland in Orlando. She had gone with a group of friends, and I had flown in from Colorado with my ex and two other couples. We met the first day but didn’t really talk until the third when my ex and I had broken up.

At the end of the 4-day party weekend, she and her friends were supposed to go back home to West Palm Beach (3 ½ hours), and we were supposed to stay for another couple of days to visit Universal Studios and Disney World. She drove her friends back home, then turned around and drove back up and paid for a hotel room for us to stay in. I spent the rest of that trip with her, and she asked me to be her girlfriend right before I got on the plane to fly home.

I had recently graduated from my undergrad and didn’t have a job lined up, so a month later, I had a job and an apartment in West Palm Beach! We got our first cat that October and moved in together the next June.

Tell us all about the proposal.

I started planning the proposal about a year before I was planning to propose. Finding the perfect ring for her was difficult because she is both masculine and feminine, and I wanted to get her something that reflected that. I call her my princess because she is so soft and feminine, and her eyes sparkle like a Disney princess when she’s especially happy with me. Her ring is the perfect mixture since it is a band, but it is shaped like a crown and has a little bit of sparkle.

In March, before Covid restrictions went in place, my grandma came to visit from out of town. Lana had gone to the restroom, so I was telling my grandma about the proposal. When Lana came back, gram said, “So what date in June was that?” Lana, of course, put two-and-two together and knew she was talking about the proposal.

When Lana proposed to me, my ring had taken much longer to be made than she had expected. I was included in picking out my ring, the stone, and just about everything, so I knew it was coming, but she still surprised me with it the day she proposed!

How was planning the proposal?

S: On my end, Covid had just become a thing when I was finalizing the details. I was no longer able to have people from out-of-town to visit, the locations I had been planning to propose in were all shut down, and I had to work on the comic strips from our kitchen table while we worked from home. Lana is so used to looking over my shoulder at anything that I’m working on. So she saw a few bits and pieces of the comics before the proposal, but not enough to piece the story together.

As we mentioned, the ring took much longer to be made for Lana than she had expected. When she got a shipment notification that said it would arrive during my parent’s visit, she was excited but nervous. She hadn’t made any elaborate plans because she wasn’t expecting it for another month or so. Lana is not the one that checks the mail, so she had to be sneaky about checking to get the mail once it arrived. She snuck out while I was in the shower to get it from the mailbox. While she was grabbing it, she saw that our mail-in ballots had also arrived.

She planned to hide it in her closet until she was ready to propose. Her closet is right outside of the bathroom door. We don’t close the bathroom door because the cats throw a fit whenever there’s a closed door, and we have a clear shower door, so she kept thinking that I was watching her as she struggled to hide the box on the top shelf! I was oblivious.

We want to know all the details of the engagement rings.

S: I found Lana’s ring on Capuucinne Jewellery. I loved that the ring looked like a crown and showed both her masculine and feminine sides. I love how she embraces both so thoroughly! It is also a-symmetric with clean lines, both of which are favorite styles of hers. She knows that I prefer gold jewelry, so she knew I would want gold and wanted gold to match!

My ring came from Northway Studio, and we completely customized it. I wanted a Montana sapphire because of the unique blue hues that they can hold. She found one in a unique shape, and I was thrilled because it was like the stone’s shape in her ring. I love that my ring has little leaves carved into the band. It reminds me of my parent’s wedding rings that my mom made, and they also have carved leaves.

Our rings complement each other well but still show our unique personalities.

Now that you’re engaged, what does the commitment mean to you both?

S: There is a higher level of permanence to everything. We’ve started talking more about finances and budgeting, along with where we really want to go in life: if we’ll move, career changes, children, etc. We’ve also talked more about what we expect with mental health and growth and growing together.

We are currently researching premarital counselors so that we can start our marriage off on our best foot! We’ve been fortunate in the past year, and spending all the extra time we’ve spent together has really deepened our connection. We fell more in love with each other, and we’re both really grateful for the extra time we got.

Wedding planning is stressful. I keep telling Lana that I only ever want to do this once. Even if we do a vow renewal in a few years, I want it to be a surprise included in a BBQ. Whenever I get frustrated, I say we should elope. It’s tough to plan a wedding in general (I’m assuming), but it’s also been hard to feel really connected to it all during a pandemic.

We hope that our wedding is fun. We both love to dance and goof around, and we’re excited to get to do that with our friends and family. Despite all the stress, I’m happy I get to be marrying her and that the random kitchen dance parties haven’t stopped- that’s all I want for the rest of our lives.

I think I’ve learned from wedding planning with Lana that no matter how stressful it gets, remember to have fun and always keep laughing with your partner! It helps you remember why you’re going through the stress of planning the wedding in the first place- because you love each other.

Christie & Rose – Figuring out Sexuality While Falling in Love