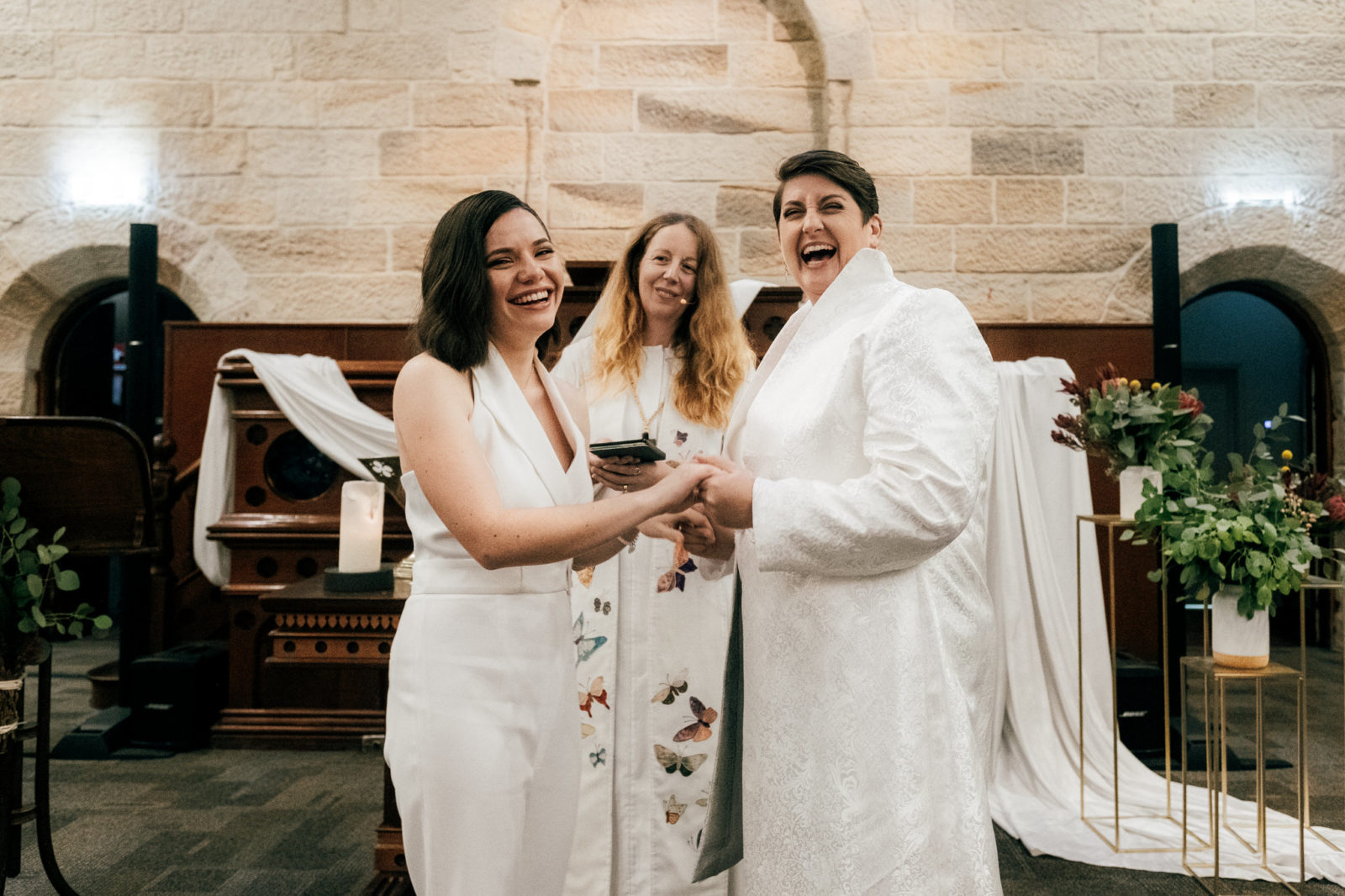 Growing up queer, I never really imagined getting married. Being stubbornly in the closet for so long meant I couldn’t allow myself to indulge in the fantasy of “falling in love”, let alone choosing to spend the rest of my life with somebody. When I (accidentally) became a full-time wedding photographer I felt like an imposter. I was trying to capture the beauty of a lifelong commitment without wanting one for myself. That all changed for me in 2017.

Prior to the legislation of marriage equality, every wedding I had photographed in my career was the nuclear couple; cis-hetero. In that time I saw all the traditions and all heard tropes, and I thought I knew what marriage meant. It has only been since the legislation of same-sex marriage that I have seen the way our queer community have embraced a deep, sacred meaning of marriage: breaking the status quo, persevering, and holding space for vulnerable people. And doing it all without the need to appease to centuries-old traditions.

Hetero weddings are rife with outdated traditions: brides are treated as exchangeable objects; parents bear the cost of the event, white is a symbol of purity etc.  Things have changed dramatically for women’s rights in the last 100 years. While there is still a lot of work to be done, a bride escorted down the aisle by her father and being “given away” to another man is no longer representative of her agency and the rights she has.

When it comes to traditions, nothing is assumed when you are planning a queer wedding. LGBTIA+ couples get to start with a blank canvas, and can spend the time choosing to cultivate a wedding that represents their values and identity without pandering to what society expects of them. Put simply, queer weddings break norms and are imbued with meaning.

Like the wedding itself, queer marriages do away with “tradition for tradition’s sake”. By their very nature, they write a new narrative that gender, and gender norms, do not play a role in the success of any relationship. Rather, it is a bespoke, vulnerable love between two people that makes marriage meaningful.

Loving with vulnerability is almost considered a default when you are identify as queer. Every LGBTIA+ person has had to reckon with their identity and, for some, it is a seismic shift in the way they are seen in the world. When it comes to relationships, we have to put our entire identity on the line in order to love and be loved.

It is especially telling when bold sacrifice is required when choosing to be joined in marriage. Queer people have a shared experience of trauma and ostracisation, and there is no better example of this than the long fight for marriage equality. After years of perseverance, the rights of queer people took a massive step forward the day Australia voted ‘yes’.

I am learning that this is also what marriage looks like: despite the odds, choosing to stick it out together and forge a pathway forward as lovers and teammates. It’s a strong bond, not easily broken.

The mainstream acceptance of gay marriage has struck a nerve throughout Australia and shown people that love is inherently rooted in the value of inclusion. And furthermore, queer relationships are intrinsically inclusive.

To even be discussing the right to marry spotlights the discrimination that LGBTIA+ people have experienced. It is incumbent on queer people, especially those who now live with the privileges of being afforded the right to marry, to stand up and advocate for all forms of discrimination. Whether it is colonialism, ableism, racism or sexism, queer relationships should be a refuge for people living on the margins. As the late John Lewis said, “If you see something that is not right, not fair, not just, you have a moral obligation to do something about it.”

Society still has a long way to go in achieving its moral obligations of providing free and fair opportunities to all. But I think, just for a moment, I’d like to relish in the fact that same-sex marriage is helping move the needle in the right direction. Queer weddings construct a new narrative of what it looks like to love beyond societal expectations, persist despite exclusion, and to be a refuge for people who have less privilege.

Hank Paul is a Sydney Wedding Photographer who specialises in sustainable and inclusive weddings. For more information, or to read more of his writing, head to his website www.henrypaul.com.au.

What Does a Wedding Celebrant Do?