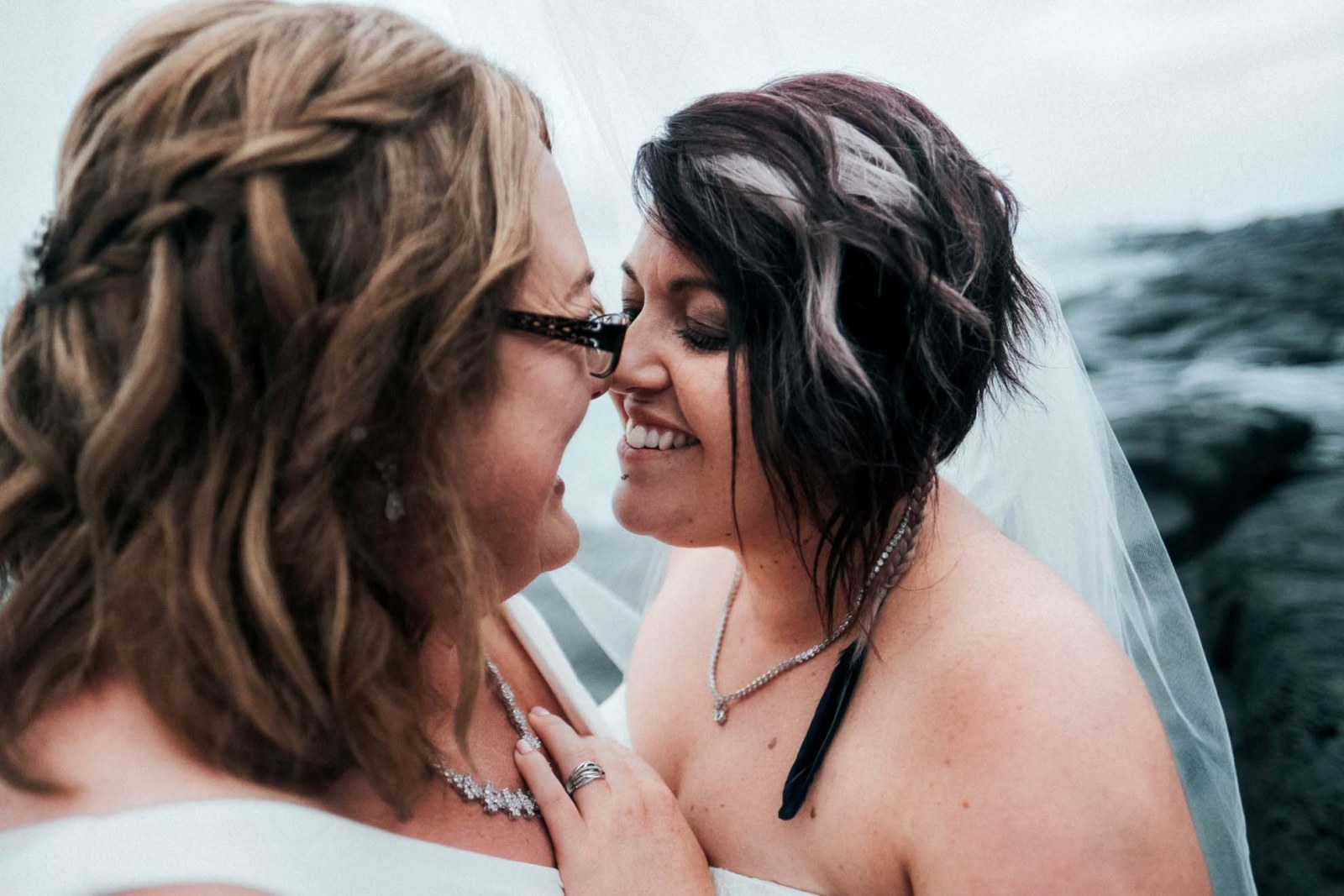 It took quite a while for these two women to know exactly how they felt for one another, but when they finally took the time to share their feelings, there was no turning back. Alex and Jacqui wed in Bawley Point, on the Southern coast of New South Wales.

Alex worked at Harrison school for five years as a Year 5/6 teacher, and in her fourth year at the school, there was a significant change in staff, including a new deputy principal, Jacqui.

They first laid eyes on each other in the professional learning week, where Jacqui ran a team-building course. Alex remembers her curly hair, big smile, and even bigger laugh so vividly. Jacqui remembers a striking green-eyed teacher coming to introduce herself that day timidly.

After a term or so of working at Harrison, Jacqui invited Alex over to hang out as friends and have dinner. Thursday nights regularly became “hang-out” night. We would take turns cooking each other dinner and stay up until 1 am (on a school night!), talking, asking each other questions about each other’s lives, staring at the moon, and even talking about the universe and how we got here.

They would always hug each other good night on a Thursday, and Alex would drive home thinking about Jacqui, and Jacqui would head to bed, wondering if Alex was thinking about her too.

They worked out quickly how much they both loved nature and adventures, and Thursdays turned into weekends, exploring dirt roads, waterfalls, cliffs, bushland, and rivers while enjoying each other’s company. After a day of adventuring, Alex and Jacqui came back to Jacqui’s house to hang out and have a cuppa. It was that night during a cuddle that Jacqui asked the ever-elusive question of: “What are we going to do, Al?” in which Alex responded with, “about what?!”. Jacqui said, “us.” And it was from then that we both told each other how in love with each other we were. And so, the story began.

Alex knew Jacqui was the one when they spoke about going camping together, spending hours on end talking about each other, life, and every little thing in between. Every time Jacqui looked at Alex, smiled, or laughed her infectious laugh, Alex felt the sunburst in her veins, and she knew she ALWAYS wanted to be part of her life for as long as the days could be, forever and always.

Alex remembers looking at Jacqui sitting at the river on one of our adventures, splashing the freezing water on the back of her neck. Alex just HAD to search high and low for a love-heart shaped rock that she could keep with her always. Braving the cold waters, the wind, and the icy Canberra mountain chills until she found the rock she was after.

When Alex gave that rock to Jacqui and Jacqui was so genuinely happy, Alex wanted to marry her right then and there. They each were always the last thing they thought about before they went to sleep, and the first thing they think about when they woke up. They each still are!

Jacqui knew Alex was the one when she had found someone so genuine and caring. Jackie knew that no matter how busy she was, any time, day or night was a good time for Alex. She knew that she had time for Alex and was always ready to drop everything to hang out or spend hours on end just chatting with her at home.

When Jacqui absolutely knew that she was head over heels in absolute love with Alex was when she went away on the school holidays and found herself thinking about her every single day and realising how much she missed Alex and wanted her to be by her side and in her life forever and always.

Alex bought a weekend away glamping at the amazing Tilba Lake camp on the south coast. She had the rings packed right at the bottom of her bag, along with a poem she had written to propose.

Jacqui had no idea what was going on during the Saturday morning. It was a beautiful, bright, sun-filled day with views over the rolling farm-land that met with the ocean. After breakfast and showering for a day of adventures, Jacqui kept asking Alex if she was ok and wondering why she was acting a bit funny and why she had to keep going to the bathroom! It turns out Alex was very nervous and lots of nervous toileting to do before popping the question!

Not long after, Alex asked Jacqui to come inside the beautifully styled glamping tent and turn around and wait for a surprise. She told her not to turn around until the very end of the surprise that was about to be read out. Jacqui turned around, and behind her, Alex was sweating and shaking like a nervous wreck and started shakily reading out a poem she had written.

We’ll spend our weeknights eating cereal on the floor, even when there is a perfectly fine table behind us.

We can go camping and lay under the open sky, just to kiss and hold hands like kids falling in love for the first time.

We’ll paint the rooms in our house and get more paint on our clothes than on the walls.

Slow dance with me in our kitchen.

We can giggle and joke our long school days away.

Marry me, and spend the rest of your weekends in daggy clothes and an unmade bed.

Jacqui turned around to Alex down on one knee with a ring. She burst into tears and wrapped her arms around Alex so tight. She cried and cried and cried and forgot to answer! Alex asked, very concernedly, “what is the answer?” Jacqui repeated “yes” a million times over through tears of happiness.

It was the best feeling ever. They spent the rest of the day holding hands walking along the beach that we had to ourselves. A perfect environment for a perfect day.

Tell us your favourite thing about one another.

I find it hard to narrow it down to ONE thing, so here’s a couple.

Alex’s absolute love and concern for others; she has so much genuine care and respect for people whether she knows them or not. I love her pure joy at learning or trying something new and how excited she gets by that. Her keen sense of adventure. I love how absolutely special she makes me feel all the time and her green eyes! She has so much love for ALL the dogs and ALL the babies – we are going to live in a baby/puppy mansion one day.

Alex also does a pretty good “emu run” (or so she calls it!), and she whips out some pretty good/embarrassing dance moves at home. Alex loves to scare me and film it. Just ask her to show you her camera roll!

I love her wild, young, adventurous soul. Her laugh and smile and the genuine warmth that radiates from her any time of the day. How much she respects me and looks after me no matter where or what we are doing. Oh, and I love her butt! I absolutely adore her pure, golden heart. I’ve never experienced anyone with such a big heart as Jacqui’s. She’s not like any other person in this world. She’s special, and she’s my wifey!

Jacqui is a pretty massive doofus at home. She has to be so serious and all boss-like at work that I think she loses all brain cells at home! She has a pretty good knack for coughing and farting simultaneously though, that’s a REAL talent!