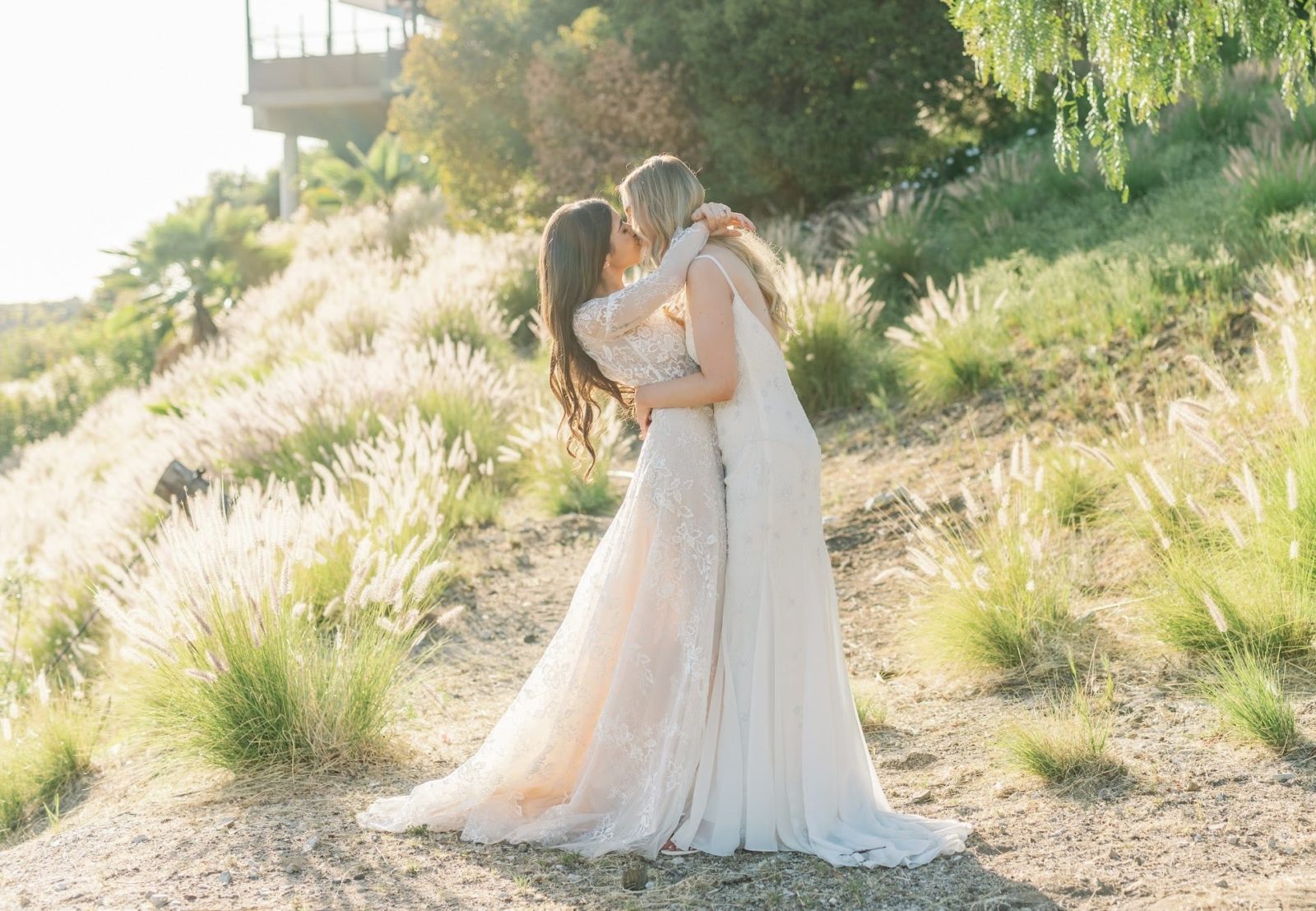 Tiana and Sophie have been together for four years, and the story of how they met never ceases to amaze them. In 2018, Tiana moved to Los Angeles from Toronto, Canada, after accepting a job offer in video production. Sophie, at the time, had moved from Ireland to Dubai, where she was living and working as a cabin crew member for an elite airline. While on a work layover in 2018 in Los Angeles, Sophie decided to be a bit nosy and open a dating app where she swiped right on Tiana.

By the time they matched, Sophie was already 8,000 miles away. Sophie sent the first message to kick off the conversation. Tiana was smitten by her kindness and intrigued by where in the world she was! After talking non-stop for a month via text and Facetime, Sophie returned to Los Angeles for work, where the two had their first official date in a famous LA gay bar. They spent the whole weekend getting to know each other and knew they had something special from that moment on.

Tiana and Sophie continued dating and doing a year of a very long-distance relationship (8,300 miles apart, to be exact). Sophie would fly to LA for work to see Tiana, and they would spend 52-hours together each time. Finally, as the long-distance part of their relationship ended, Tiana visited Dubai to see how Sophie had been living for the four years she was there. They moved in together in January 2020 to a new Los Angeles apartment.

Tiana and Sophie are a couple that communicates about absolutely everything. The two actually booked their wedding venue before either one officially proposed! They had talked about getting married, and their future together, and Tiana had told Sophie that she would like to be the one to propose first, but that Sophie would also propose back.

Tiana kept the proposal day a secret right up until. The proposal date was around Sophie’s birthday, as that was the only way Tiana thought she could “mask” what she had planned. Tiana left for “work” that day in June and asked Sophie to check the mail once she had stepped out. In the mail was a note from Tiana telling Sophie to pack an overnight bag and be ready outside in two hours. Tiana surprised Sophie by pulling up in a hummer limo that drove them all the way to a romantic house in Joshua Tree, California.

They spoke extensively about how they always wanted their proposal to be private and personal. Tiana considered this when planning their getaway. At sunset, Tiana gave Sophie her first “birthday gift” of the weekend, which was a projector that played some of the voice notes they had sent each other during their year of long-distance, all to a montage of videos and photos of the two of them. In the end, there was a voice clip of Tiana saying, “I just have one question,”… to which Tiana then popped the question.

After a very emotional, yes, the two of them woke up the following day at sunrise (5 am to be exact – the desert sunrise is so gorgeous!). Sophie took this moment to surprise Tiana and propose during sunrise. Tiana was shocked as she had no idea that Sophie had brought a ring with her to the desert! It was a very happy and emotional moment for the two of them. They spent the rest of the weekend in pure fiancée bliss in the desert.

Talk to us about the wedding day!

Every moment of Tiana and Sophie’s wedding was personal. They wrote the wedding ceremony themselves, had their best friend officiate it, wrote their own vows, walked down the aisle to a song their friend recorded for them, and had hints of them as a couple throughout the day. On April 8, 2022, they woke up, had breakfast, and then separated for the day to get ready at two separate locations. Texting each other throughout their getting ready process, they were giddy to see each other soon. Both had their immediate family and some close friends visit them for a toast while getting ready, and they headed to the venue separately.

Their one request was that they see each other for the first time when walking down the aisle. A best friend of theirs made sure that happened for them, and they are forever grateful for her organization. Tiana walked down the aisle first, holding hands with her mother and embracing their officiant friend before turning around to wait for Sophie. Sophie walked shortly after with her mother and father. Sophie’s father broke into tears when giving her away, which cued the emotions of all of their guests. Tiana, upon seeing Sophie was immediately emotional and can be seen mouthing “she’s so beautiful” in their wedding video.

And so commenced a 20-minute ceremony written by Tiana and Sophie and polished off by their best friend Duhin, who officiated the wedding. When it came time for their vows, Sophie read hers first. Addressing “Five situations” that they’d been through as a couple that she’d like to continue to action throughout our marriage. Tiana was all smiles, and when it came time to read hers, everyone giggled when Tiana stated, “Five actions she will take” throughout their marriage. The two had approached their vows with the same structure without so much as a conversation about it beforehand!

After walking down the aisle as a married couple to “Superstar” by BROODS, they had a moment to themselves to gush about it all. Then, cocktail hour began as the two took their photos together, and soon it was time for the reception to begin!

They entered the outdoor reception area for dinner, with a grand entrance to Sixpence None the Richer’s “Kiss Me” – a song they chose to start the night off lightheartedly. Tiana and Sophie sat at the head of the table, looking over two family-style tables of all their guests. The number of times they would look at each other in complete amazement over the day and how everyone they loved was in one room made it all special. With food tailored to them (like pesto pasta, one of their favorite dishes, or late-night snacks of mini pizzas), guests could really feel the presence of them as a couple throughout. The dance floor was packed all night, with the final song, “Wild Ones” by Flo Rida featuring Sia, ending the night on a bouncy high note.

Tiana and Sophie then drove themselves home that night in their Mustang; Tiana was on too much of a natural buzz to even enjoy some drinks! Two women driving home in wedding dresses singing to music blasting in their car was a sight to see.

So many parts of the day stand out to them! One of their favorite moments was when Tiana and Sophie’s best friend Duhin officiated their wedding and added personal touches during the ceremony. They also loved hearing each other’s vows, mainly because they coincidentally wrote their vows in a similar structure (which was unplanned but made for a funny moment). Finally, having all the people, they love from around the world in one place that day was a standout moment. It was very surreal to see loved ones from Ireland, Canada, England, Australia, The Netherlands, and the US in one room coming together for them!

To us, being married is a privilege. It’s a privilege to choose each other every single day and vow to be there, to share your life with someone who means so much to you. Marriage, while not necessary for a successful relationship, is a personal commitment to each other that we take seriously. To us, it’s creating a life full of joy and laughter. To interrupt each other’s stressful workdays to make the other laugh or give each other a break we deserve. It’s reading the other’s energy at any given moment and communicating without words. It’s planning getaways where we can focus on nothing but each other. Marriage to us is allowing the other to grow individually while still recognizing that we will be there to support each other as a team.

Emma & Kim – Falling in Love over a Decade