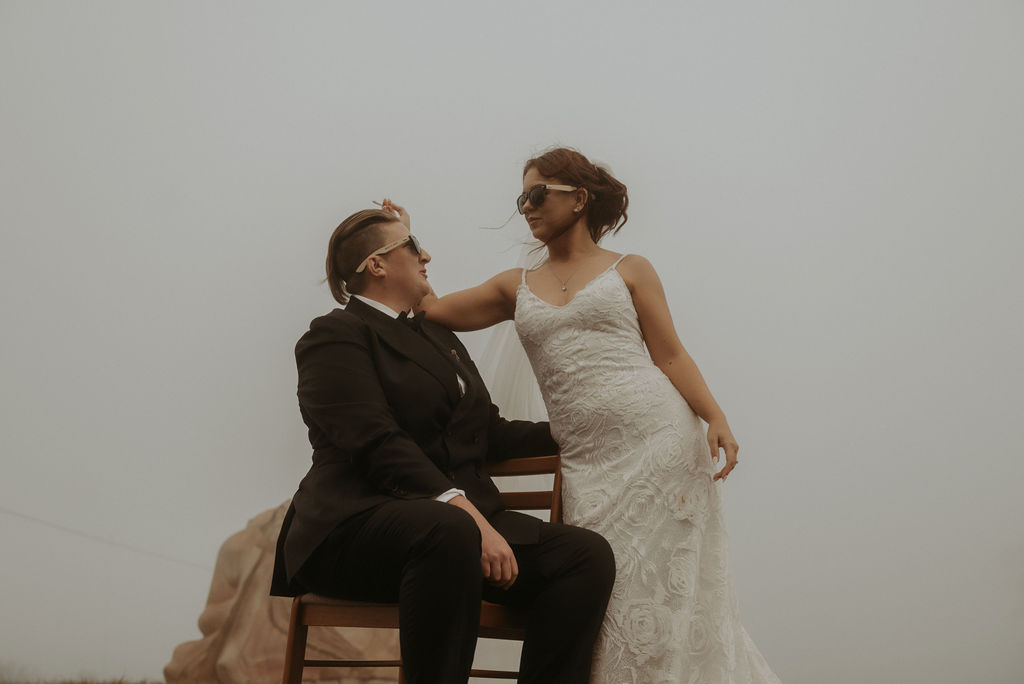 Okay, with that all said and done, let’s take this chat back, like way back to 2019 when it was still customary to meet a person face to face that you may or may not have slid into the DMs of after seeing them on the Lesbians of the Gold Coast FB page.

There seems to be some contention over who slid into who’s DMs – but that is a story for another day. Kidding Courtney, Renee absolutely admitted she hit you up first after thinking – ‘Mateeee this chick is hot, I’m going to message her.’

So, after chatting online for a little bit of time, these two decided to meet.

The Ashmore Tavern was the scene of the crime for these two love birds. And to be honest, it was almost over before it began with Renee’s car not wanting to start. She got it going eventually though – with some sage last words from her dad as she drove away – they were ‘IF YOU BREAK DOWN UP THERE IM NOT COMING TO GET YOU.’

Don’t panic folks she made it there and back with no issues.

Now back to the actual date – I’ve never been able to get much dirt on what actually happened, other than Courtney was not smooth, Renee smelt bloody good and her confidence intimidated Courtney to no end.

I have also been informed there was a first kiss, in the rain no less – and that it was amazing.

Now given this is my best friend, I’m going to spare any further details of this Notebook style make out and move right along.

I think it was safe to assume that there was some serious chemistry present, and that it wouldn’t be long before these two would be spending A WHOLE lot more time together.

Of course it wouldn’t – they’re lesbians.

So, this date led to another date, and another and before long (like in most female-only relationships) it was assumed that the two of them were dating, and they were going to be together forever. And so in March 2019 (after 30 very serious days) these two became official.

Which leads nicely to the part of the story where they knew they were in love – so folks, imagine if you will, it’s a full moon, these two were laying on the grass at Southport, looking at said moon and listening to the ocean. (For the full version of this story please come and see me afterward, we don’t have time to unpack it fully right now) But, the important parts are that Courtney felt in that moment that she had everything she ever wished for and that she could not imagine a future without this girl.

So feeling brave, she dropped the L word only to have Renee not say it back!

Now before we feel too sorry for Courtney, I think it is important to point out that Renee admitted to being in love with her long before this moment. But she was a girl with a plan.

She had been practicing how to say I love you in Africaans. And so a few weeks later, after much practice – she did just that. She mayyyyy of got it slightly wrong, but Courtney got the message and absolutely melted.

Over the course of their relationship, Renee and Courtney have done and achieved a lot together, most of which we couldn’t imagine facing in a lifetime. From Visa challenges and health concerns – to traveling the world together and learning to live as a blended family of 4.

Courtney said it best ‘their biggest achievement is staring at every Tsunami that faces them, and coming through together stronger than ever.’

I think it is also key to point out Renee has managed to teach Courtney to drive, and routinely lets her behind the wheel – and quite frankly, if that doesn’t say commitment, I don’t know what does.

And that, folks, is what has led them to this point in their lives, where they are ready to stand here and commit to each other forever.

Renee proposed to Courtney in the November of 2021 in what was, quite frankly, some of my best work. Mate – I’d just like to point out that I feel I have really carried you in this friendship and whenever you’d like to take over as leader over every cool thing we have ever done – I am ready.

Essentially – Renee planned a very elaborate picnic that was set up on the waterfront, and a night away at the Palazzo Versace. She paid her friends to hide the ring in the picnic and hide themselves in the car to film the whole thing. Now while these friends were hiding in the car, Renee took her sweet, sweet time to find the ring and actually propose – to the point where we wondered if she couldn’t find the ring.

EVENTUALLY she got sorted, got on one knee and we can only assume asked Courtney to marry her. OBVIOUSLY, through many tears, Courtney said yes and here we are.

Renee loves that Courtney is resilient and kind. She is always in awe of her strength and the way she will try new things – even though they scare her.

Renee values that Courtney has empathy and compassion – and will always show her love with massages and cuddles.

Mostly though – it seems the thing she loves most is the mutual appreciation of each other’s butts – and the fact that Courtney will not walk past her without a sneaky grab on the way through.

She did also mention you have beautiful eyes, but I felt the bum info was better.

Renee’s hopes for the future are to secure permeant residency for Courtney and Lilly – buy a home, a dog or two, travel the world together and watch the kids build their dream lives.

Now Renee, Courtney also admits to finding a few of your traits to be interesting – have an alter ego that comes out during carpool Karaoke and my absolute personal fave – that you routinely walk around the house like Winnie the pooh. All red t-shirt and no pants???

Courtney says that when they met – she had 3 rules;

Love me, feed me and never leave me. She says Renee has honoured these so far.

Courtney says Renee’s best quality is her humour – that it is the sticky glue that keeps their family together.

She values the way she passionately cares for and protects those that are important to her.

She also reiterated you smell good mate, so keep up the good work there.

Courtney’s hopes for the future are to contribute to stability in their lives, feed Renee’s love of travel and buy her the bulldog she has always dreamed of.

Folks, it is so clear these two adore each other, they admire each other and most certainly LOVE each other – so let’s get this deed done and get them married.

Dancing With Her Recommended Vendor
Celebrant The Wild Hitcher

Alora & Danielle – An Intimate Livestreamed Wedding in the Woods

A Romantic Destination Wedding in Tuscany